Looks good. You definitely have more patience than I do. Keep us posted with updates. Thanks for sharing.
F 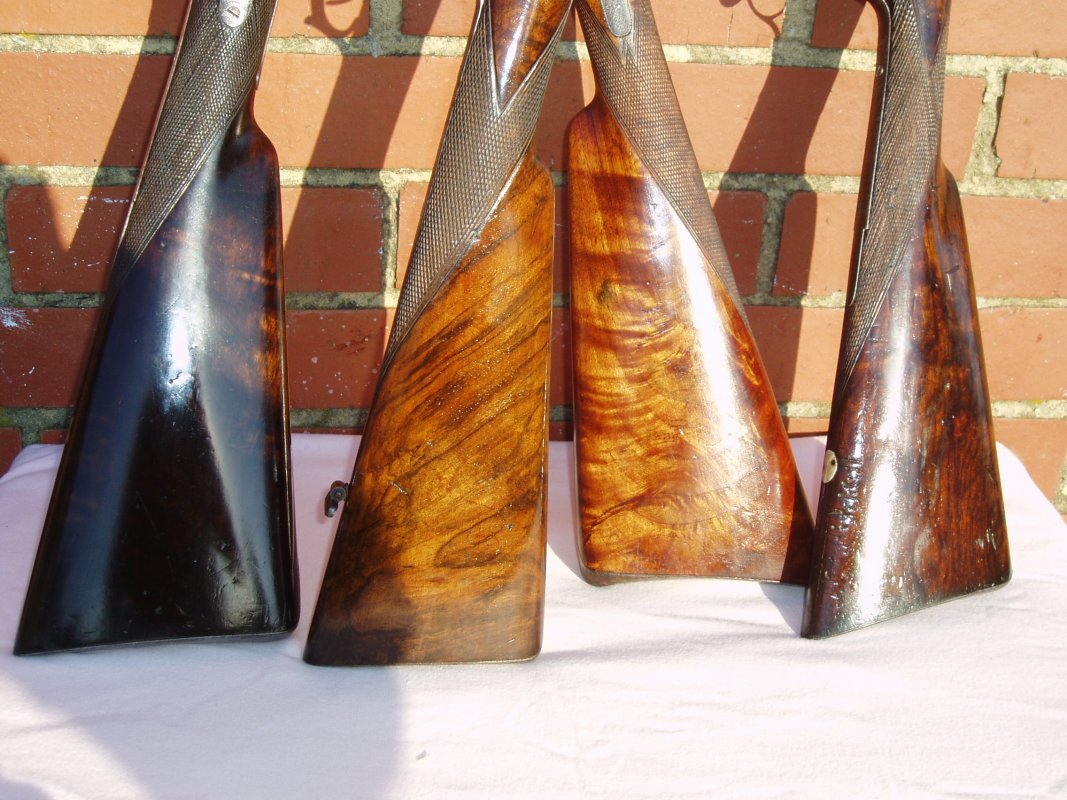 LME said:
Have you looked at the cost of figured wood lately?
Click to expand...

How much are we talking here? I make in the forties per hour straight time, and can usually pick up overtime at time and a half if I want to, so figure 60 an hour. How many hours of work does this take? If you are talking about an extra hundred bucks or so, it is probably worth it to just get the real thing. If it is quite a bit more, then it might be worth the effort to achieve a the look. I'm not opposed to spending a lot of time on a project done right. I do leatherwork, but mainly just for myself as there isn't really a market that would pay well enough for the type of custom work I like to do, but I enjoy doing it right. That usually means it is worth it to buy better materials.
L

Rifleman1776 said:
A couple years ago I tried to go into the stock making business. As part of my research I found sources for highly figured woods. Many of these 'walnut' woods were much unlike what we see with black walnut in the U.S. They were beyond description in beauty and beyond reach financially for myself, or anyone I know. I never used any of those woods for fear of ruining one and being out thousands of dollars and disappointing a client.
Click to expand...

Nice wood never was cheap. I was building a stock for rifle back in the sixties. I found a fellow that had a lot of 2X6 locally grown and cured Walnut . I payed $4.50 for a piece four foot long and this was just some old "Plain-Jane" Walnut. I have no idea what it would cost at todays prices but back then $4.50 was expensive. my weekly salary back then was $125.00. It turned out well as it made me go get more education so I could afford more Walnut! LOL!

There is nothing new in dressing up a plain wood stock. Years ago builders would wrap a plain stock with rope, leaving gaps in the rope, then use a blowtorch or even an open fire to scorch the wood in the gaps. When the rope was removed and the stock sanded, it was left with a tiger stripe appearance. I almost gave it a try on a modern rifle with a stock that appeared to be beach (very bland blonde), but ended up just trading it off. I wish I'd kept it; it was a tack driver for a cheapo.

Obviously, highly figured wood would be much preferred, but we can't all afford it. I see nothing wrong with "dressing up" an existing stock. If it pleases you, that's all that really matters. Well executed carving isn't necessary, but it is often used to enhance an otherwise plain looking stock. I wish I had the skill to do it, but someone mentioned their carving looking like a rabid beaver did it. I'm afraid mine would look like it was a rabid beaver with a couple of chipped teeth

billraby said:
Why not just use figured wood?
Click to expand...

To use a Cockney phrase --- - "Lotta wonga squire"

jimhallam said:
To use a Cockney phrase --- - "Lotta wonga squire"
Click to expand...

The Birmingham Trade used painted stocks frequently --- and so did the Italian repro trade -- in the gunroom I have a Pedersoli 12bore ML shotgun, early pattern, #15xxx and the barrels are also PRINTED with a fake Damascus. Looks great but it will wear off, surely.
(Incidentally, it is part of an estate -- - and there are a lot of good pistols and revolvers --- genuine Hege Siber, LeMat, near new M1849s etc., ROAs, 3rd Gen "Colt" Navys ... they fetch near to nothing now in the UK because most of the people who bought them after "Dunblane" (Google it!) when nearly all "handguns" were effectively banned are now gettig to the age when they are giving up. (Sound familiar?) The trouble is that they are also hard to get into the USA -- ecause they are not "firearms" you can't get an Import Licence (sorry license) so you can't get an Export licence.
As the song says -- - "Life gits teejus, don't it?" 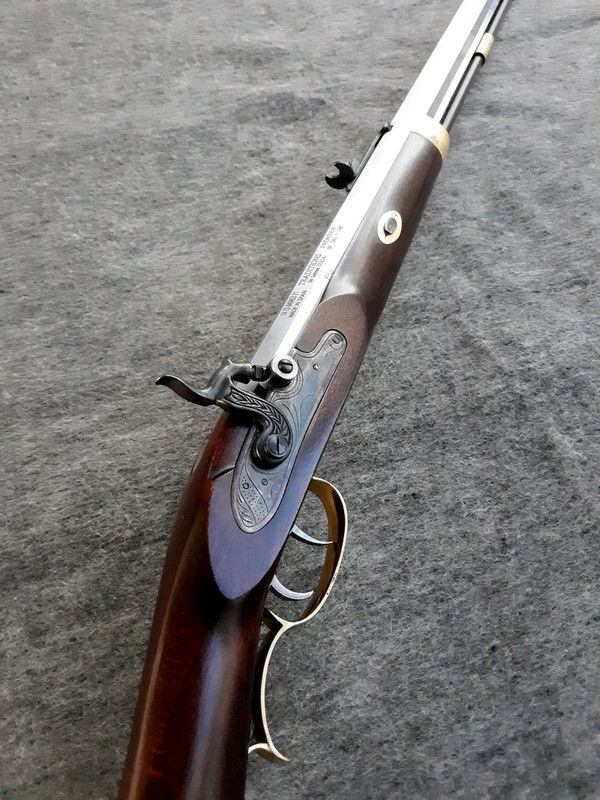 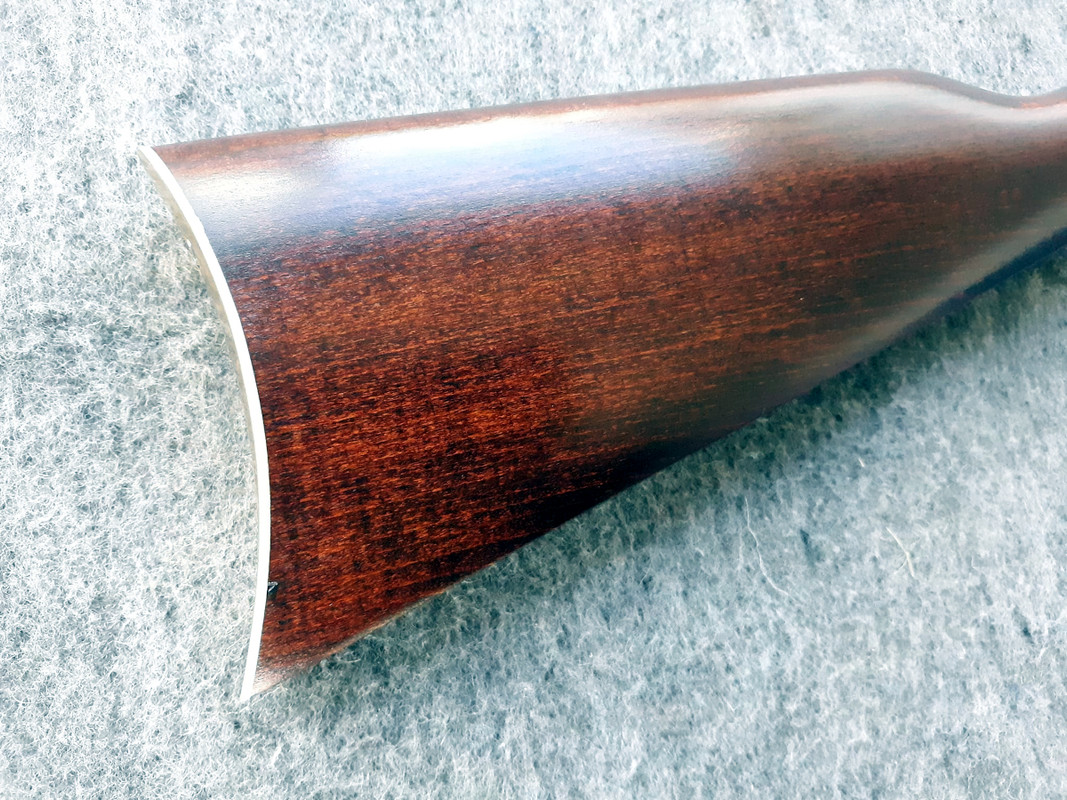 Jeffery Roberts said:
To each his own. Don’t care for faux. Either what you have is what it is or it’s not.
Click to expand...

I don't like fake anything? With that said what difference does it make if the weapon isn't an original?

Leman artificially striped his trade rifles so if you want to make an authentic copy of a Leman you need to stripe it , it is not a fake it is a copy of an origional process . Have a look at the Leman rifles in this auction 6/8/2022 - Frontier Firearms from the Lifetime Collection of Larry Ness - Lots | Cowan's Auction House: The Midwest's Most Trusted Auction House / Antiques / Fine Art / Art Appraisals

FOR SALE Curly walnut half stock