Hello,
I’m new to black powder rifles. I moved from the US to Canada and bought a flintlock so I could hunt with a firearm without a firearms license. I bought a modern replica of a .50 Hawkin rifle. The only powder I can find right now is ffffg for priming powder and fg for the main charge. Will fg work in my rifle? If so, what volume of fg do people recommend?

1 F will work, but probably not very good. Only way to tell is to load it up and shoot.
R

Depends a lot on the brand. I had some Swiss 1 1/2 Fg. that did not want to ignite with anything less than a blow torch.
S

I use 1 1/2 F in OE and swiss in percussion and no problem , but like previous poster stated 4F is the key ,with it any black will fire!!!!!!!!!! Back in the day they would have all been (KILT) with the powder they made/used otherwise !/ED

Welcome to the ML forum, Andy.
I've never used any I-F but it still may work fine in your flint rifle. Although I've never advised crushing powder to get a finer "F" that still might be an option if that's all you have. I would certainly try it first as I-F, you just never know.
A

Thanks guys! How many grains of 4f and 1f do you recommend to start?

AndyTheHombre said:
Thanks guys! How many grains of 4f and 1f do you recommend to start?
Click to expand...

I'd try the 1f without the kicker first personally. If I had to use 4f I think I'd stay at 5 grs 10 at absolute most. If everything is good and the lock sparks good it should really light 1f in the pan..... This is provided it's not a sub of course. For 1 f in a .50 I'd start at 70 grs and see how things went from there.
A

Thanks for all your help. I’m going out shooting with it tomorrow. I’ll try the 1f with and without the 4f kicker and let you know how it goes.
R

It will give low velocity.

I have tested the booster charge idea. It made no difference.​ 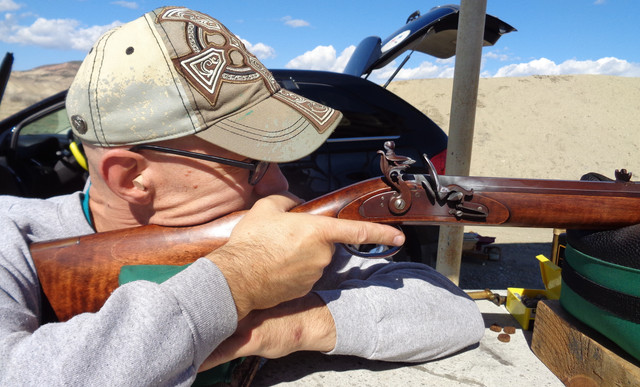 I shot a Carson copy Hawken I made with a Hopkins and Hobbs .54 barrel with 100 grains of OE 1F. 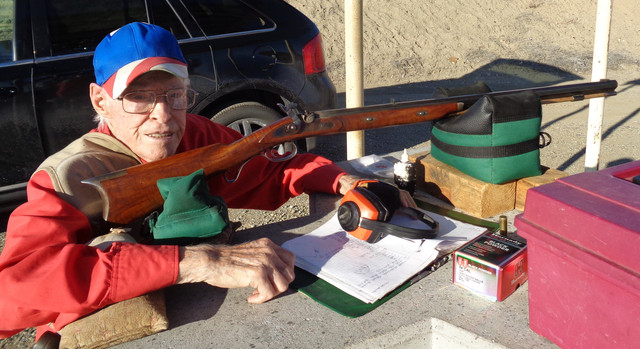 Tried the .015 CVA patch, which blew. Went to a heavier patch which also blew. Added a wool over-powder wad and all went well. The bottom two velocities on Target 1 are what it actually went. Then on Target 2, I tried a 10-grain booster of Goex 2F, but that made no difference in velocity. I have no explanation why this rifle produced higher velocities than my Bridger one, above. It might be my chronograph- I wore it out and sent it back to Oehler five times over the years. This OE 1F wants to shoot them all into one fat hole. 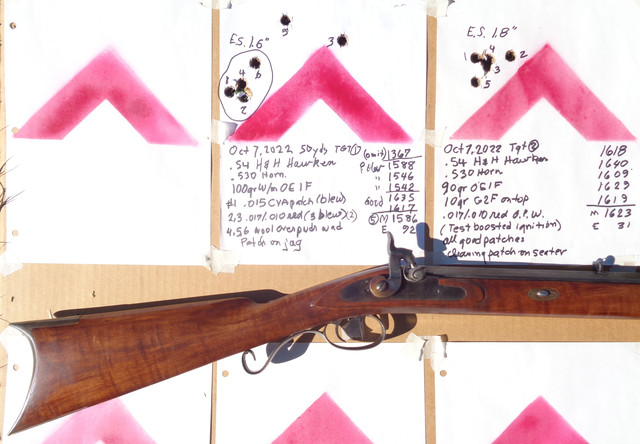 Is your rifle an import? If it is, then the breech is probably chambered, and 1F may bridge over the opening of the chambered breech if you aren't careful about cleaning it, or if you are shooting a lot in one sitting. A kicker charge of 4F may not be a bad idea just to make sure you have powder on the inside of the breech next to the touch hole.

I think you will be fine. I would try it first with just 1f in the barrel and prime with 4f. If reluctant to ignite then maybe 3-5 grains of 4f down the barrel first and tap the side of the gun to settle it in the breech before adding the main charge.