The Illinois fall turkey season started Saturday. I bowhunt in the morning and hunt turkeys in the afternoon with my flintlock 12 ga. I made.

I eased into the woods about 3:00 and soon walked into what looked like several flocks of turkeys coming together. I got behind a big tree and waited for them to come my way. I had turkeys all around me for 2 hours before I had them in range. A big gobbler walked by, but I passed on him, as I wanted to save him for the spring season. The big ones are tough anyway. One of the many dozens of nice hens came close and the flinter went off fast and accurately. 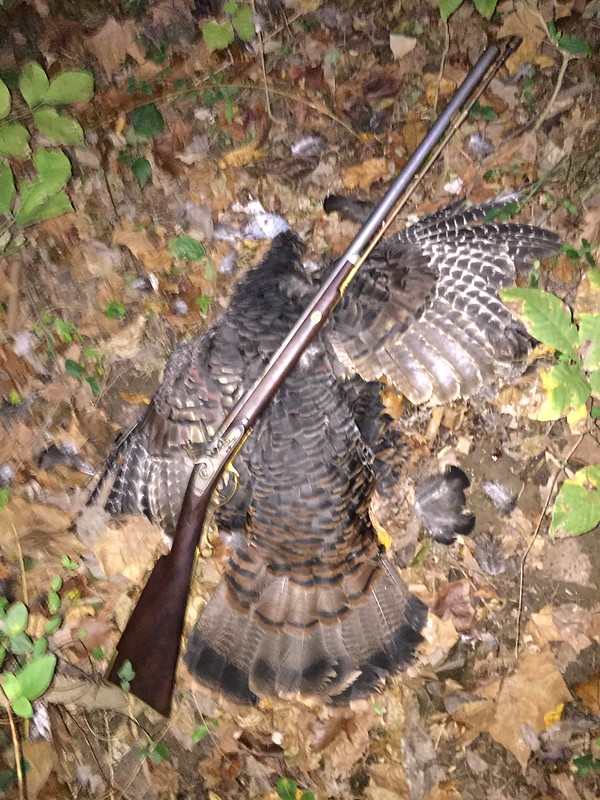 Excellent, and with your own gun! :bow:

Good job. Fall turkeys are tough to collect in my neck of the woods, can't imagine a flock like that on my hunting ground.

You are correct about those hens being so much better eating that a tough old gobbler. Congratulations!

Well done! It would be a very cool experience to get right in the middle of a group like that.

Don't see a lot of half-stock fowling pieces like that. I like the looks of them.
R

:bow: Congratulations okawbow, well done. Nice job on the gun you made too. Keep yer powder dry......robin
Last edited by a moderator: Oct 27, 2018

Thanks, everyone.
I'm lucky to have a great place to hunt both turkeys and deer.
I also had 2 close shots at turkeys with the longbow. The first arrow killed a sapling, and the second couldn't catch up with the moving bird.

I had success with calling in small flocks of turkeys last weekend. Lost yelps and putt purrs brought in birds, but they were always looking for something, and I don't usually wear camo, so they spotted me most of the time.

My 12 gauge is made around a modern single barrel breechloader barrel, 30" long. It only weighs 5# and is a great turkey gun. I've taken a fall bird every year for 4 years, and a spring bird 2 of 3 years with it. My load is 80 gr. 2f, 2 hard overpowder wads, a 90 gr measure of #6 shot, and another lubed overpowder wad over the shot.

Snow on the Roof

Outstanding Chuck! I need to take a few lessons from you to try on these Merriam's we have out here.

Some day I'm gonna do that!
:thumbsup: :hatsoff:
W