Take it you never hunted Antelope or Mule deer then.

All through this topic I've been thinking about and intending to post something, but hanshi did it for me.

hanshi said:
It may be just my opinion but energy from a muzzleloader doesn't kill, it only does lethal damage to internal organs. There are two situations in which a ball (usually) will not exit. If the shot is pretty close, say maybe 50 yards or less, the velocity is still high enough that the ball turns into a pancake; a pancake makes a lousy projectile. A long shot on a deer at a distance, or a low velocity ball, will often not exit. It has nothing to do with energy! If you stabbed a deer in the vitals with a Bowie knife or shot it with a razor sharp arrow it will still kill the deer. But they would also have pellet rifle energy and likely much less. Energy doesn't kill, it the damage to the organs that kills. Forget so called "wasted energy" myth; if it kills the deer why was the energy "wasted"?

To me it's irrelevant whether or not the ball exits or stays put. The most massive (and gory) blood trail was a buck I shot with my .45. It ran a few yards and crashed loudly. The ball didn't exit and there were plenty of corpuscles lost in the few yards it ran. I've killed very few deer from 75 yds to 100 yds and beyond. Results were a mixture of exits and no exists. Try not to compare 17th century technology with 21st century technology; it's like comparing apples with bananas.
Click to expand...

appalichian hunter said:
Take it you never hunted Antelope or Mule deer then.
Click to expand...

100 TO 120 yards is not a long shot for most riflemen (using a un-mentionable) and in some cases to far a shot using a old school muzzleloader for most hunters.

Where I hunt elk and mule deer 100 yards is close. You would need to be invisible to get closer. That's why I use conicals. The damage between round ball and a heavy conical is pretty dramatic. I know round balls work, hundreds of years of proof. Conicals give me insurance. I need all the help I can get!

appalichian hunter said:
Take it you never hunted Antelope or Mule deer then.
Click to expand...

Yes, some game is very distant. Simple answer is ,let it go.
W

Location
Living in the Past

Born in S Sask, seen oodles of antelope, ate plenty and never shot one. Season coincides with goose/duck and as such have had them around me lots. Cousins shoot them with bows and muzzleloaders all the time.
Same with mule deer, and I have taken lots of these with bow and muzzleloader.
Neither is hard to collect at close range if you know how to hunt them.
Walk
4

There are lots of different trains of thought about this and with my experiences I will get back to it when I have time. However I like two holes for a better blood trail. Even done better by far with heavy arrows that never stopped in a deer.

In my old hunting grounds about the only way one can get a 100 yard or greater shot is to be in a field. Otherwise in the brush with whitetails on the menu we're talking about 25 or 30 yards which is about the farthest that a hunter can see. I've killed 2 or three way out there only because my "stand" was in the middle of a field. I also had the advantage of using hay bales for a rest.

The shot was taken in old hardwoods. All the trees are 70+ years old and kinda sparse looking after the leaves had completely fallen off. It was one of the longest shots I’ve ever taken out there. Definitely the longest I’ve ever taken with a traditional percussion rifle. I had taken a few that far, or slightly farther with a Lee Enfield, ( if I’m allowed to mention that?), but never with something like this. Like I said I wouldn’t usually have taken the shot, but the buck was standing still long enough for me to use the arm rest of my ladder stand, and had presented himself with a perfect broadside. I felt comfortable enough to take it that day.

tenngun said:
No matter how fast you drive a round ball at the muzzle it goes subsonic by a hundred yards. The faster you drive it the worse it looses velocity.
That said we know of kills at one hundred and fifty or two hundred yards with ball.
Exit wounds don’t hurt deer. It’s the damage tween the ribs that counts.
My rule, and I ain’t preaching to any one who does it different, is ml is archery on steroids. Get close.
It’s not the frontier of 1840. You don’t go home to an empty belly or bowl of grits if you don’t get your kill. Get close,get kills,enjoy your venison
Click to expand...

But sometimes I do want the bowl of grits - with an egg and sausage on the top... 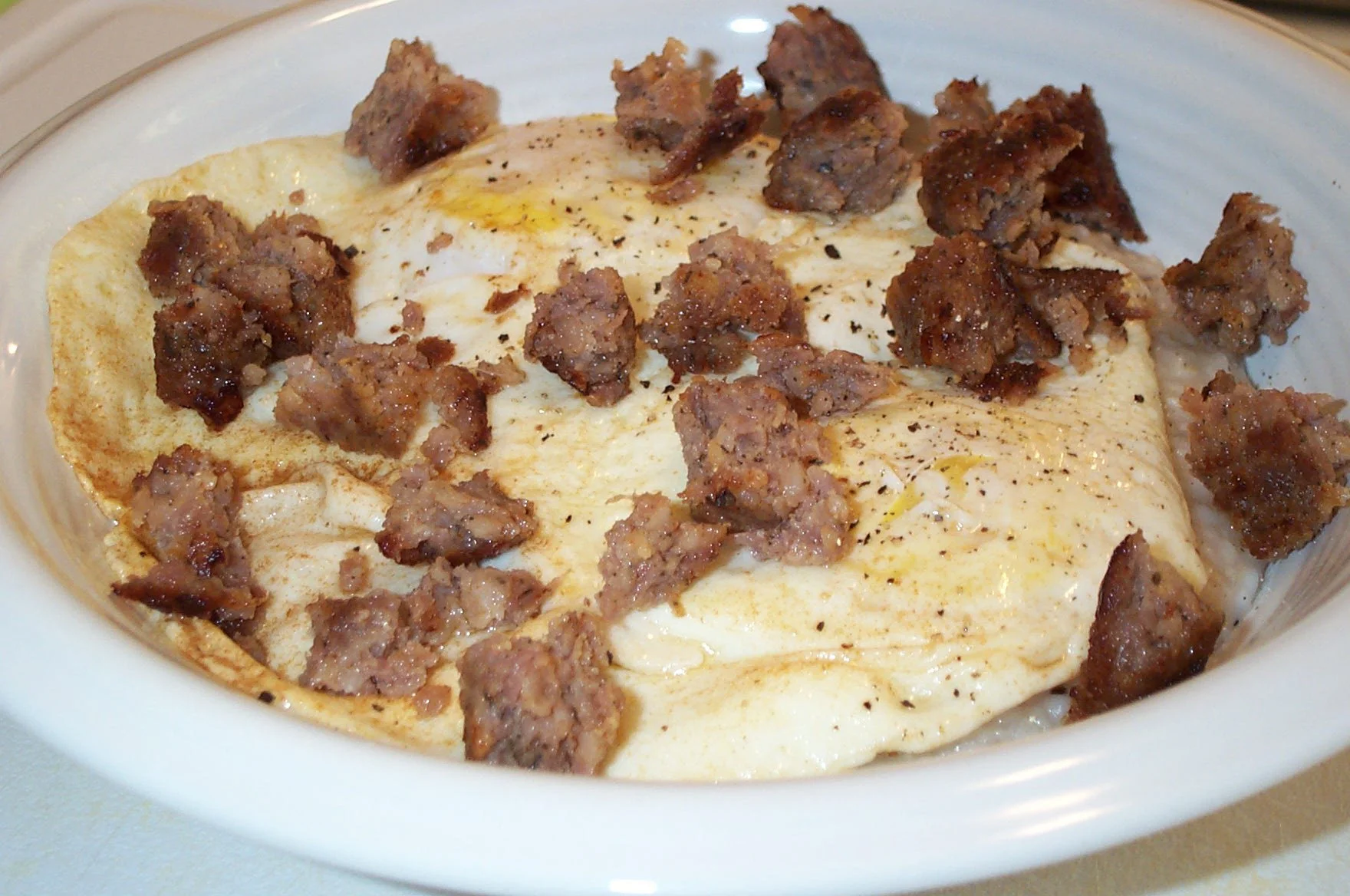 Nameless Hunter said:
But sometimes I do want the bowl of grits - with an egg and sausage on the top...
View attachment 178184
Click to expand...

Well I love grits, sos I understand
It’s real good as a side fish with a bowl of venison stew
4

Eterry said:
I was given 4 five gallon buckets of WW years ago, I've been mixing WW and soft lead 50/50 starting then, but only in round ball for smoothbore and rifle. Never in a conical, minie or a revolver ball.

I've heard the arguments of shooting a rifle "slick". I don't belive an alloyed ball will do it in a modern Barrel my lifetime.
Click to expand...

Not the ball but the cloth patch that makes the smoothness.

45man said:
Not the ball but the cloth patch that makes the smoothness.
Click to expand...

I have to inject a little about my findings with modern and BP together. I have never recovered a ball from a deer even with large bone and even the spine hit. I find it is a balance of weight of the projectile and the velocity. I have found too fast can lead to a failure to recover such as my 45-70 revolver and a 317 gr bullet. The velocity is 1633 fps and the bullet does not slow inside an animal at all so there is no energy transmitted, just a .45 hole all the way through. No blood for 100 yds and a long tracking job. I then found a problem with the .500 JRH and a 440 gr bullet that the bullet weight also pokes a hole without energy transfer. I found the .44 mag and the .45 Colt are much better and the lighter bullet for the .475 at the same velocity as the .500 will drop every single deer at once.
Now I have never had any deer take a step after hit with my .54 Hawken and a RB. Internal damage is the same as my modern guns. the 50 cal and .45 also do well with deer going only a short distance and I have taken about 160 deer with a .45 flintlock, never a lost deer.
My conclusion is that velocity is not the answer in many cases and the ball or bullet slowing in passage is the most important to give enough energy no matter if the lead goes all the way through.
Here is an example of enough energy with two holes.

I was told by a famous barrel maker in Ohio, name of Bill Large, that the cloth is what polishes the bore. Accuracy is poor with too much polish so old timers filled the bore with urine overnight to etch the metal.. I have had friends with chrome lined muzzle loaders fail to find anything to shoot. There must be grip on the ball.
Now this is different then smoothing out tool marks that can cut a patch. You want that but never a high polish.
I have used vinegar and Scotch Brite to bring back a barrel.

I wouldn't say "failed". Depending on where you live that might be the only option for you. Or, you may be on a learning curve. Don't quit.

Voice of experience. Worth heeding. I haven't taken near as many. But, mine also with a .45 flinter. All, after what I call 'reaction leaps' went down and plowed dirt with their noses.
B

Rifleman1776 said:
I wouldn't say "failed". Depending on where you live that might be the only option for you. Or, you may be on a learning curve. Don't quit.
Click to expand...

After 62 yrs of deer hunting I just can’t seem to quit….
N

Eterry said:
As the old owner of a large modern bullet company used to say when fielding complaints " where exactly in the deer's death did my bullet fail you" lol.
Something to consider.
Click to expand...

There are no guarantees in hunting. Sometimes you get an exit, sometimes you don't. And sometimes for unexplainable reasons. If you were able to track the animal and recover the meat...........'where did the bullet/ball/shot fail you'?

Picture of recovered 54 cal. Round ball and patch from my first Flintlock doe
2

Thursday at 6:03 PM
bushytail
B