I read a book by Charles Hanson and he mentions the English common musket. Is that just another name for a Brown Bess or was it a different gun?
R

He probably meant the Trade musket rather than any Govt pattern , Rudyard

I would agree with Rudyard. Charles Hanson was an expert on Indian trade guns and trade rifles. I haven't read everything he wrote, but I'm not aware of him writing much about military arms.

Below is a scan from De Witt Bailey's British Board of Ordnance Small Arms Contractors 1689 - 1840. 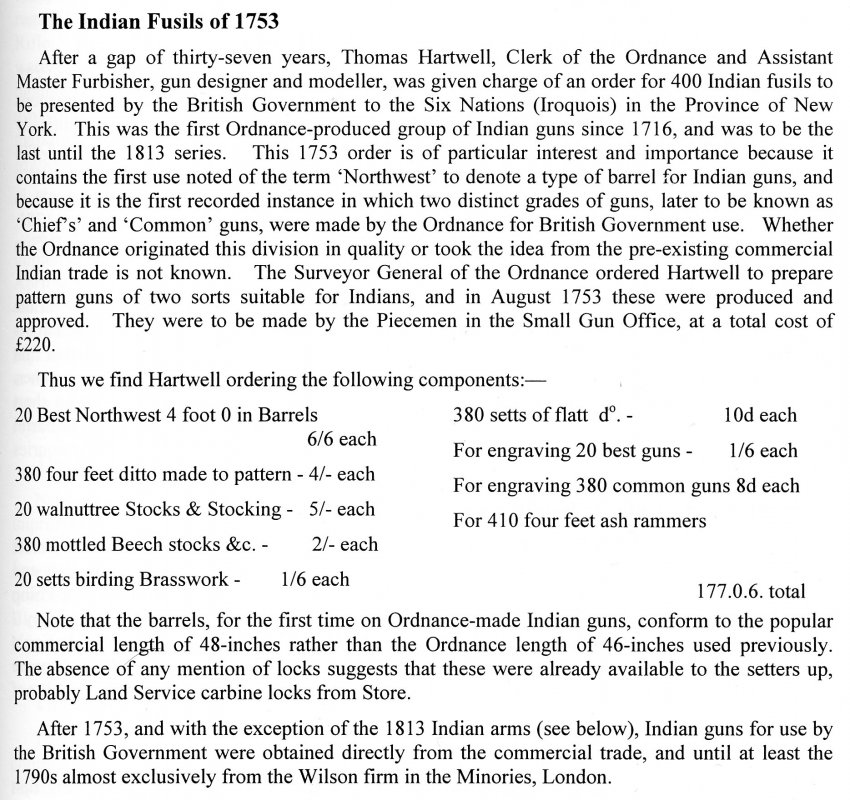 Note that Bailey points out that this is the first documented use of the term "Northwest" in conjunction with Indian guns.

The earliest surviving Northwest trade gun has the date "51" on the tail of the lock for 1751. S. James Gooding (Trade Guns of the Hudson's Bay Company 1670-1970, 2003, pg 72) believes the classic Northwest trade gun serpent sideplate was first ordered on guns in 1749 for delivery in 1750. The "common" guns ordered by the British government in 1753 could well have been Northwest trade guns.

James Hanson in Firearms of the Fur Trade, page 209, references documents showing British officials using the term "common" in orders for guns for the Indians in the 1790's and in 1809. Again, these would have been Northwest trade guns. The British government also used the term in the contracts it entered into with 16 British firms in 1813 to make guns, pistols, and rifles for its Indian allies during the War of 1812. The "common" guns in the 1813 contracts were all Northwest trade guns.

EN said:
I read a book by Charles Hanson and he mentions the English common musket.
Click to expand...

Can you identify the book for us and possibly quote the passage where Hanson mentions the English common musket? We might be able to figure out what he was writing about based on the context in which he used the term.

Can you identify the book for us and possibly quote the passage where Hanson mentions the English common musket? We might be able to figure out what he was writing about based on the context in which he used the term.
Click to expand...

Yes, the book is "The Northwest Gun" and on page 12 it states " The Hudson's Bay Company traded guns on a large scale from its beginning. The minutes of one Company meeting in the early 1670's lists 170 fowling pieces together with powder and shot as items in an outgoing ships cargo." The next paragraph says, " It should be remembered that there was at that time little difference between the plain colonial fowling piece and the common musket". Also they mention the "All purpose musket". Art they the same?

I errored in adding "English" to the term "common musket" But the "All purpose musket sounds intriguing.

cynthialee said:
I am pretty sure in this context it is referring to a smooth bore long gun of basic design and components
Click to expand...

EN said:
I read a book by Charles Hanson and he mentions the English common musket. Is that just another name for a Brown Bess or was it a different gun?
Click to expand...

I believe it to be a term that is in reference to any of the military contract smoothbores then in use that tended to be .69 to .80 caliber. And generally capable of taking a bayonet.

I guess with the ability to fit a bayonet shoot shot and or ball it was pretty all purpose.

Thanks, EN, I now understand the context.

Hanson was comparing the fowling pieces the Hudson Bay Co. was trading to the Indians in the late 1600s to the military musket of the day. The "common musket" he referred to was a military musket, but not the Brown Bess. The Brown Bess had not been developed and adopted until later in the early part of the 18th century.

In the next sentence after the one you quoted, he continues the comparison, "Even in Queen Anne's time [1702-1714] the colonial fusil was but a full-stocked musket of lighter caliber than the regular military piece."

Hanson published The Northwest Gun in 1955. It was a pioneering effort in the study of Indian trade guns. There wasn't a lot known about the early trade guns and Hanson was making educated guesses and speculating on what the trade guns of the later part of the 17th century and first half of the 18th century looked like. There was very little archeological information prior to 1955 and no recognized surviving samples of these early trade guns. He was guessing that they looked similar to known samples of 17th century and early 18th century English military muskets. He was trying to make the case that the Northwest trade gun was developed from English military muskets.

It turns out he was pretty much right about the mid- to late-17th century trade guns. But not so lucky concerning the trade guns of the first half of the 18th century and about how the Northwest trade gun came to be. It wasn't until the next decade that T. M. Hamilton had studied extensive archeological artifacts from public and private collections and categorized them into Types, that Hamilton and other collectors began to realize that Hamilton's Type G trade gun was the most prevalent trade gun pattern in much of the first half of the 18th century and was the precursor to the Northwest trade gun.

The trade guns of the 18th century, with the exception of the Northwest gun, were simply less expensive English fowling pieces. The fowling pieces themselves had adopted characteristics of the military muskets such as the "hand-rail" wrist and butt stock, but they were slimmer and lighter with smaller bores than the military muskets of the period.

The Hudson Bay Co. developed the classic Northwest trade gun over a period of a few years in the middle of the 18th century including the large bow trigger guard and the particular cast dragon sideplate. It continued the flat sheet brass butt plate, ribbed ramrod thimbles, and tang screw coming up from below from the Type G and even earlier guns such as the Club Butt.

The way to view it now is that the English military musket influenced the English fowler which in its most basic and inexpensive form was traded to the Indians. The Northwest gun was a specialized trade gun developed by the HBC that had no civilian or military counterpart. It came from the minds and hands of the View Masters that worked for the HBC and evolved from trade guns that came before it.

Thanks for the info Phil. I gather that, like the Hawken Rifle, the Trade gun met the particular needs of the Indians and others of that area. Does anyone have a good picture of a type G trade gun?
F

And it is light, well under 6 pounds