Eight hours on the hoof!

Well that's not strictly true.
I did sit down once! 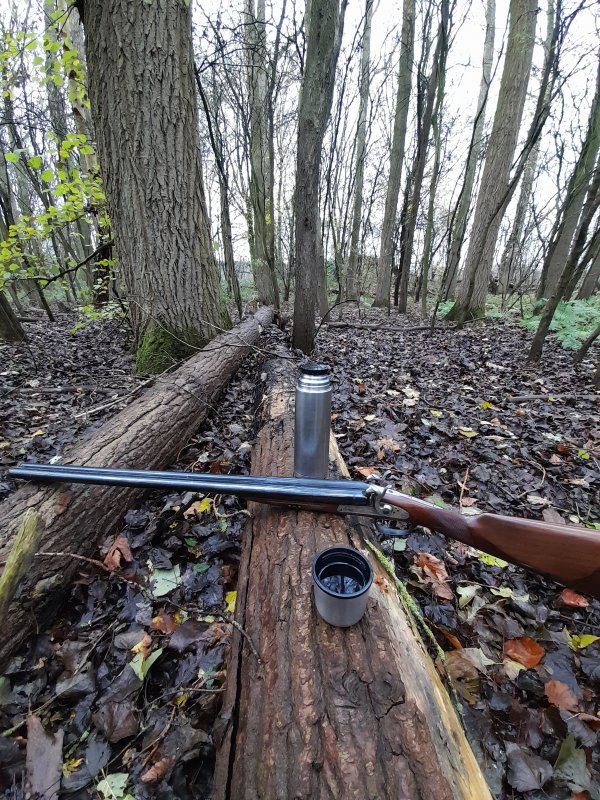 I was out still dark at 6:30 am to get to a wood and the wind the right way so I could try and call a fox in. Big Ted's left tube had 2oz of large shot in it and the right barrel had something like 1&3/8 oz of #5.
The fox never came so I set of for a woodcock.
There are more this year compared to last but it was a good while before I sprung one but it was no shot, I was all twisted up and it flew behind large trees.
Eventually I flushed another. It was close and I only had a narrow window to shoot. It is surprising how that large shotgun can get on target and out of the side of the smoke I witnessed the bird fall in the brambles. 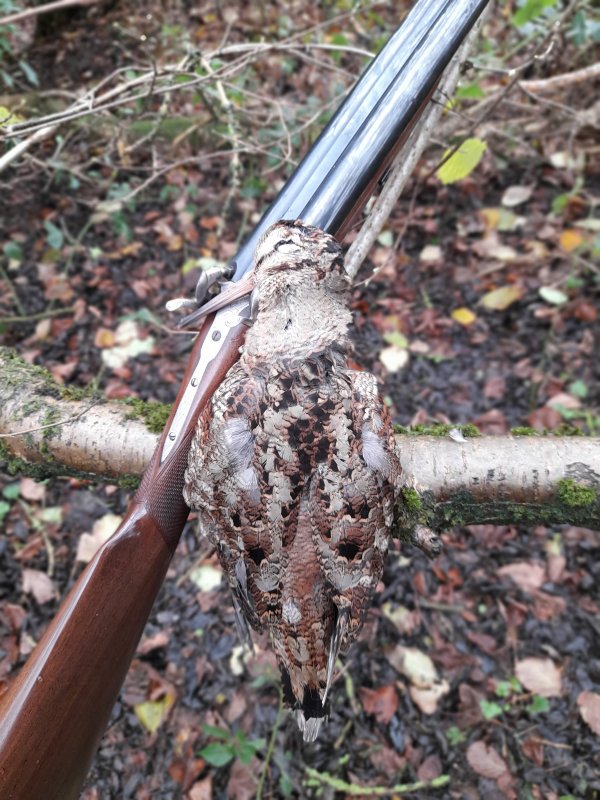 After that I failed to flush another but from dawn to that one I had, I had seven woodcock!
Jess had been patient and it was obvious she wanted to hunt so nearing a wood that holds pheasant I let her go. 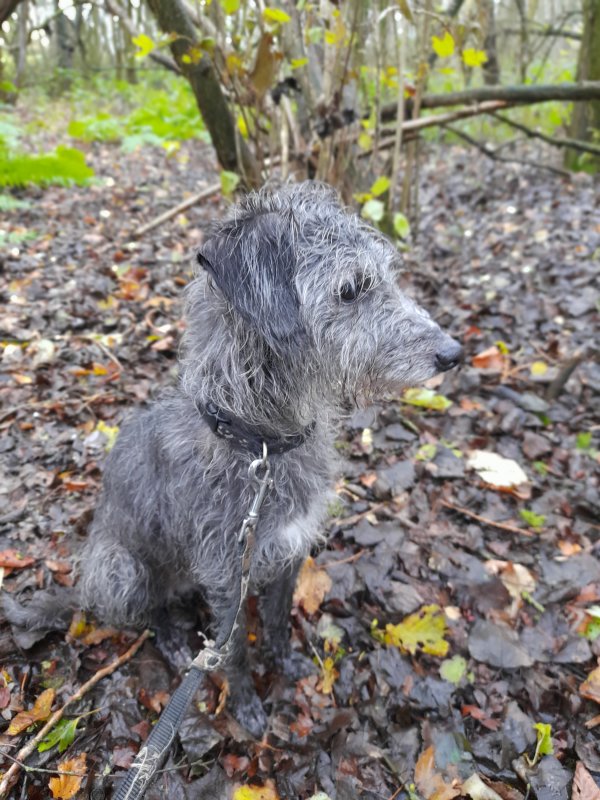 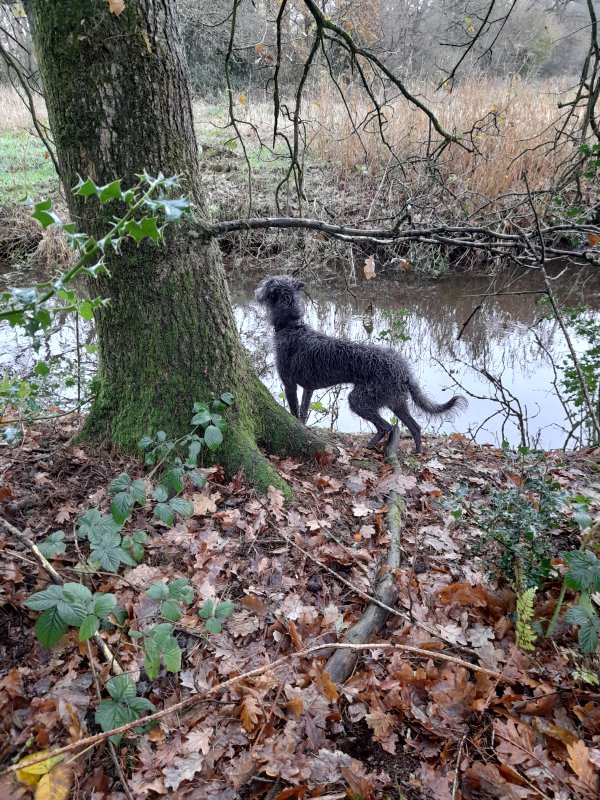 She was more interested in the squirrels but while she was hunting them, hen pheasants were flying out of this small wood in all directions. I generally leave the hens but there was so many I took a sporting bird. 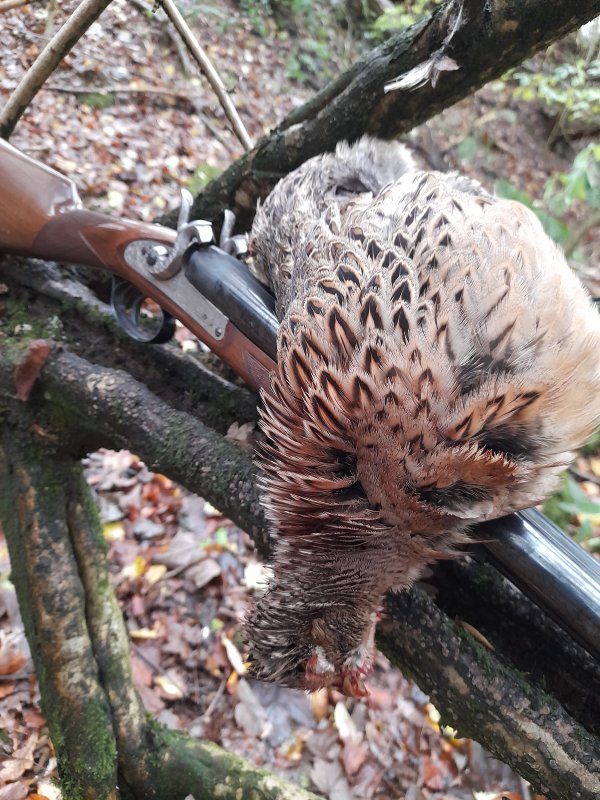 I was about to turn for home what with my foot hurting and my belly rumbling ( its now nearly 2pm) when a cock pheasant erupts from the cover and gives me a sporting shot but Ted didn't fire! I've noticed the left hammer needs bending very slightly. I shall have to give that some thought.
Alas, when that buckshot loaded barrel did go off it was not very surprising that the surprise of the day, a going away French partridge did not fold up!
I was done, tired, in pain and hungry so I set for home. But wait! I have to cross two more hotshots for pheadant and woodcock!
So, I loaded Ted again and I was glad I did! I sprung a small group of hens and three cock birds. An easy shot, I missed with the first barrel on a cockbird but connected with the second barrel.
It was a bit of a retrieve but I got it in the end. 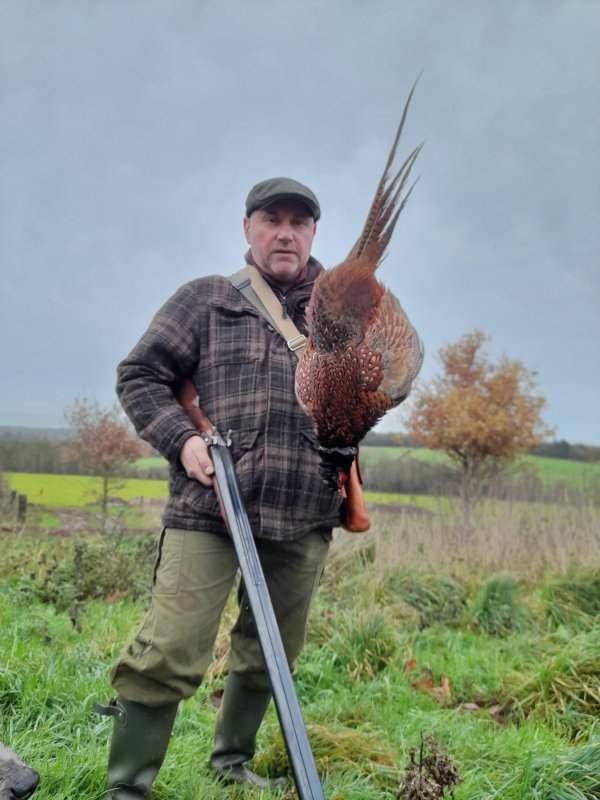 I loaded up again for the final slang of timber.
Jess lifted another but I clean missed!
Then she lifted another cock bird, it flew lovely, left to right, nice speed, I pushed through the barrels and fired. The bird crumpled and plummeted to the ground.
What a high note to end on. I was thrilled. 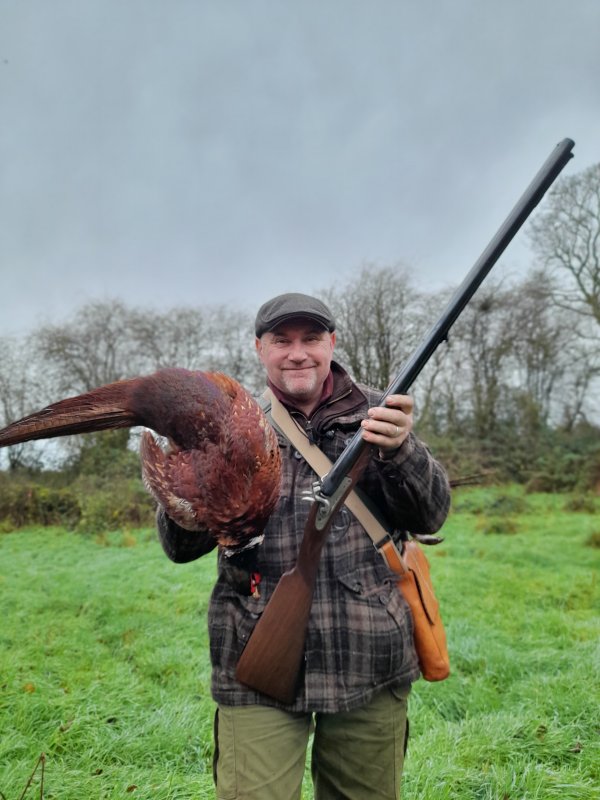 Gamebag full and feeling very very heavy I set for home. I had about one mile to the car. 3pm when I got the car and I could feel it.
Jess got a rinse and food, the gun can wait I'm getting a bath!

You had a great hunt.

Heck yeah! Looks like you had a great time.

At least you made time for a cuppa.

Now thats a good day. But i gotta ask, how do you get the hammers cocked so quickly on flying birds? I dont even attempt to shoot at wild flushed birds.
O

What a great adventure story! Good shooting! And, I have to say it..... love your little hunting partner!

Err no, sadly not

3Setters said:
Now thats a good day. But i gotta ask, how do you get the hammers cocked so quickly on flying birds? I dont even attempt to shoot at wild flushed birds.
Click to expand...

I cock the hammers when I get a feel something might flush.
Often they are down mind and many a bird gets away. I hunt alone so therefore can keep the hammers cocked for extended periods if I think needed.
O

I'm a little too old to take my beloved SXS...10 ga. out and chase game , so I always like your posts. They help me remember the good times. Love your cool dog. oldwood

I say Brits, that gun looks long enough to require a steering axle under the barrels. Thanks for the post, nice bird.
B

Great read! Thanks for sharing.

Its proof of good wildlife management in that area. Hunters are the best conservationists.

oldwood said:
I'm a little too old to take my beloved SXS...10 ga. out and chase game , so I always like your posts. They help me remember the good times. Love your cool dog. oldwood

I am paying for it today oldwood!
My thoughts use to be " I can't wait until next time", but are now, " I wonder how much longer I can do this" !!

On a good note, I got the misaligned left hammer off this morning and hahumm, adjusted it a fraction.
Looks much better and should make for increased reliability.

Send these adventures to the hunting magazines, they are worthy!

I am paying for it today oldwood!
My thoughts use to be " I can't wait until next time", but are now, " I wonder how much longer I can do this" !!
Click to expand...