Hi All. I picked this up inexpensively at an auction online, list simply as a “Cap & Ball Replica”. Looks to be a 2nd Model Dragoon replica, but I’m certainly not an expert. I’d appreciate any info anyone else can share based on the markings. The hammer doesn’t hold cock or advance the cylinder so it will need a bit of work but looks to be a fun project. Thank you!

I don't see any manufacturer marks in the photos you supplied. Look on the underside of the barrel, on the frame under the front of the trigger guard, on the trigger guard and backstrap under the wood, and on the butt of the backstrap. It has both proof marks and a date code (XXIII/1967) which is not indicative of a "kit" gun but one that the manufacturer sold on the market as an assembled revolver. The load lever pivot screw is a replacement, looking at the head finish and the end of the screw shaft. The barrel address is not the same as a 20th Century Colt 2nd Gen (et al) and is one I have not seen before. If it has a DGG (sometimes in a circle, sometimes not), it is an Armi San Paolo [although I think that ASP produced only copies of the 1851 Navy, 1860 Army, and Remington "1858" (of which I have one, AH/1981)]. If it has ASM, S. Marco, or a stylized ASM as an equilateral triangle, it is an Armi San Marco.

To the best of my knowledge, only Uberti and ASM produced Dragoon revolvers during that time period. Uberti always used the "S"-type load lever latch, while ASM used the better horizontal "Navy"-type latch, which yours has. Historically, the horizontal latch only appeared on a very few original late production Colt 3rd Model Dragoons.

I am leaning toward it being an ASM.

More photos of the various areas I have pointed out would be helpful. At any rate, good luck with your quest!

sourdough said:
More photos of the various areas I have pointed out would be helpful. At any rate, good luck with your quest!
Click to expand...

Jim - Many thanks for taking time to write such a detailed summary! The loading lever didn’t want to release easily, so it will take a little finagling before I can get photos in that area. Once I have a chance to investigate more, I’ll post some photos of the areas you mentioned.

This relica of a Colt 1848 2nd Model Dragoon has Italian proof marks.
As Sourdough explained the only Italian makers of Dragoons were Armi san Marco (ASM) and Uberti.
To the best of my knowledge only ASM made them in the 1960s already whereas Uberti did not start manufacturing these models before sometime in the 1970s.
F.A.U.L. of Belgium allegedly made a few prototypes of Walkers and Dragoons during the early 1960s, too.
They would be an extremely lucky find and have the Belgian proof marks.
Long Johns Wolf

To pick up where Sourdough and Long Johns Wolf left off; this Dragoon replica was made by ASM in 1967, this according to the date markings on the side of the frame XXIII. I'm fairly certain it was made by ASM because they were thusly serial numbered on the frame bottom, trigger guard, barrel assembly and sometimes the grip frame bottom, like an original. Here's mine, also an ASM; 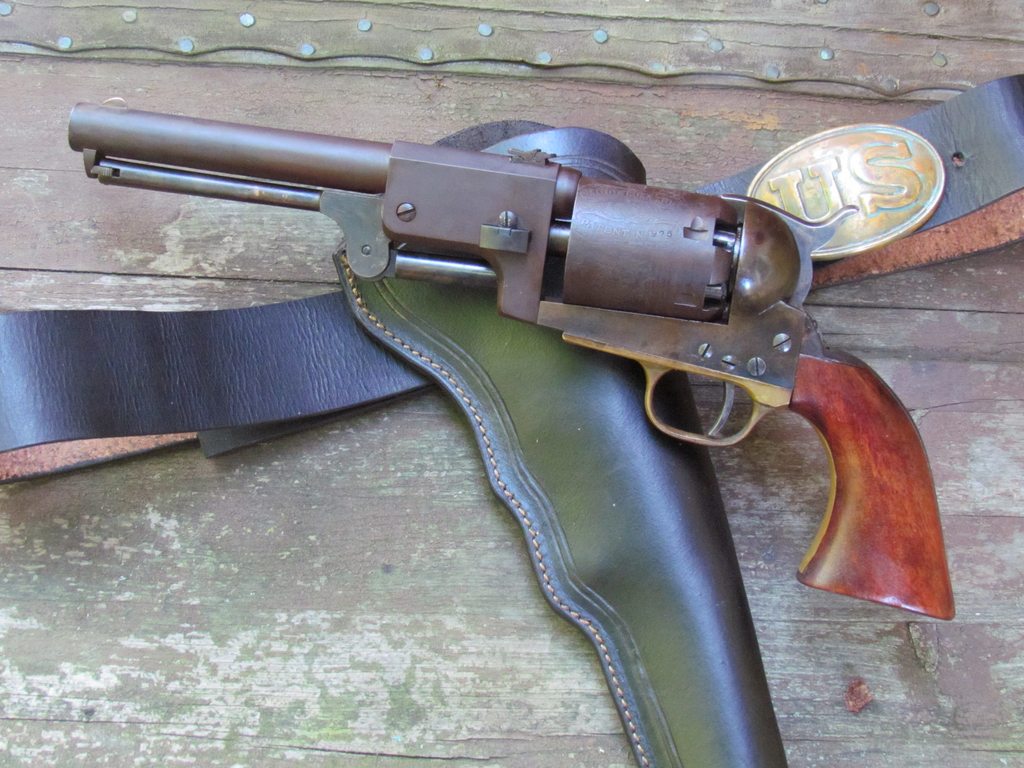 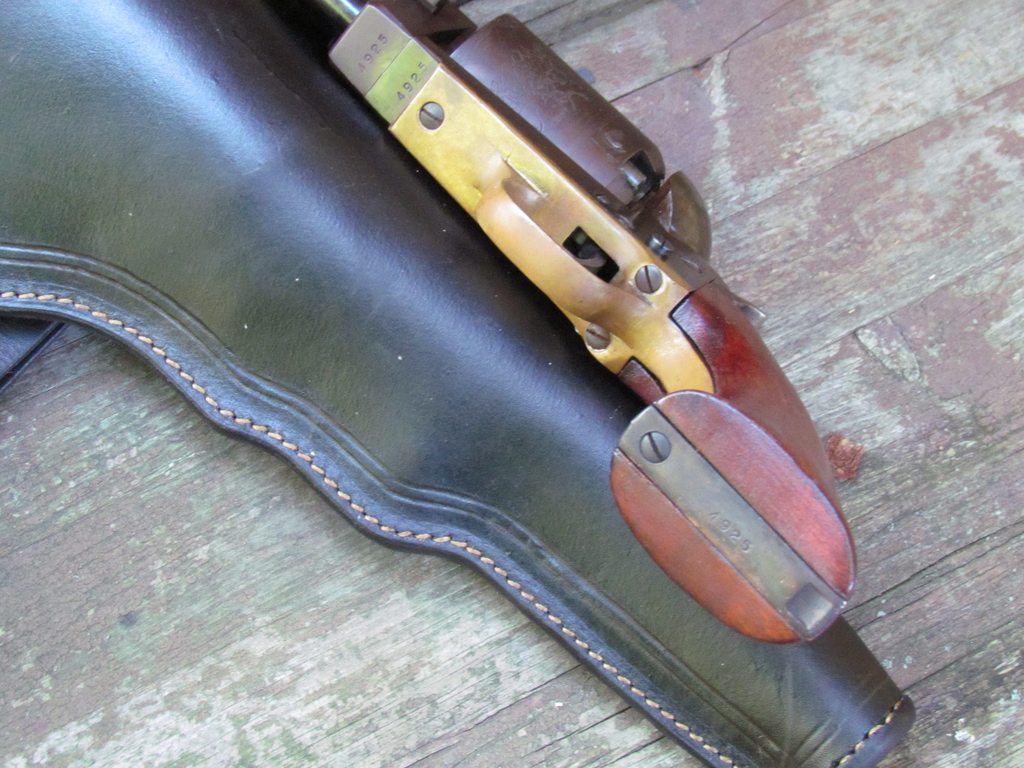 Long Johns Wolf said:
F.A.U.L. of Belgium allegedly made a few prototypes of Walkers and Dragoons during the early 1960s, too. They would be an extremely lucky find and have the Belgian proof marks.
Long Johns Wolf
Click to expand...

I know the OP's thread concerns an Italian Dragoon (and I don't want to hijack it), but your comment about about F.A.U.L. reminded me of Centennial Arms (Chicago IL) which was started by William B. Edwards (of Navy Arms fame with Val Forgett) and Sigmund Shore about 1960-1962. Centennial Arms revolvers imported Belgian revolvers manufactured in Liege, Belgium and did not have the Centaure logo on the front left side of the frame, nor Belgian proof marks (I think). The Centennial Arms 1860 was stamped "Centennial Trade Mark "1960 New Model Army" on the top of the barrel and stamped "Made In Belgium" on the butt of the back strap. Centennial Arms also imported/sold 3 variations of the Dragoon revolver. 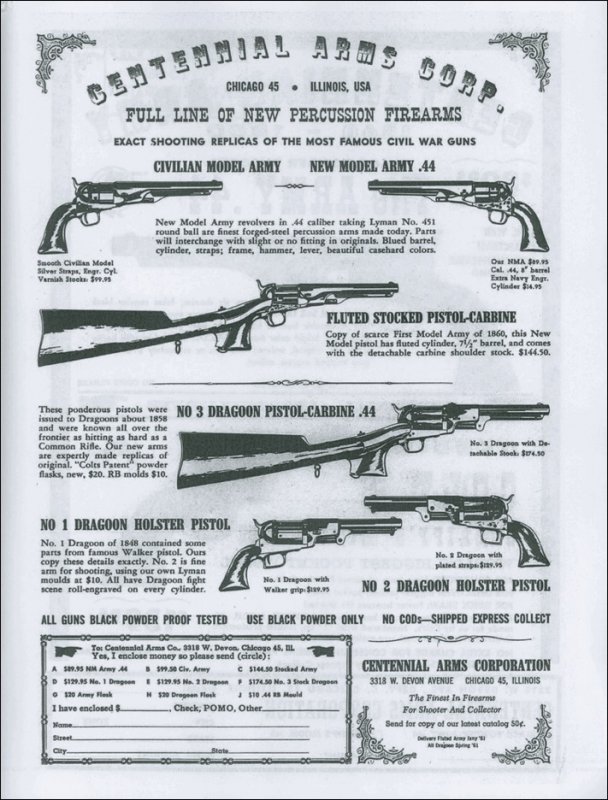 For those of you who are not familiar with Wolf, he lives in Germany and is an administrator of the FROCS (Friends Of The Centaure Society) and last year he and an associate updated the site. If you are interested in this area, it is a treasure trove. Wolf has also recreated some historically correct Confederate revolvers to include the Dance, Tucker & Sherrard, and Leech & Rigdon revolvers, among others. He has an excellent gunsmith at his disposal, and both take care not to create something that would be confused with an original, so as to satisfy the trepidations of collectors of originals.

Never disregard what Wolf posts as he is constantly seeking historical knowledge about his creations, and applies that to them.

Off my soapbox and I will concentrate on the OP's gun.

I’m always impressed by the amount of knowledge on this forum and appreciate everyone taking time to share it. It sounds like the evidence points towards an ASM. Interestingly I did take it apart and investigate further in the areas mentioned, but I couldn’t any additional identifying marks.

Since I have a folks much more familiar with these than myself present, if anyone has any suggestions on removing the barrel, feel free to share. I’ve added some oil and am letting soak, but it’s on there tightly for sure!

Colt's own instructions were, "set cylinder to halfway and use the rammer to press the barrel off the arbor" Or words to that effect.

Your first problem is to remove the wedge. Guido the Italian gorilla was employed by a few Italian manufacturers. If you have not done so, use a brass punch to drive the wedge to the left and remove it. Having accomplished that, you need to put the revolver on half cock so that the rammer interfaces with the cylinder face. Lower the load lever and use a plastic/rubber mallet on the load lever to move the barrel off of the frame. Believe me, it will move and you won't harm the load lever/rammer. Been there, done that. Clean and lube once that is done.

sourdough said:
Your first problem is to remove the wedge.
Click to expand...


Thanks Sourdough. The barrel removal problem came after this post, I just tacked on the question so the photos are misleading but I did remove the wedge before attempting. I did try whacking it with a leather mallet but was indeed concerned I’d damage the lever. I’m going to soak it oil a bit and then be more forceful since it sounds like I may have been a bit too cautious. Thanks!

This has been a great thread, fellows! Very positive, informative, and collegial.

Good comments, all around.