I hope this thread will be of use to those who need something to put their stuff on or in while encamped; perhaps not "period correct" or "historically correct," but sturdy and functional nonetheless and for the most part meeting Webster's definition of "crate." Please bear in mind that my particular period of interest is late percussion. 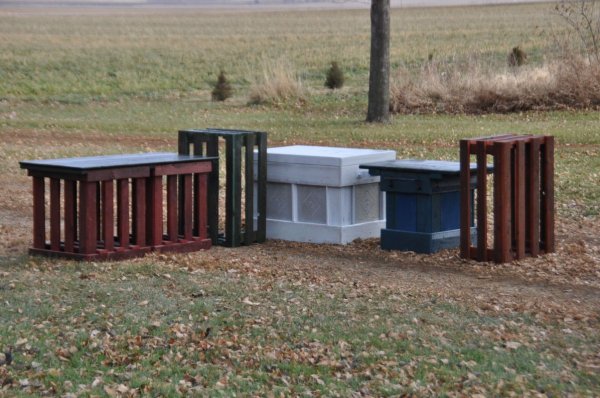 The following photos explain assembly of one of the two pieces at left.
I use hand tools as much as possible and find the large backsaw indispensable. Second most useful is the 1" socket firmer chisel, kept shaving-sharp; never struck but used as a "slick" for paring. The small hammer is plenty for box nailing and affords good control. The square and the rule are your best friends for this type of work, trust them without question and use them often. 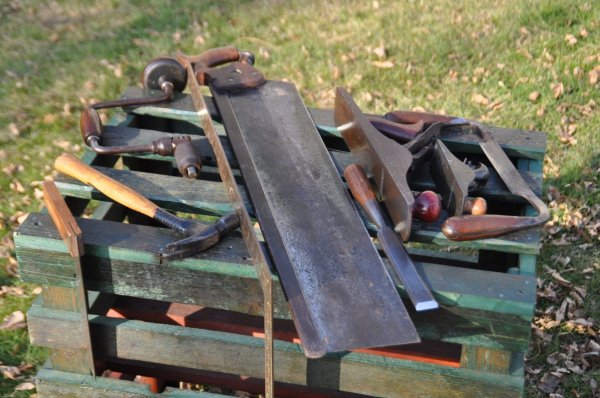 Modern four penny (4d) box nails were used in lieu of the oft-discussed "correct"cut nails. The originals here are from a small 1892 schoolhouse I disassembled which provided the wood used for the furniture shown. The structure came apart with ease and most boards simply tapped apart. It was my observation that the nails mostly acted as pins preventing lateral movement rather than providing the clamping force we expect with today's construction techniques. It is important to add that all of the sheathing, siding, and flooring of the structure was tongue-and-groove. 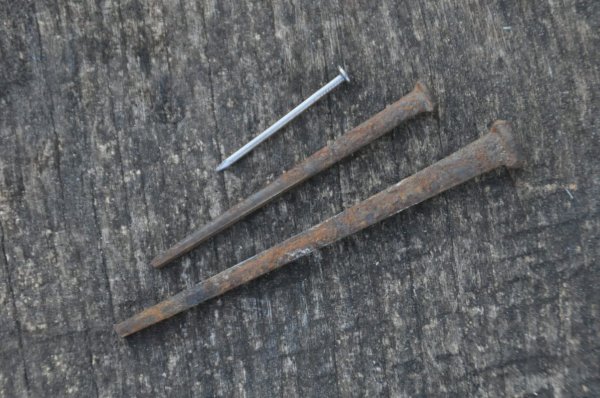 Much of the lumber was then utilized for sheep panels which required removing the tongues and grooves with a drawknife, yielding 5" width boards. The panels had been assembled with sheet rock screws, which again, were easily removed. 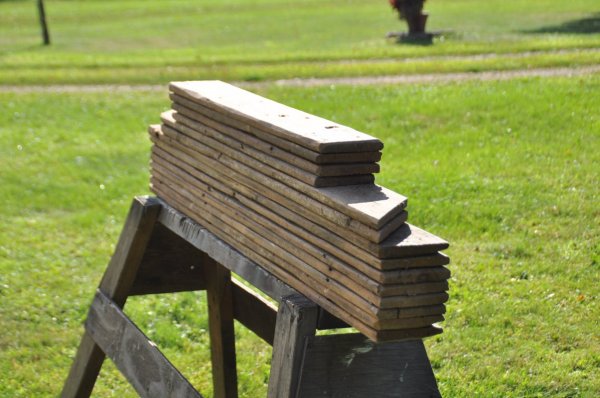 The boards were then ripped in half with a circular saw and four panels assembled, 18" wide, 20" in height. For each nail, a 5/64 hole was drilled in the board it was being driven through. Note the nails for assembly of the individual panels are started in their holes at this point. 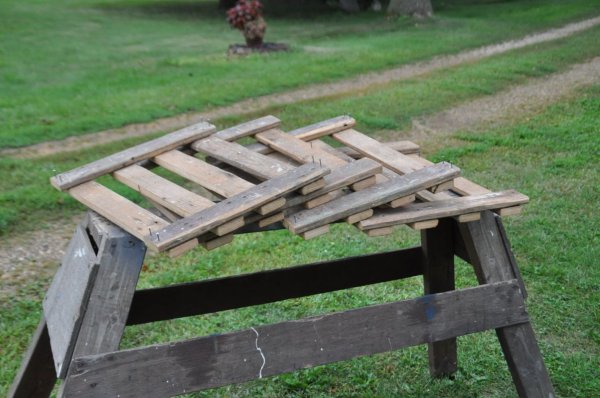 Nailing into end grain provides little clamping force; avoid it like the plague. No need to drive the nail head into the wood, as the fibers thus compressed only strive to push back. If your hammer blows mar the surface, you've gone too far. 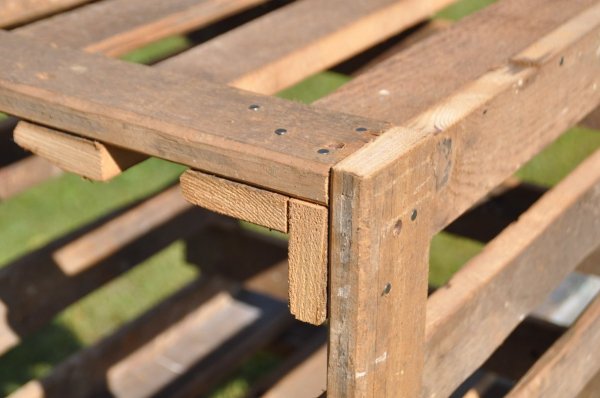 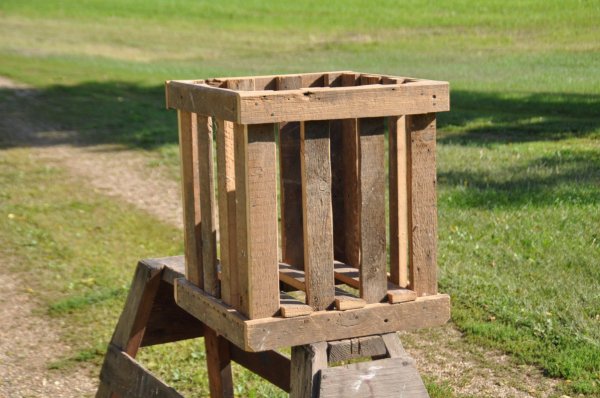 I very much look forward to any discussion on what I've presented here. For those interested in this subject, try searching "crates" (using quotation marks) on this forum. There is a wealth of information previously posted by those far more accomplished than myself...
G

I'd like to add a bit of background to the above post, if I may. Definitely not trying to sell any of the stuff pictured; the items are from my personal collection and I only wish to offer ideas for others who like to build their own gear. My interest in the late percussion period relates to Fort Ridgely, Minnesota Territory, opened in 1853. I'm fortunate to live within a stone's throw of it's ruins and have studied it's history for almost thirty years. It was supplied by both steamboat and overland routes, literally hundreds of tons annually and supported a large civilian workforce during it's life. Additionally, the then-frontier town of New Ulm was nearby to supply both soldier and civilian with goods. So, my interest in crates is not unfounded. Truly, much would have been different about the crates of the day; thinner material, wider boards, fewer nails, etc. I'll try to share other projects as time permits. Thanks, folks...
C

Interesting. And at least during the Civil War, there is ample evidence of soldiers using crates both as furniture and also breaking them down to make other items such as tables and stools. Granted, this would have been mainly during winter encampments when they were in one location for a time. Much of it was burned when they shifted back to active campaigning in the spring.

Very kind of you, Bill. For reference, the two standing on end in the first image are a specified hardtack crate size, 26"x 17"x 11".
C C6, every time I see the third image I'm reminded of the spec's for the crates requiring tongue-and-groove joints if two boards were used in making the same surface. Wonder if the fellow preferred to eat from the crate he rubbed his behind on or the one he smeared his boot on.
P

Nice job with the handtools Tramp. Ive been down that bottom road south of Franklin and Fairfax and down Hwy 4 also. Went into the park a couple times, it sure is interesting history there. And most beautiful area. Heck, never imagined somebody was making fine furniture there by Ridgley!!
C

I wonder what's in the box in the first picture, the one with the holes in it. A chicken ?

Or something that could mold, like root veggies?
G

C6, your first image is worth a thousand words. And raises as many questions. Three kids and a baby in the basket? The "ground" appears slightly reflective and a broom is visible between the soldier with saw and kneeling child; a groundcloth? The ventilated box is a uniform shade, indicating it was painted and the slack container beneath the woman's basket has a stick through it's handles as if to contain what's under the lid. Enamelware basin in tent between the soldier with saw and woman? Was he a butcher? The woman's sleeve is torn...and the kneeling child is smiling.
C

Gun Tramp said:
and the slack container beneath the woman's basket has a stick through it's handles as if to contain what's under the lid.
Click to expand...

I think that is a washing machine, with the agitator removed. note the cloth iron next to it. This woman could be a laundress. 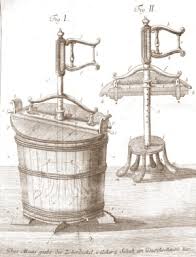 Very beautiful materials! I believe that there is no furniture of higher quality than pure wood.
E

EricHudson said:
Very beautiful materials! I believe that there is no furniture of higher quality than pure wood.
Click to expand...

Hi all. Is it just me, or are you creating decorations and furniture similar in style to the 19th century? That is something very new. I might even say that I am lucky to have stumbled upon this thread. I've always had this dream of living like our ancestors on any given day of the week. Using in all areas of life exclusively the technology of the time. It seems to me that you have a skill in making the best outdoor lounge chair that is so steeped in the spirit of not only the wild west, but the spirit of our entire history and country. I wish you the best of luck in your endeavors!
B

Your crates look great.
Saw this on facebook.
Idea for your next project.
Not sure where you store the cross boards though. 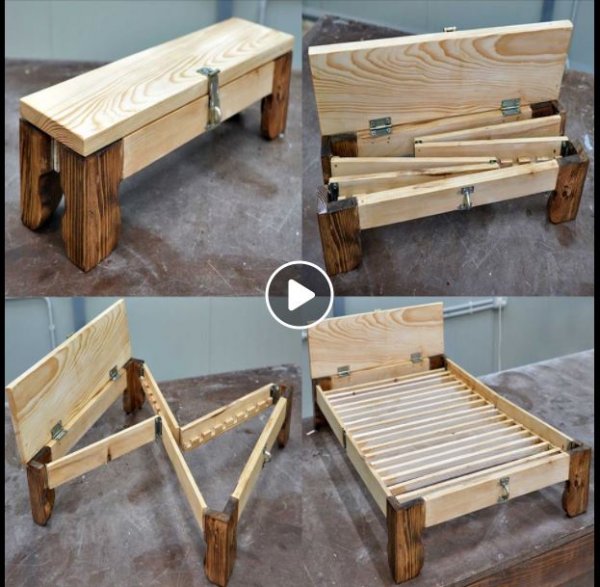