Correct Use of a Knapping Hammer

What is DGW?? The holy bible of black powder shooting. Google Dixie Gun Works or better yet order their catalog(five or ten bucks) . They sell everything to do with ML shooting plus have lots of great information.
K

If you don' t know, they are about the first company to sell muzzleloading guns and date back to the 1950's selling not only guns but everything else a person could want that duplicates the stuff that was sold in the 1800's and earlier.

They are a very reputable company but their prices are usually a bit higher than other companies offering the same stuff.

I do believe that it is Dixie Gun Works.

TOW = Track of the Wolf
https://www.trackofthewolf.com/Index.aspx

This tool works pretty well for me...it's from Larry Callahan 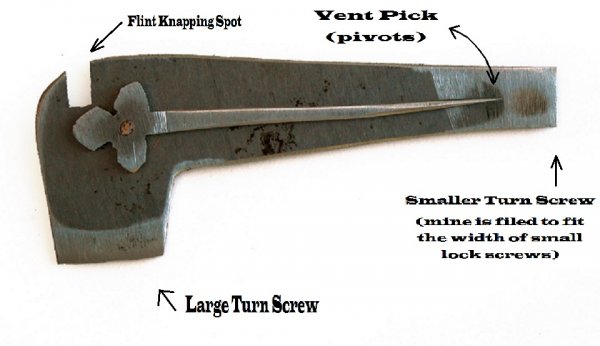 OK, I'm very familiar with Dixie Gun Works, just couldn't connect with the initials. Thanks for all the clarifications guys.

Juice Jaws said:
What is DGW?? The holy bible of black powder shooting. Google Dixie Gun Works or better yet order their catalog(five or ten bucks) . They sell everything to do with ML shooting plus have lots of great information.
Click to expand...

OldNo7 said:
Believing that there is "No such thing as a stupid question other than the one 'not' asked...", I'll put this question out there for replies, as I'm thinking the experiences and insights shared may be helpful to others too.

I am aware there are other tools to use too -- the edge of the frizzen, a brass rod, a steel nail with ground-down (smaller diameter) tip, or some type of copper pressure tool.
Click to expand...

I use the spine of my belt-knife. Just a few taps are needed to sharpen the edge and nothing special to carry.
C

Grenadier1758 said:
I've made similar tools using brass rod. I would be leery of using a hardened steel rod on a flint above the pan. I know you have used your tool for 30 years, but I would want to use something that couldn't make sparks. Leaving the steel soft is reasonable and I have noticed a couple of turn screws to flake off the edge of my flints.[/QUOTE After reading your post I thought of a cold chisel . I am a welder and have been in the metal industry since the early 80's. I researched cold chisel which I thought would create no sparks. Well I am very humbled but now I know different.
Click to expand...

Must mean Dixie Gun Works. There have been previous posts about using acronyms without earlier reference to what they refer to. It would be kind to use the whole name at least once.
4

I have flaked a lot of flint. A piece of deer antler, brass or a big iron nail works best. You want to let the flint dig into the tool and pull flakes off. I have watched guys at the shoots use a little hammer but they are soft and don't spark. They seem to work for them.
I like real flint for the guns, those cut rocks don't last at all and can't be sharpened. Flint does not spark, it needs to cut hard steel and the steel is the spark.
I used to hunt the PA season and two guys bought new guns made in Italy to drive from Michigan to PA to hunt. They would not fire so I looked at them. The frizzens were dead soft, nothing I could do. One expensive trip for nothing.
Some of you old timers might have heard of me in Ohio. I went hunting and my mainspring broke. I went to the store and bought rubber bands and tape. I hooked a bunch over the hammer and taped near the rear sight. I shot a deer and when I got back north I was asked if I was the guy shooting a zip gun? I made a new spring and then the frizzen spring broke so I made a new one. Tool steel, hardened and tempered, been working well over 50 years now. Some stuff today is not as good as what the old timers made. Buy a good lock since it is money well spent. Use real flint, it WILL break but you can sharpen it.