Can someone explain to me the choking of smoothbores? I understand what chokes are in modern unmentionables, but I’m not sure I quite understand jug choking, etc on fowling pieces. What’s the process & why?

Jug choking is where metal is removed a few inches inside the bore from the muzzle. The choke is a couple inches in length, tapered on both ends. The shot column enters the choke and widens slightly as it has less resistance then starts to tighten as it leaves the choke. The shot continues to tighten after it leaves the muzzle, improving the pattern.

Brittsmoothy, where are you when you're needed??

Brittsmoothy, where are you when you're needed??
Click to expand...

Are we talking about improving a pattern out to 30-40 or beyond? The reason I ask, I’m going to have a fowler built at some point. It’ll be a turkey gun for the most part. I’ve been around muzzleloaders since the time I was in diapers and have never heard of choked smoothbores until I joined this forum
M

Choke in muzzleloaders does the exact same thing as choke in cartridge guns. You could have a normal constricting choke in a muzzleloader, but now you would have to load wads through an undersized muzzle. Not the end of the world, but not as convenient. Plus you are basically rendering that gun shot-only, no round ball.

Jug choking could be used in cartridge guns, but usually isn't for the simple reason it offers no advantage there. Eterry described it pretty good, I'll post a picture below. It does the same thing as a normal choke, but the way it is in the gun allows a cylinder muzzle so loading is easy. Plus you can still shoot roundball effectively. It really is the cats meow. You could also have your gun threaded for choke tubes, which does allow you to use a cylinder tube for round ball, or you could even remove them to load, but it adds a whole lot of nonsense. They are a big enough pain in a modern gun, you don't want them on a muzzleloader.

You will hear differing opinions, but here is mine. You are going to want a decent amount of shot, and thus you will want at least a 20 gauge. 16, 12, or 10 gauge are great too. If you sit down and really work with a cylinder bore gun, you can get effective patterns to 25 yards, maybe even 30 yards if you really spend time. I was working with a cylinder bore 10 gauge, and I'd guess I put in close to 30 hours of pattern testing before I found a load I was happy with at 25 yards. Since you are working with shorter ranges, #7.5 is a really good shot size for turkeys in a cylinder bore. That pellet count really helps.

On the other extreme end is an extra full choke, a jug choked 12 gauge to be exact. I've worked with that gun on and off for years, and just about anything is pretty good. It's not hard at all to find effective load to 40 yards with these, and my own choice load is effective to 50 yards. I have no failures to report, but I would shy away from #7.5 past 35 yards. I shoot #5 in this gun, and plenty of it.

In the middle is my 10 gauge with normally constricted chokes, but only improved cylinder. You can hardly tell they are choked. Just this tiny .010" of constriction makes a huge difference. My pet load did not take too long to find, and is effective to 35 yards. I use # 6 in this.

My advice is that if you want choke, get it jug choked. If you don't intend on using it for any wingshooting, then don't be afraid to go right for extra-full. It's not that hard to find loads that pattern a little wider if you do find yourself wanting to bring it out for pheasant or something. The patterns you can achieve with these are astounding, better than I could ever do with a cartridge gun. There are shotshells that can match them, sure, but they are using special wads and buffers to do it. I'm seeing that kind of performance in muzzleoader with just paper wads and plain shot.
M

Jug choked is listed as "Tula" in this chart. 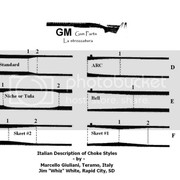 I have a book on English guns and it goes into details about the history of the choke. Muzzleloaders needed a choke that didn't interfere with loading, so the jug choke was created.
I have seen many modern Muzzleloader shotguns using modern barrels using chokes. They usually fold or bend the card wads to load, but fiber wads are out of the question.
I believe Caywood would jug choke a barrel, and others do as well. It's a trial and error sort of thing, it's really hard to put metal back in a barrel.