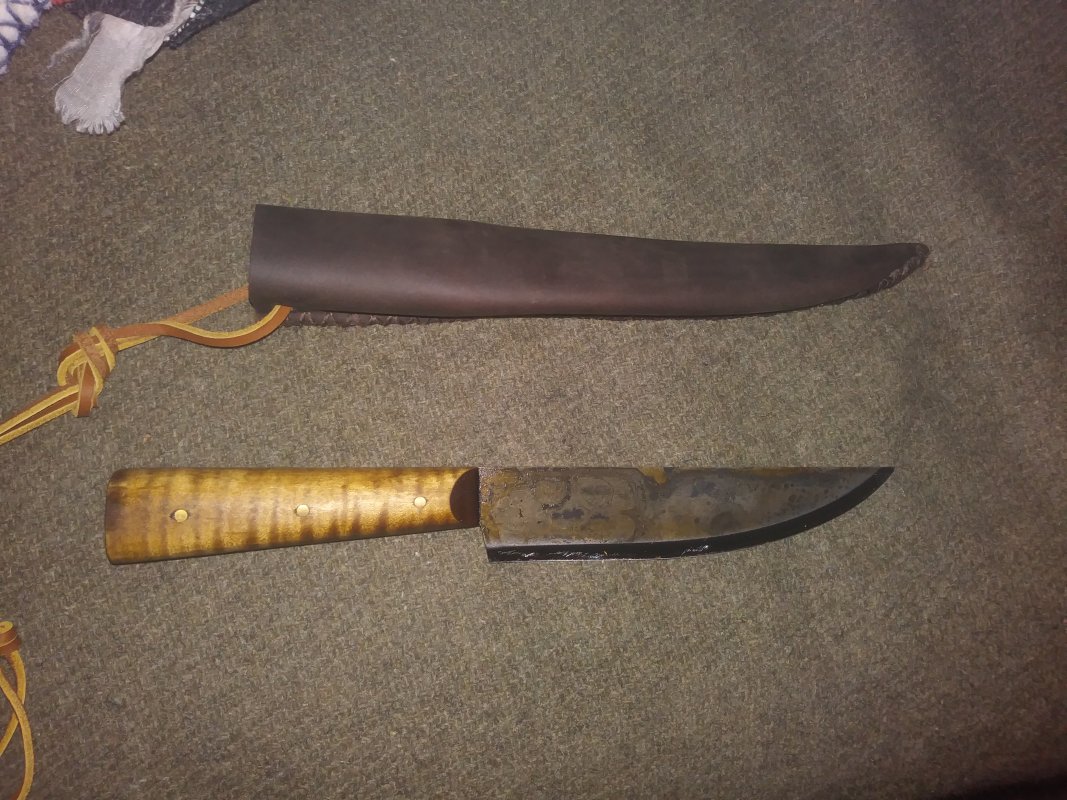 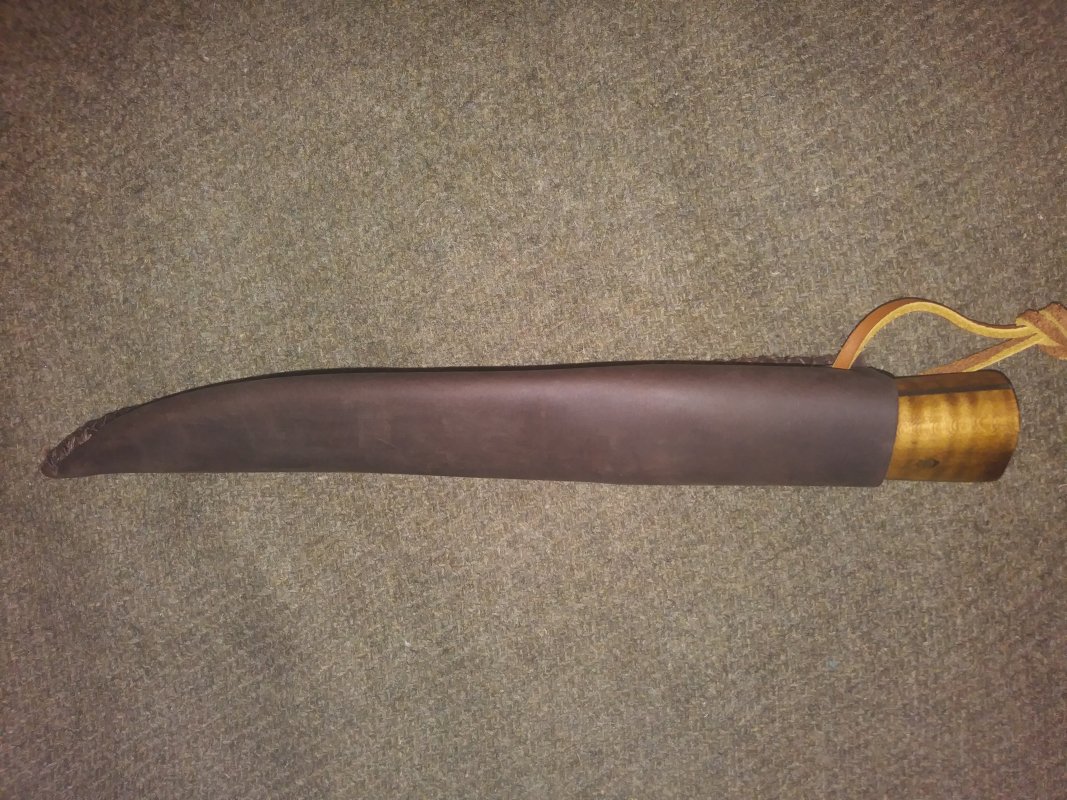 Decided to make.my own knife-sheath. A center-seam design seemed to be the easiest *and* perhaps most period correct for the early 1700s from what little info is available

The knife is deep inside the sheath, and even jostling it around won't let it work free. The strap (more knotted leather lacing) is long enough to let me tie the sheath to a belt and let it dangle bushcraft-style or tuck it under the belt for security, and I can adjust the length by sliding the fisherman knot at the top.
P

Could we see the seam side, please?
B

simonbeans said:
Could we see the seam side, please?
Click to expand... 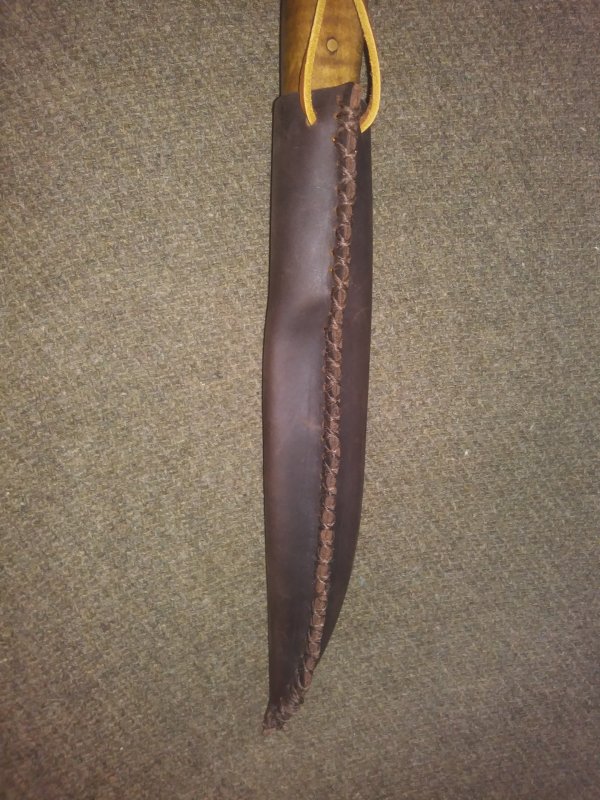 Looks great to my eye! I’m going to make somthing similar ... I like how deep your knife goes in, less chance of losing it.
L

Just a suggestion. If you would use a common saddle stitch, the seam can be flattened and give protection to the thread. This is an old, old tute, but other than doing them with back seams, that is still pretty much how I do mine. (1) MAKING A CENTER SEAM SHEATH - PaleoPlanet (tapatalk.com) This obviously is a front seam. The originals sent with import scalpers were more likely all back seams. This works well with sword scabbards also.

Thank you Wick for sharing that tutorial, I used your method on the first one I did, it came out perfect. This is the correct way to do a center seam sheath.

Of the very few 18th century knife sheaths I have seen, ALL of them were center seam. I also VERY rarely see anyone wearing a knife in 18th century images. Butchers would wear them dangling from strings hanging from a belt or their apron around their waist. Others seem to have simply thrust them under a belt.

No, I don't know what's going on here, nor the reason for the dwarf caricatures, but here you can see the knife sheath stuck under a string or sash belt. 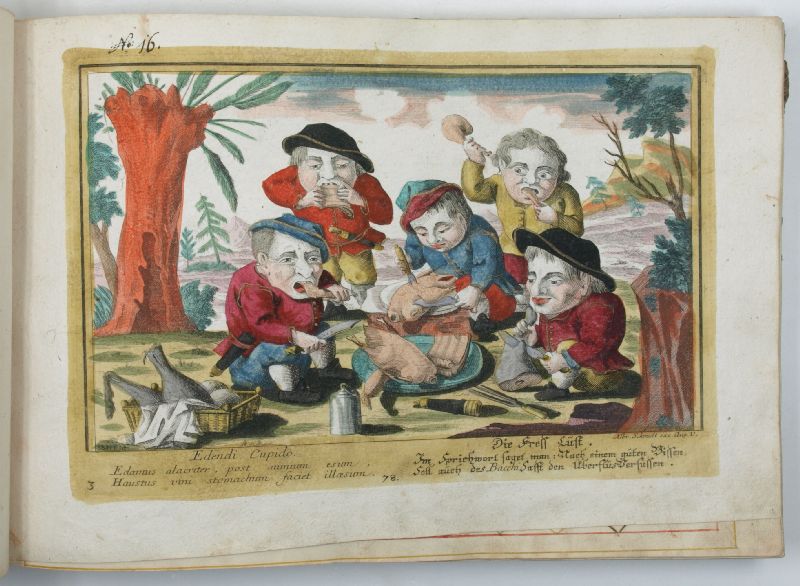 Note also. The knife being used has a clipped point. If not for the period, some would call it a Bowie knife, not knowing that clipped points go a long way back in history.
F

A lot of the modern Scandinavian Finland knives have center seam sheaths. A Rapala sheath could be used as a pattern to make such a sheath.
L

A center seam pattern is first made as a side seam, and sewn as a side seam, although lacking a welt. Then is well wetted and twisted to a center seam. That is the easy way, but there are other methods, some using a butt joint with a special stitch and a curved needle. Articifer could better give you the details of that one. I know how it's done, but have never done it.
A

Please understand I'm not trying to be nit picky, as this will make a serviceable knife sheath, but the problem with sewing the seam this way is the thread is exposed to being worn or cut.

The manner in which Wick (LRB) does it in his tutorial is how it was done during the period and the stitching is not exposed to wear or possible cutting. So the natural linen thread they used in the period will last for a VERY long time and for most of us, that will mean decades of hard use.

LRB said:
A center seam pattern is first made as a side seam, and sewn as a side seam, although lacking a welt. Then is well wetted and twisted to a center seam. That is the easy way, but there are other methods, some using a butt joint with a special stitch and a curved needle. Articifer could better give you the details of that one. I know how it's done, but have never done it.
Click to expand...

The way Wick (LRB) showed in his tutorial is almost without a doubt the most common way to make a period knife sheath, as that's how they made sheaths for trade knives. The sheer numbers of such sheaths meant it was most likely the most common method folks would see how a sheath was made and thus when they did it, the most copied method.

Making a sheath for a knife using the butt stitch method was not nearly as common because you almost have to have a metal tip/drag for the pointy end of the sheath and another metal throat for the top of the sheath. Some 18th century knife sheaths were made like this, but because they needed the metal throats and tips/drags, they were usually only used on high end knives, though not always.

When you want the leather to meet "flat to flat," it was/is sewn as in the following drawing: 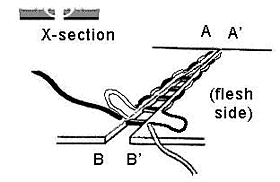 It looks like this when the leather ends are sewn up: 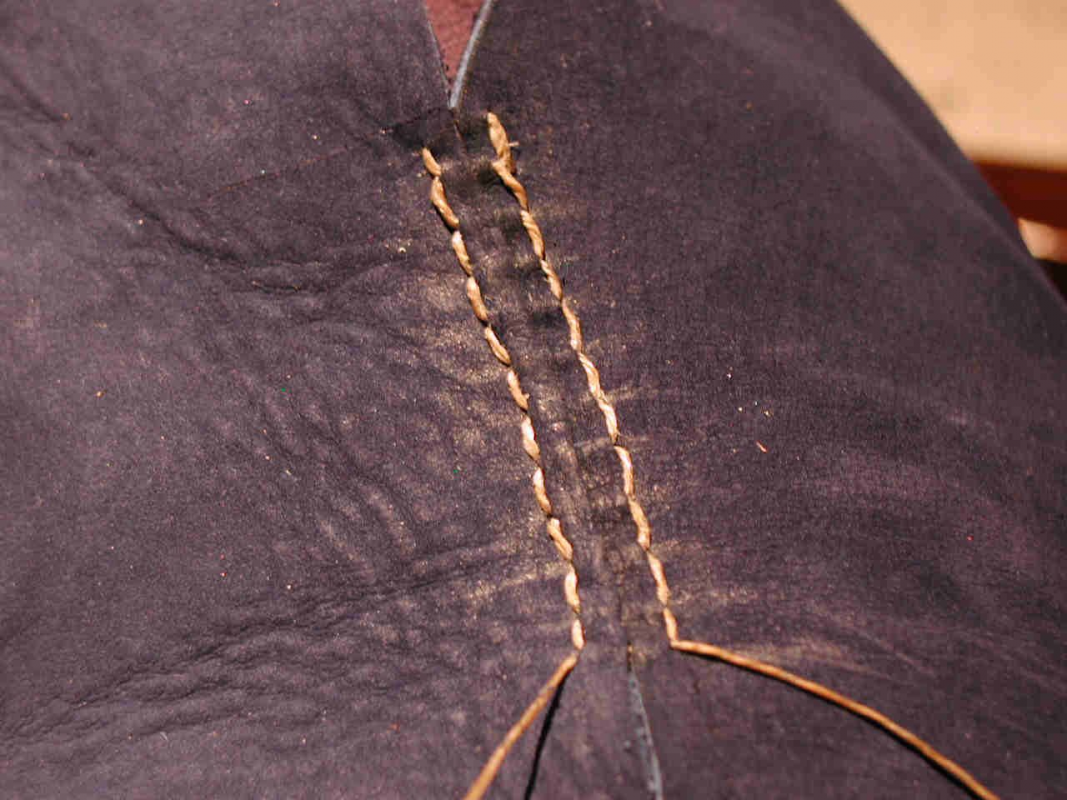 You can use a straight awl to pierce the leather, BUT ONLY IF you use thick leather, as shown in the next pic. 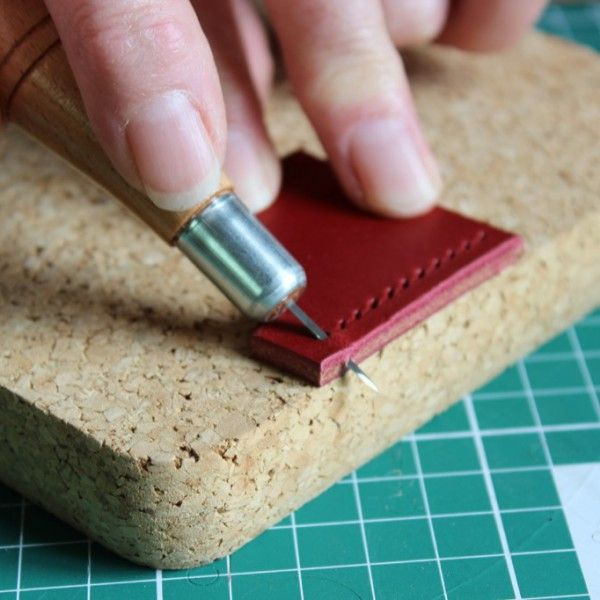 Unfortunately, I could not find a really good pic of the more period correct way of using a CURVED awl to pierce the leather for the holes. With the curved awl, you start to piece the leather where you marked your holes, then sort of roll the awl so it comes out in the center of the leather. Here is the best pic I could find:

The top awls in this pic are the best with more curve in them for sewing leather for sheaths; 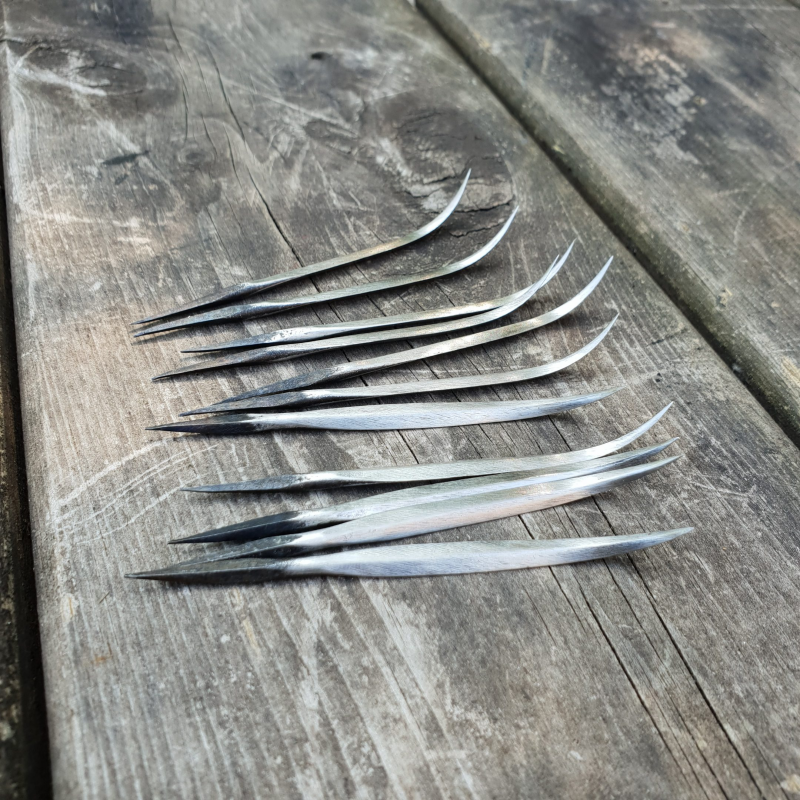 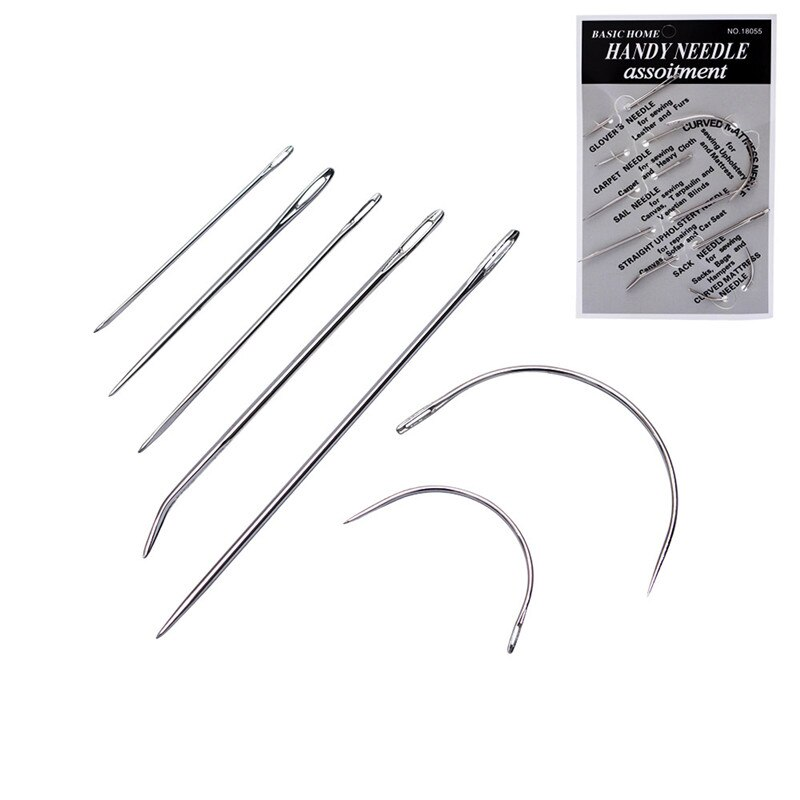 Oh, sometimes when the leather is not very thick, you don't need a curved awl and can pierce the holes with this type of curved needle: 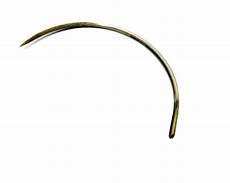 I use the butt stitch mostly for sword scabbards with metal tips, bayonet scabbards and sliding loops on belts or hunting pouch straps. 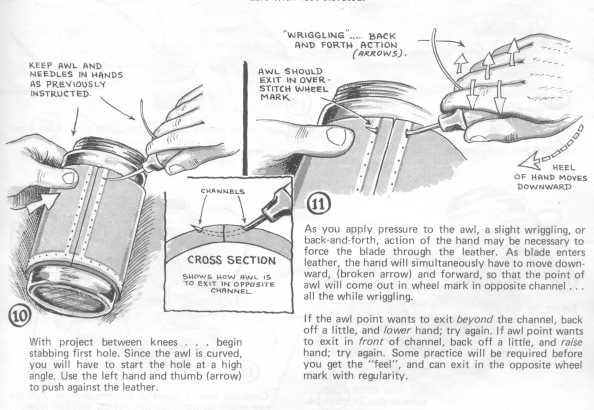 I need to practice doing this, myself. Not for knife sheaths so much, but for doing the rear seam of shoepacks/souliers de boeuf. This type of stitching is seen on all kinds of different 18th century leather work.
A

I need to practice doing this, myself. Not for knife sheaths so much, but for doing the rear seam of shoepacks/souliers de boeuf. This type of stitching is seen on all kinds of different 18th century leather work.
Click to expand...

I needed to know how to do this stitch to replace the really poorly sewn replacement leather on our Family Model 1850 Foot Officer's Sword. I remembered I had seen that stitch on 18th century dice cups displayed in the Cordwainer's and Saddler's Shops at Colonial Williamsburg. So when I returned to VA in 1980, I waited in the Cordwainer Shop for a gaggle of tourists to go through before me, then I grabbed a dice cup, pointed to it and asked, "How do you make this stitch?" I was extremely surprised the Master of the shop brought me behind the counter and into the work area of the shop, sat me down at a Cordwainer's bench and taught me how to do it!! He gave me a little over an hour's free instruction while answering more tourist information between. I spent about 4 hours in that shop and wished I'd had time to stay and learn more! What a thrill that was!!

Having used this stitch many times for sword scabbards, bayonet scabbards, leather loops and a few period dice cups, etc.; I personally don't try to stab through both edges of the leather at the same time - unlike what is shown in the illustration. I mark the stabbing points on both edges with a round over wheel or pricking iron, then stab in all holes on one edge at a time - to better ensure I'm going through the center of the leather as the awl comes through the edge.

I believe the above illustration comes from the book:
The Art of Hand Sewing Leather Paperback – January 1, 1977
by Al Stohlman (Author)

I began sewing leather in 1972 before that book came out and Boy I wish I had that book to refer to from the beginning! I still refer back to the one I bought in the late 1970's - right up to present day projects.

For those who don't have the book, I just found it online!!!! Here is the link: