Originally posted this in the photos section but thought it would reach a more interested audience here.
I spent a few weeks in October hitching around Dagestan & Chechnya. While there, I was perusing the local antique markets looking for some miquelets, kindjal, and shashka. I managed to find myself a honey hole in Makhachkala. The pistol itself is a restored piece, only original pieces are the barrel and lock. The lock in the white is a new made piece as well. They are still made in the same village, Kubachi, as they were 200 years ago. 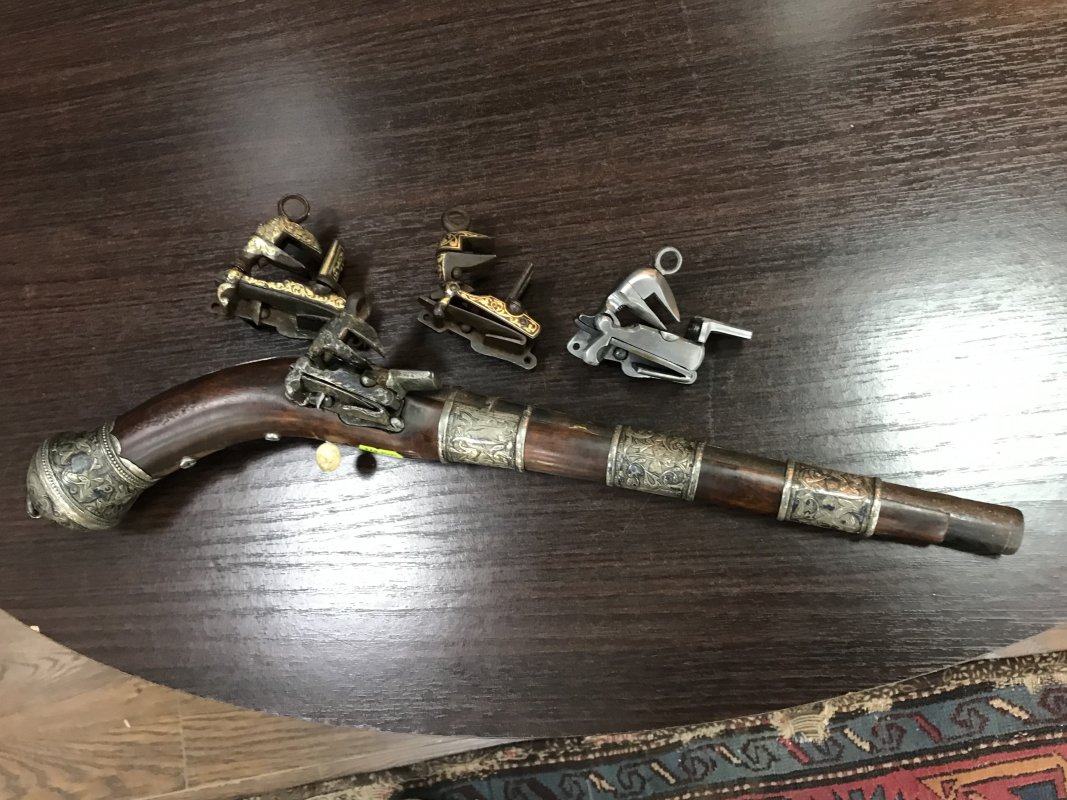 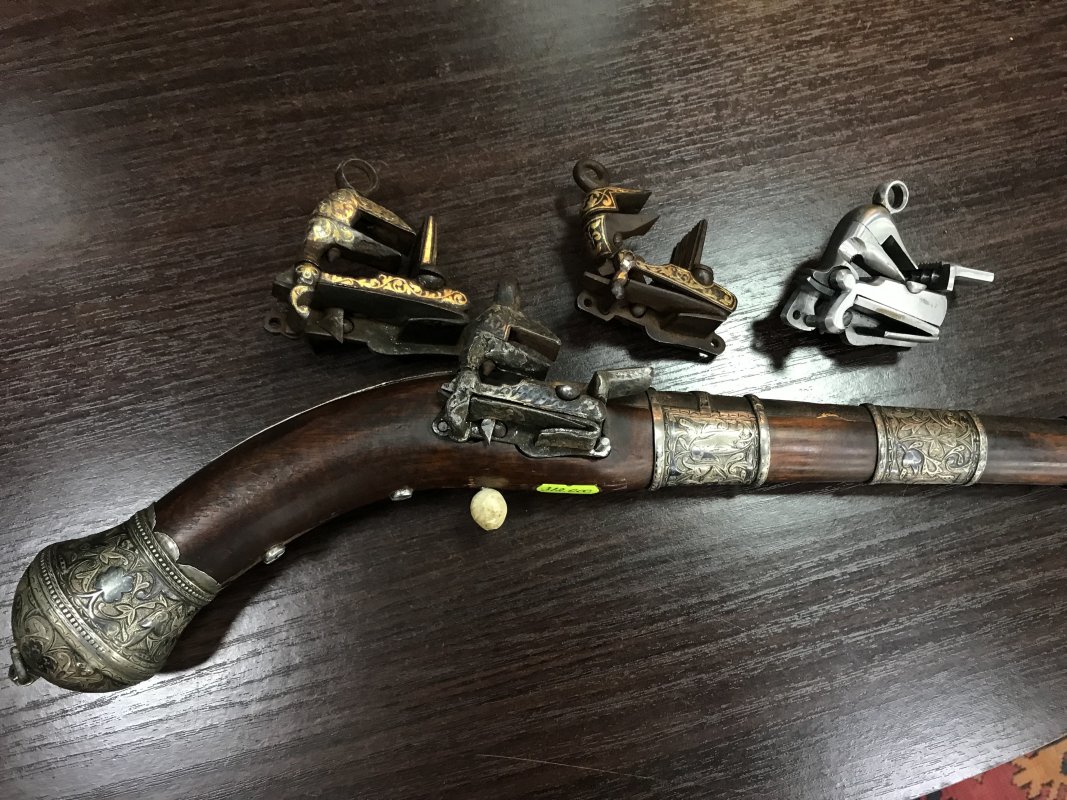 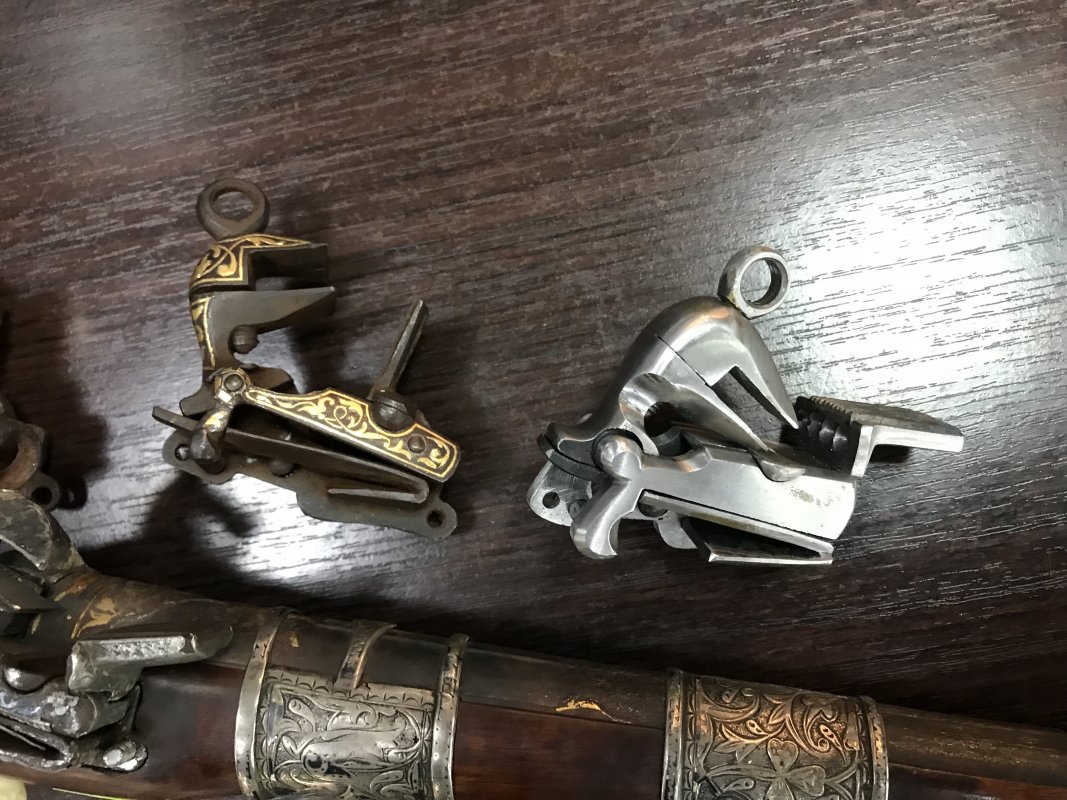 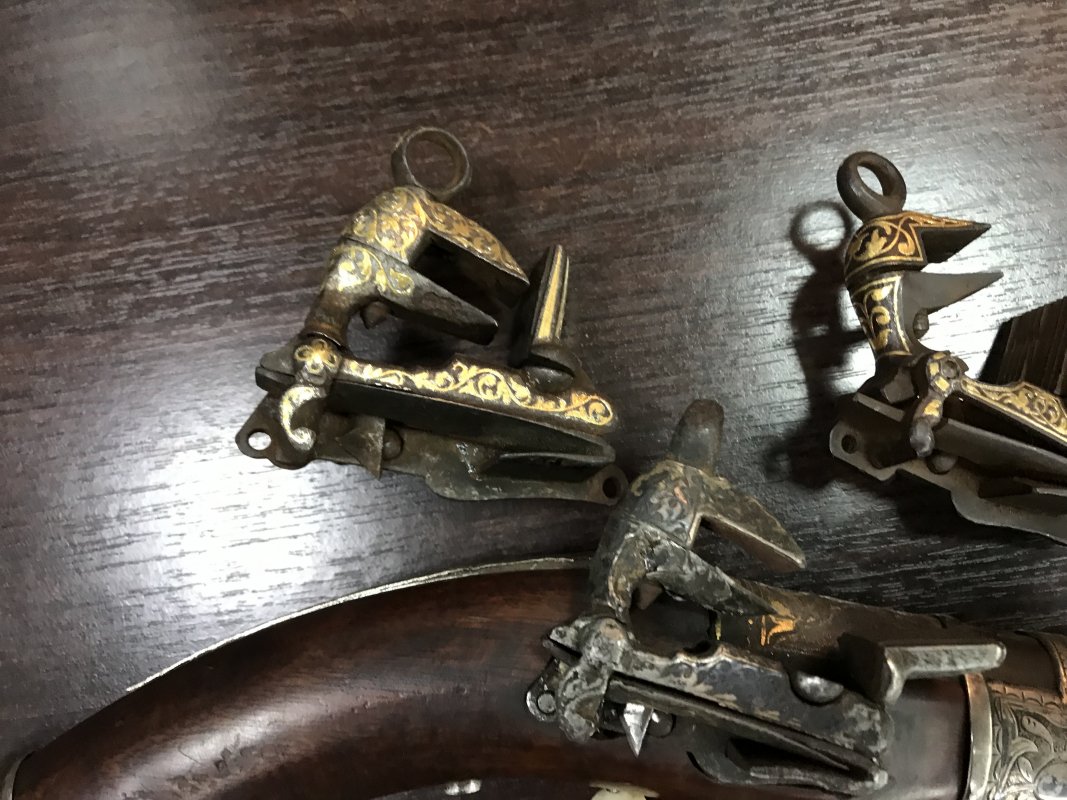 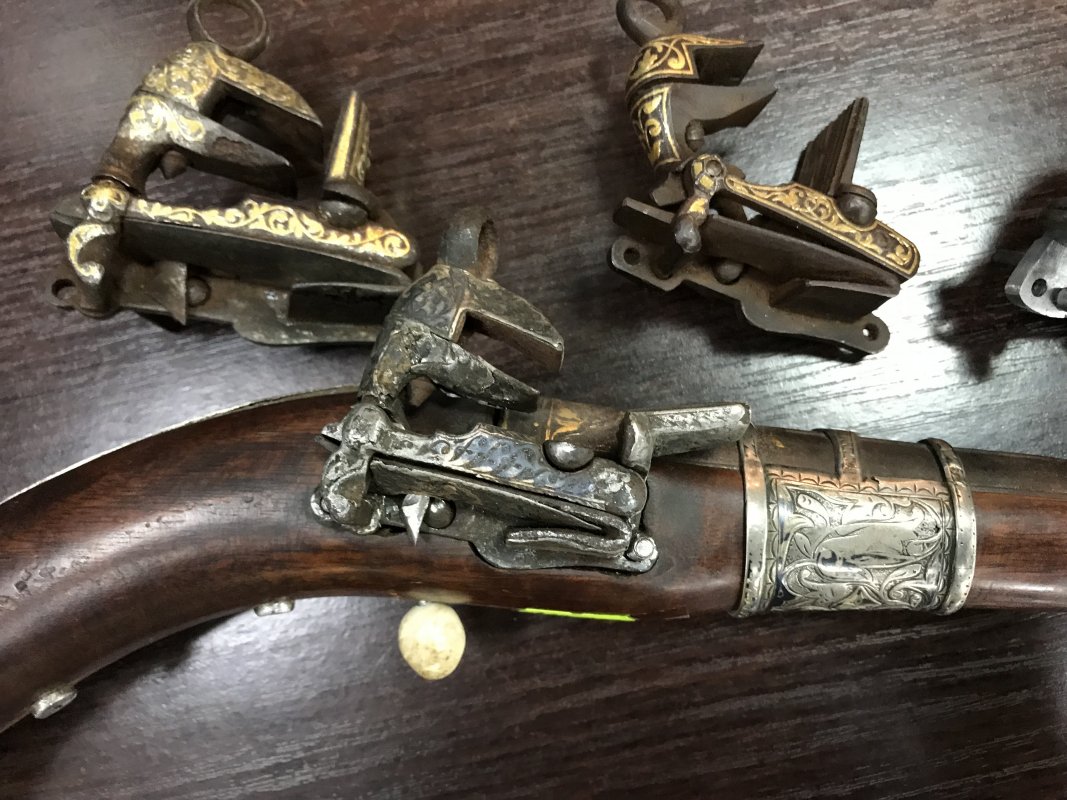 Here is a shot of what the market had on display. After some discussion with the owner, I was taken to the workshop where he showed me boxes of original antique pieces that he was using for restorations and gave me the opportunity to handle his personal rifle that had been in the family since it was built in 1861 (and was dated as such) 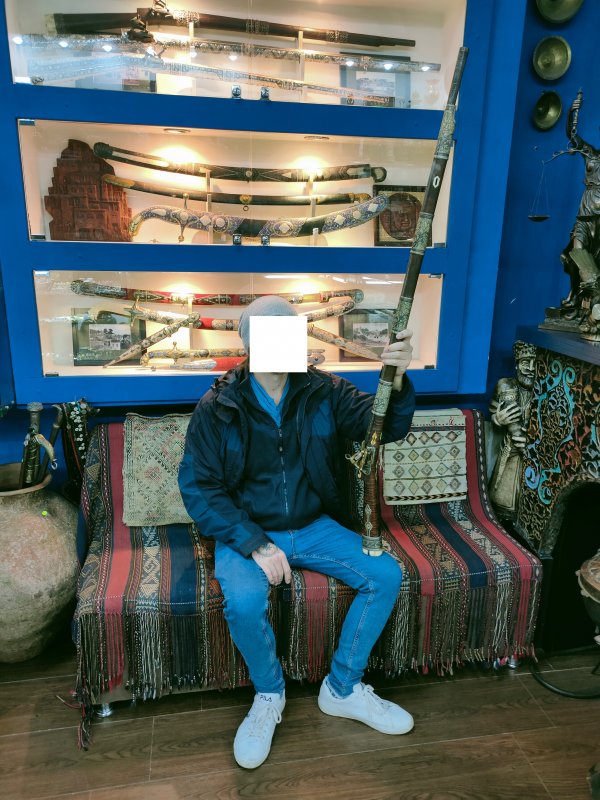 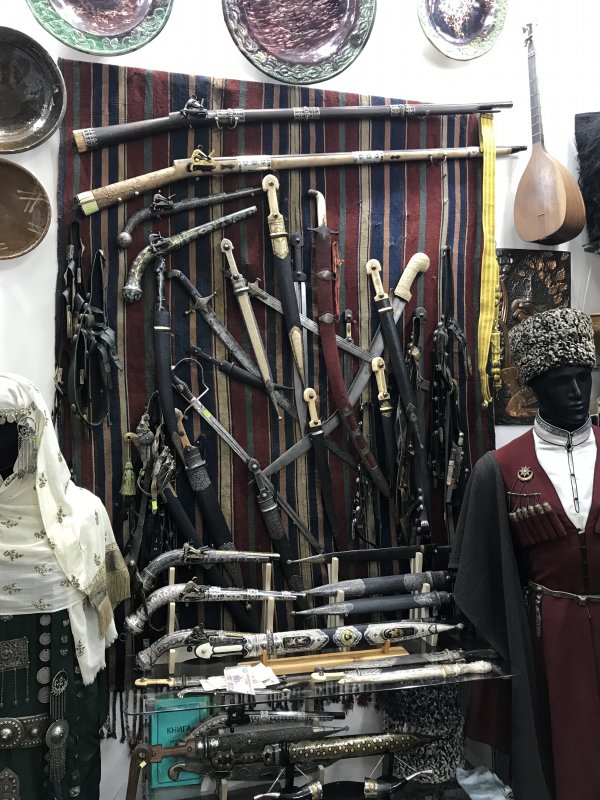 Further south, near the Azerbaijani border, an old woman overheard me asking about antique arms at the bazaar and aske me to come to her home for tea and that she had somethings I may be interested in. She had an incomplete lock, a pistol and a kindjal dated 1911 as well as some other antiques that didnt fit my interests, but quite the visual treat nonetheless! 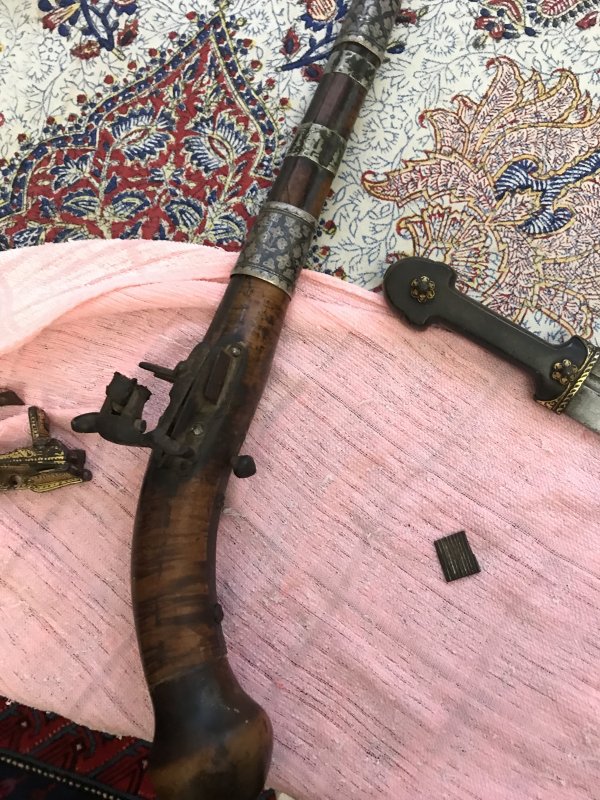 Thanks so much for posting these photos along with information on your visit. Wonder if this shop with restored pieces has a website offering their restored items for sale ? Very cool. 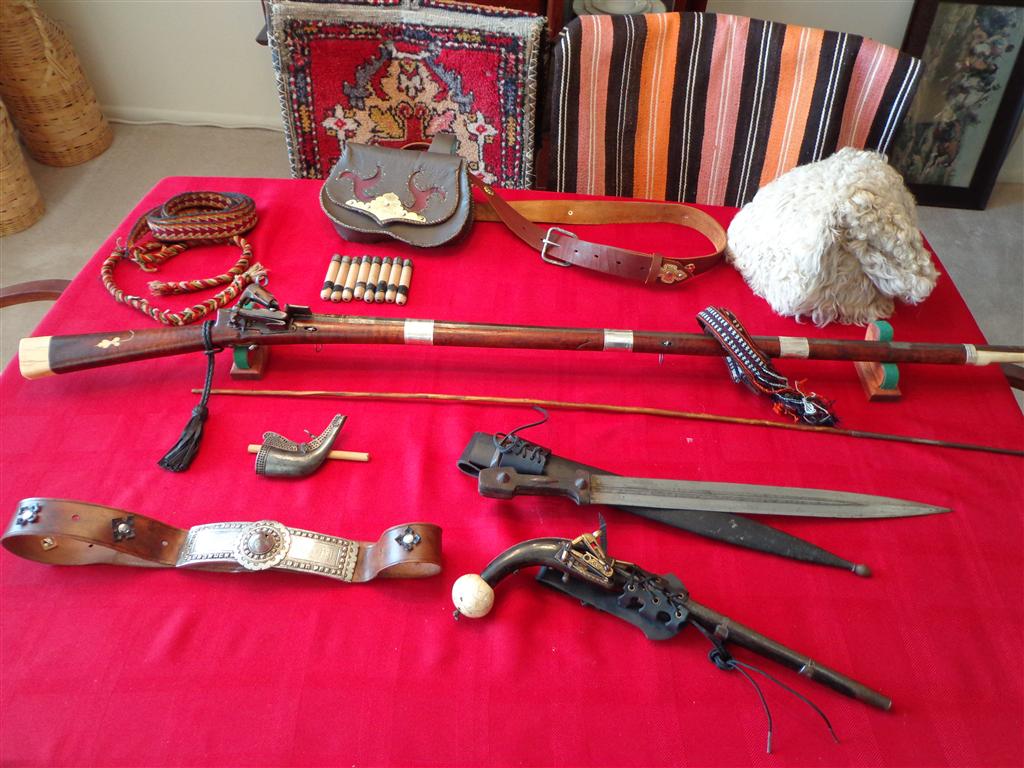 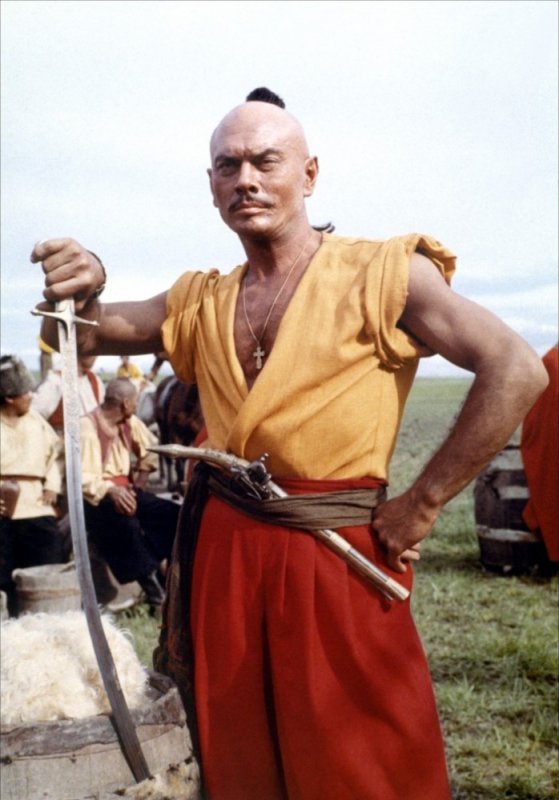 Thanks so much for posting these photos along with information on your visit. Wonder if this shop with restored pieces has a website offering their restored items for sale ? Very cool.

shoot me a PM and I can connect you

btw, that belt you have should be decorated with dozens of coins like the originals!
R

cyten said:
shoot me a PM and I can connect you

btw, that belt you have should be decorated with dozens of coins like the originals!
Click to expand...

LOL!!! I didn't have any original coins. LOL But you are correct. However, the original buckle now has a new belt - that is adjustable for different waist sizes.

Still looks cool, Thanks for sharing !

Since the Ottoman Guns thread has garnered interest, I thought I'd post a bit more here about their eastern neighbors, the Caucasus. Where the Ottoman rifles varied in style and barrel length, the Caucasian Ruzhe (ружье) always have a long barrel and pool cue type stock. The barrels tended to be supplied via the Crimea, the main gunsmith centers were in Tbilisi (Georgia) & Kubachi (Dagestan). 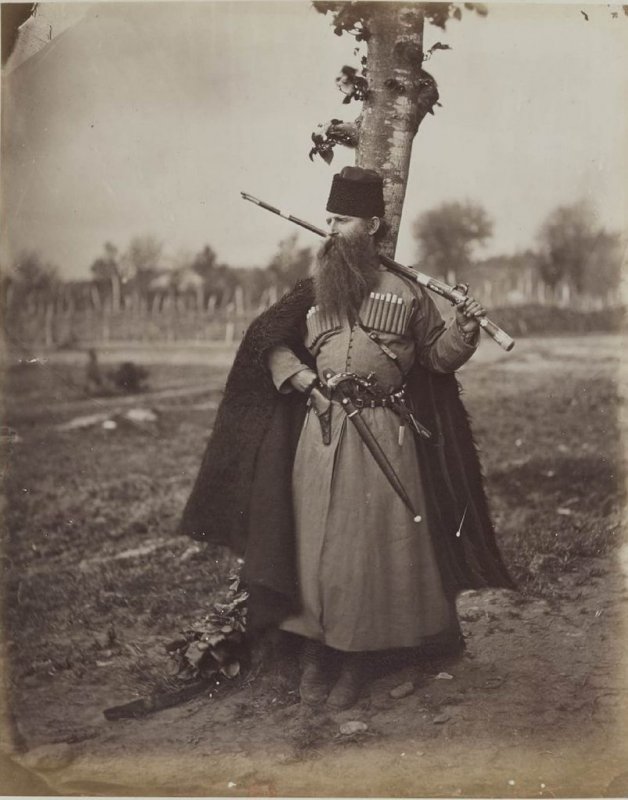 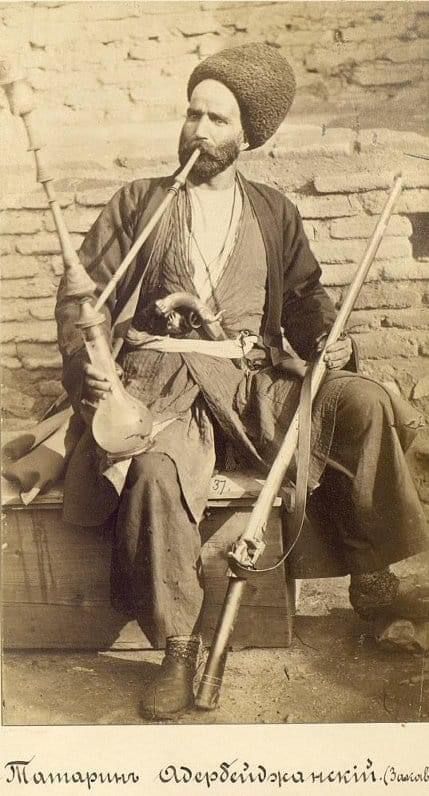 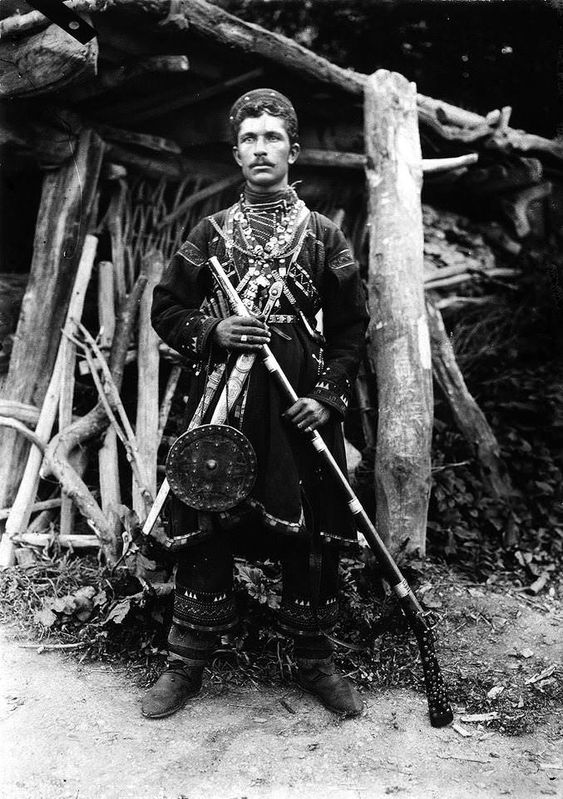 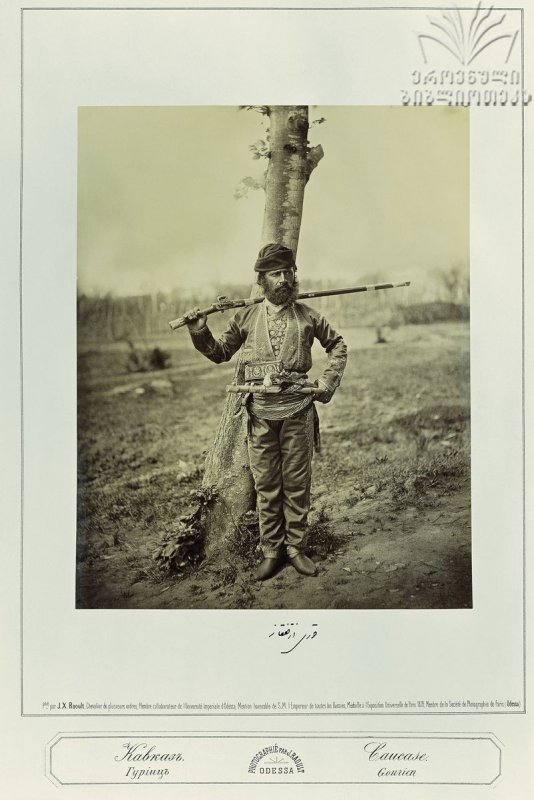 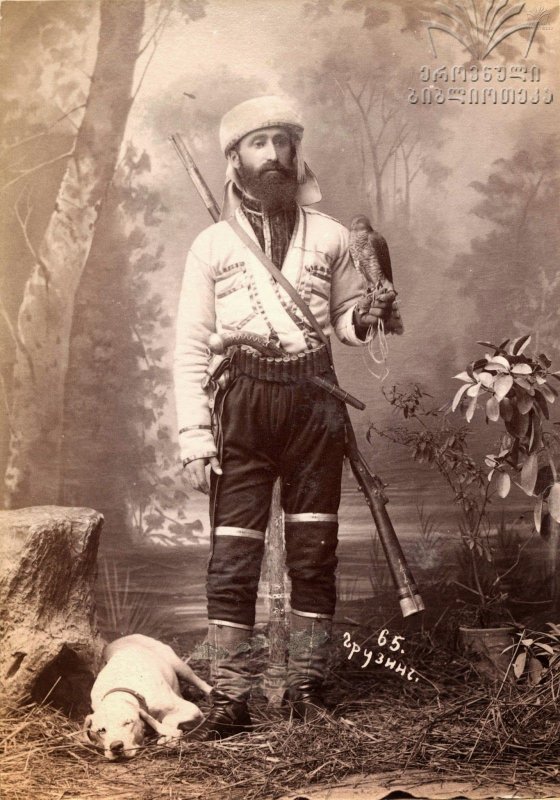 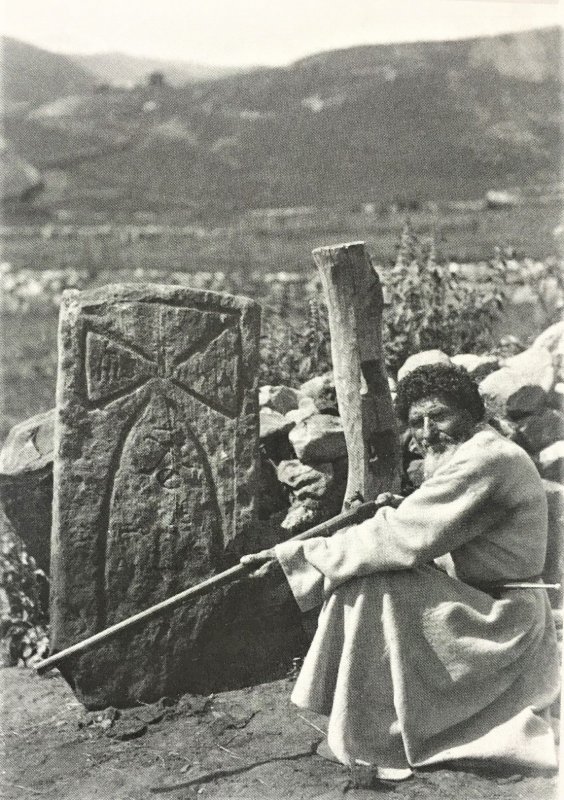 These Miquelets served in an official capacity even in the Russo-Turkish War 1877-78 on the both sides. Imagine, going up against Turks armed with Winchesters!

Gurian soldiers fighting for the Russians. 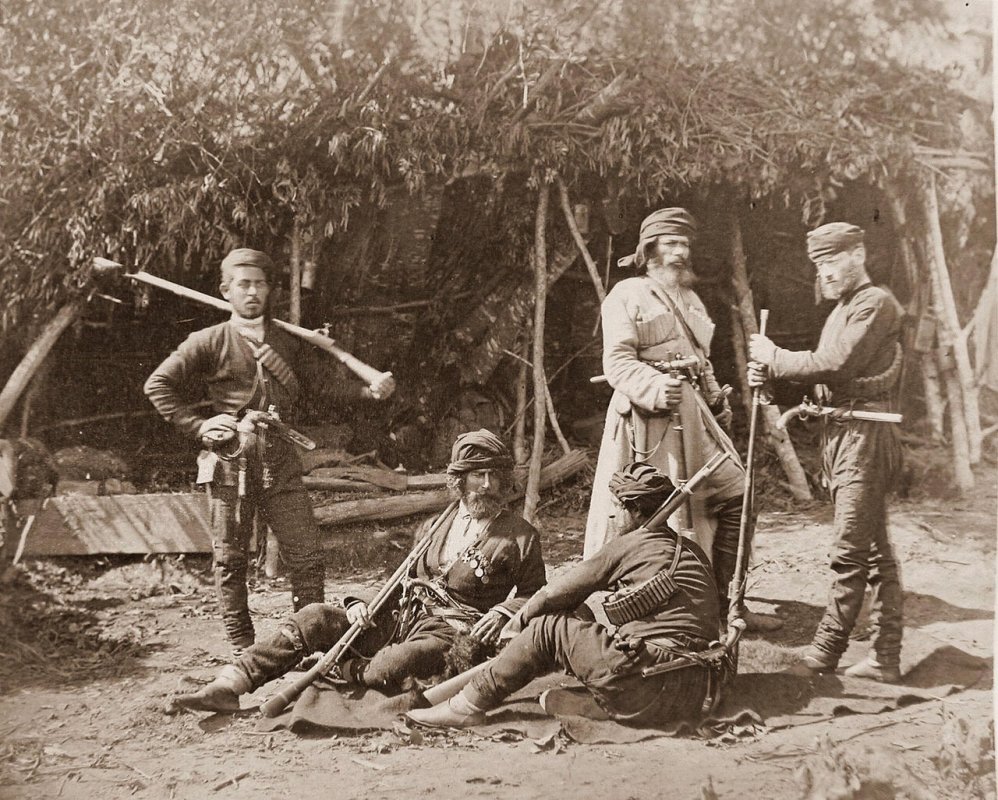 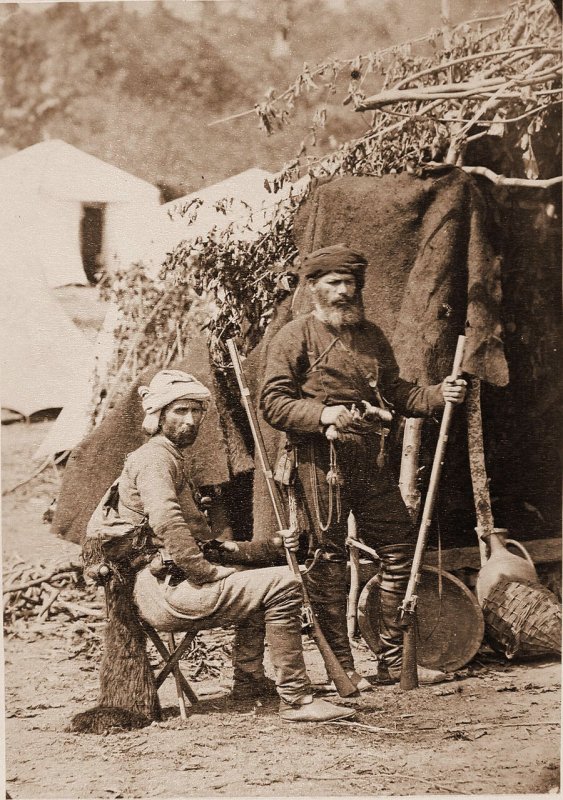 Kobulet Soldiers on the Turkish side 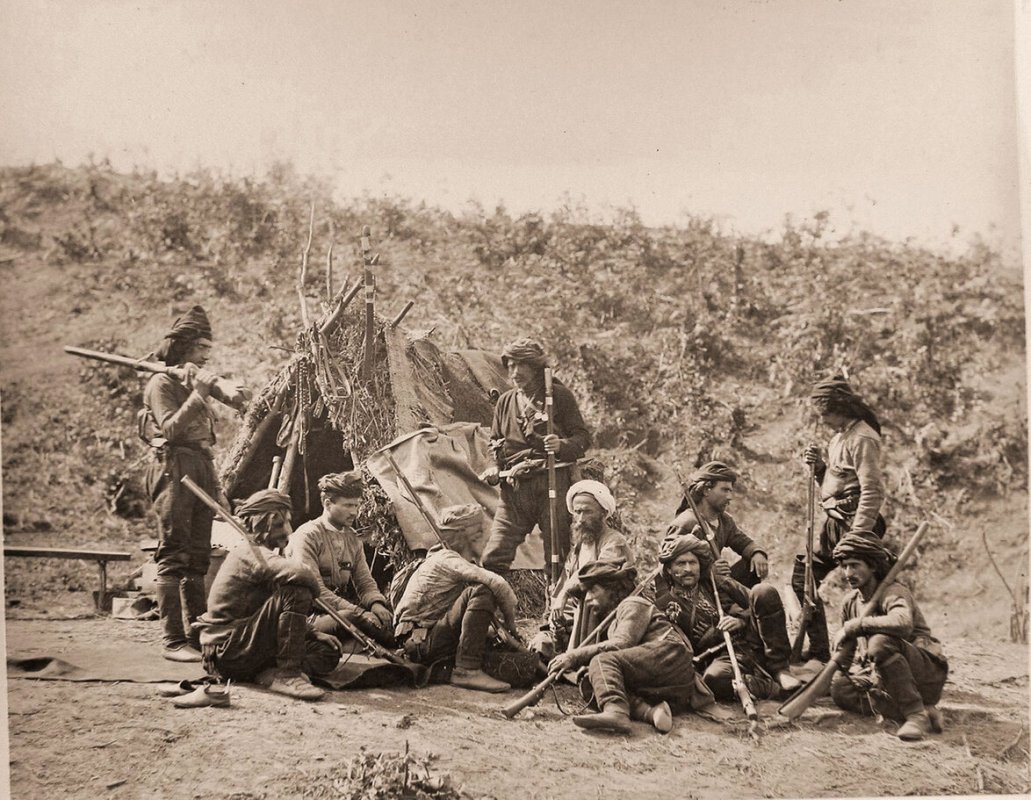 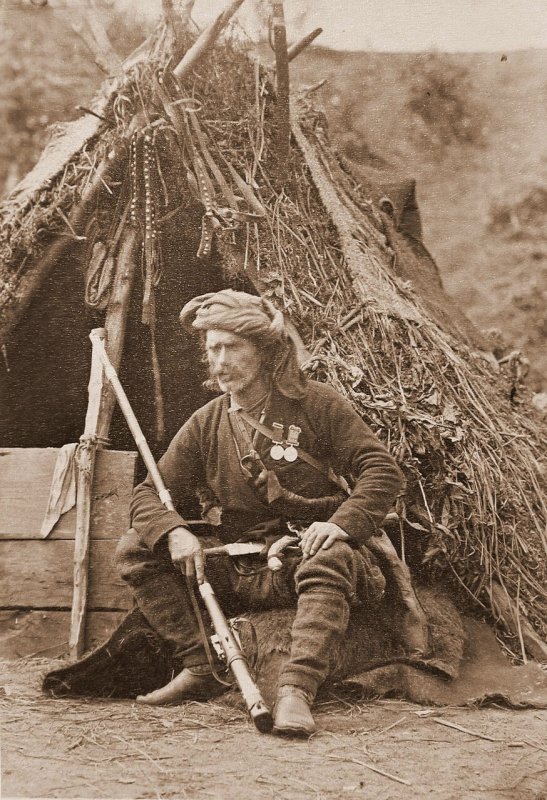 Unlike the Ottoman guns, there actually is some literature on their study, however, only in Russian. My Russian runs poor to nil, the wife is a native speaker but her gun terminology is lacking. Someday will have this done 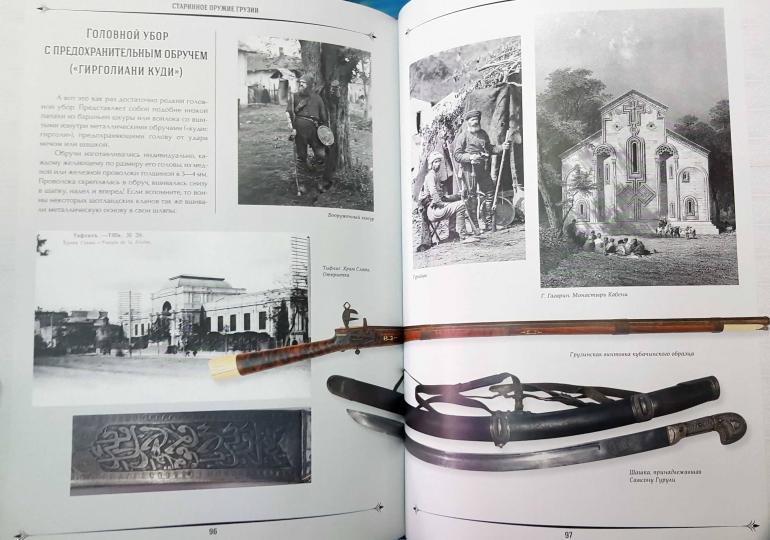 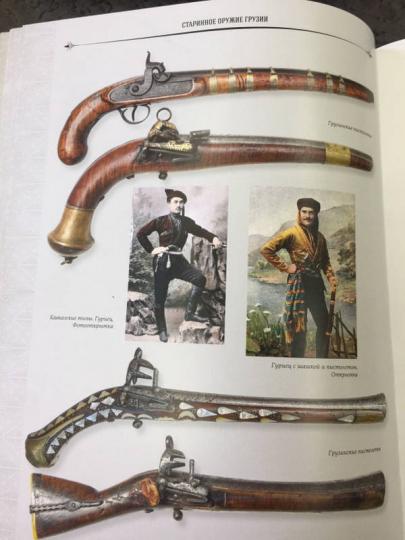 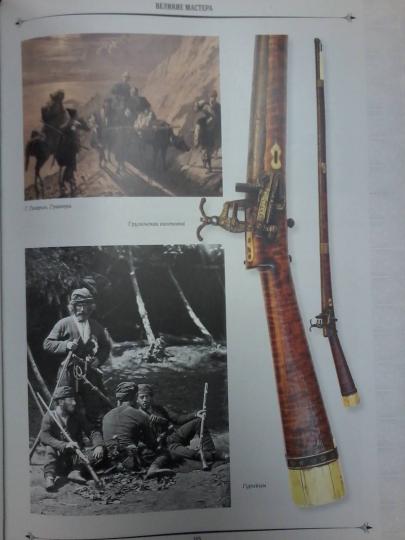 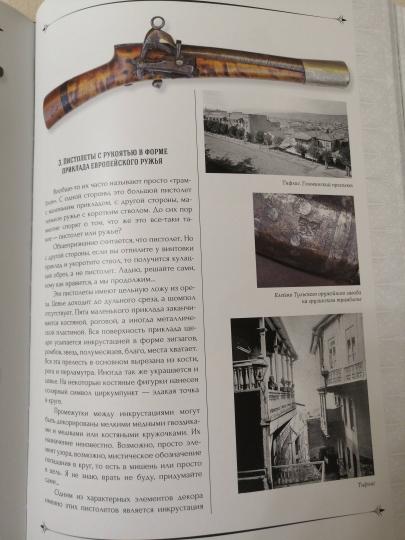 and to some original pieces that did have Flintlock mechanisms 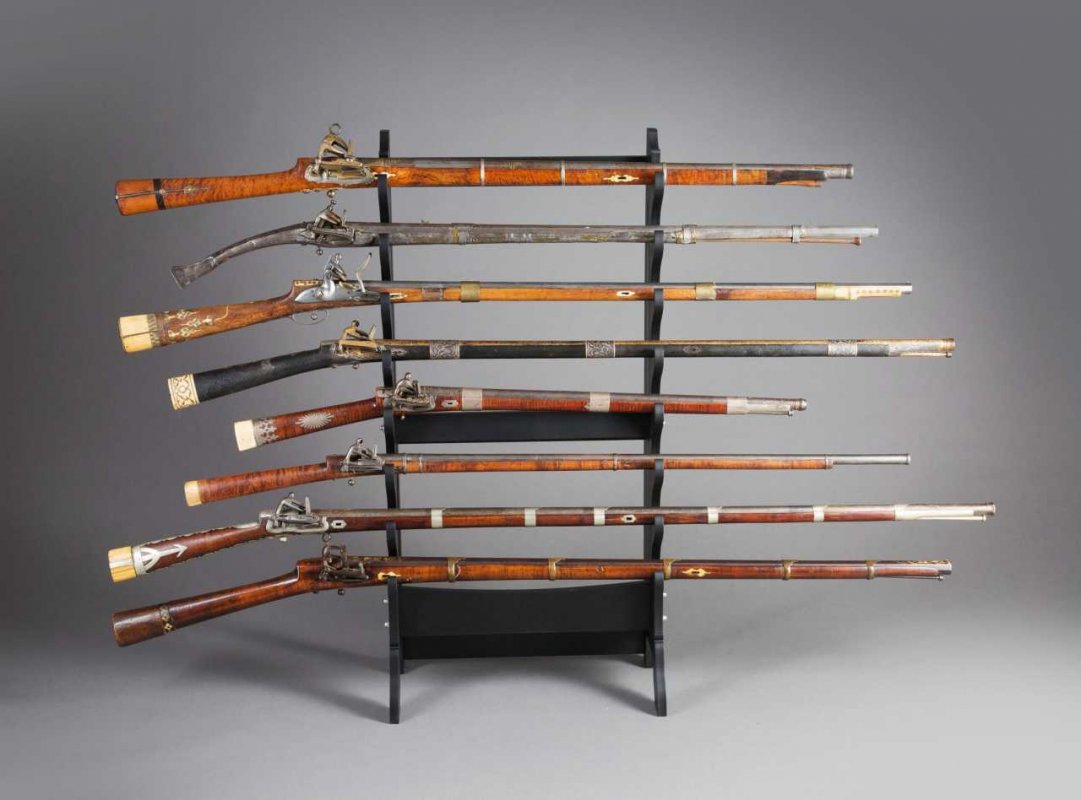 Thanks for the additional photos. Yes, guns from the Caucasus have their own unique style. And they tend to command higher prices at auctions than other Eastern guns. Some features of these guns:

Stocks: As mentioned in the other Thread, the round butt stock design is believed to be of Persian origin. Usually made of high grade
Circassian walnut. Often the stocks of the long guns are made in two pieces, with the splice being located approximately the center of the forearm. The last photo you posted of the rack with 8 long guns: Note the one in the middle with the black colored stock. It's likely that the entire stock is covered in black leather. Another unique feature with some of these guns. But usually, you see the leather covered stocks on the pistols. So it makes this long gun some what of a rarity.

Locks: The first photo you posted above with the pistol and detached locks. This style of miquelet lock is also thought to be of Persian origin. It's one of two common lock styles found on these guns. The other common lock is commonly referred to as the Ciscassian variation. I'll post photos of both below. Occasionally, you find a rifle/pistol with a more traditional, late French style flintlock, but not often.

Barrels: Interesting I've never seen a long gun in smooth bore. I guess they were made (?) but have never seen one. They were all rifled with 7 or 8 groove rifling and around .50 caliber. The rear sights always mounted at the far rear of the breach, as was more common than not with Eastern long guns in general. Every pistol I've seen was smooth bore with no sights.

Hardware: Another interesting feature with these guns. With the exception of an occasional small inlay/decoration, I've never seen one of these guns mounted in brass. They are all mounted iron, silver, horn, ivory/bone. Often in combination. With button triggers and no guards. 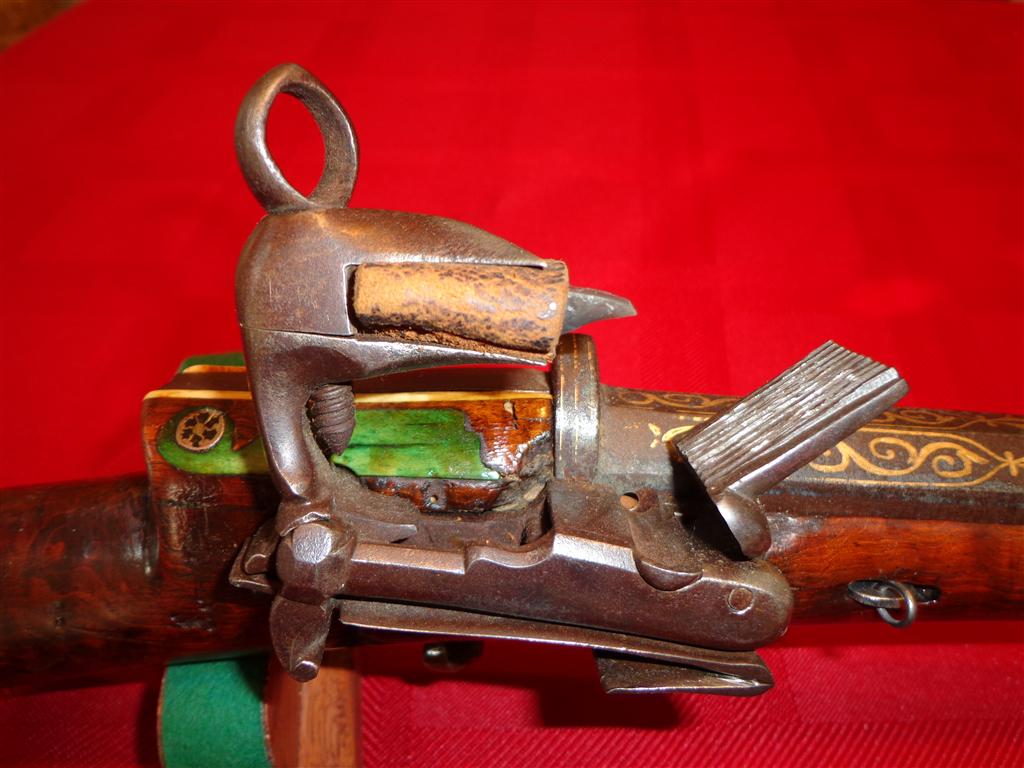 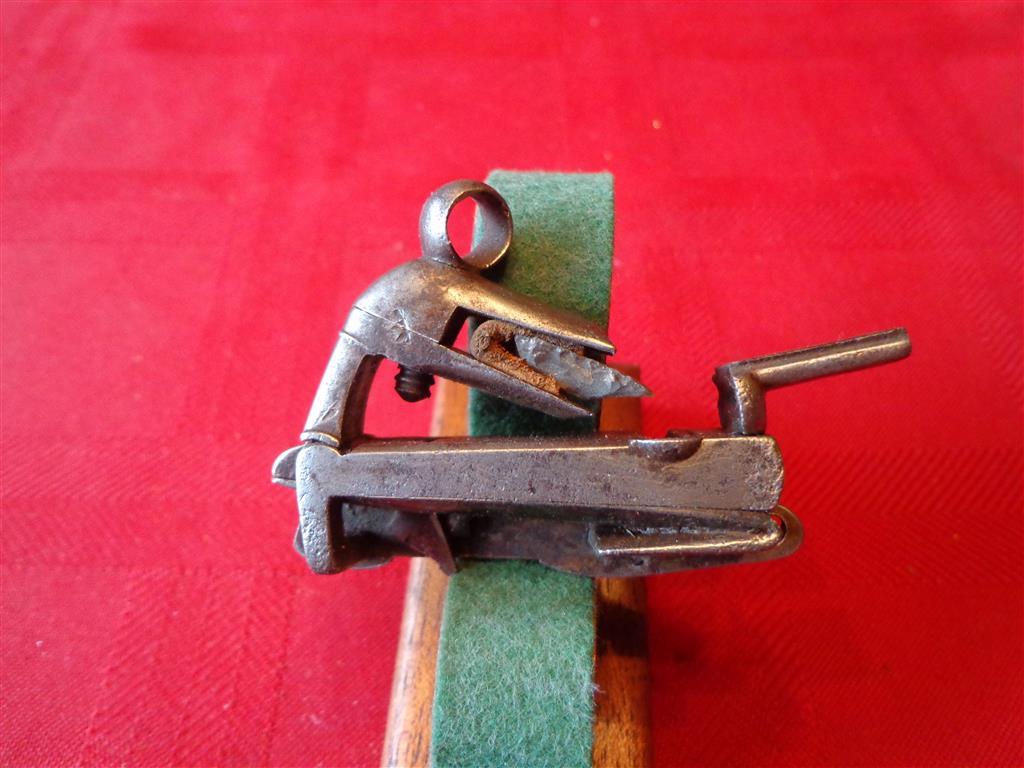 Ricky, thanks so much for the insight, appreciate it from someone who owns and has shot these rather than just handled them, like me. Even in Russia and the Caucasus, these command a very high price, with the lowest for a rifle being $5000 +/-
Leather covered stocks are very unusual for long guns, but I guess if you cant afford to have that gorgeous Circassian walnut, who cares?
Interesting you mention the locks are thought to be of Persian origin, all the Persian guns I've seen had western styled locks and many converted to percussion. I had the opportunity to purchase a Circassian lock before I left Russia, but something came up and I had to leave before the deal could be made.
Regarding hardware, brass is rare but not unheard of. Silver with Niello was always much preferred and the Caucasus is well known for their silversmithing, even today Kubachi (Dagestan) silver work is highly regarded throughout Russia and former Soviet countries.

cyten said:
The barrels tended to be supplied via the Crimea, the main gunsmith centers were in Tbilisi (Georgia) & Kubachi (Dagestan).
Click to expand...

Those photos are amazing!
And those men look like true killers!
I would not want to face them, unless for coffee and a smoke.
T

Brazos John said:
Those photos are amazing!
And those men look like true killers!
I would not want to face them, unless for coffee and a smoke.
Click to expand...

I can see this big pile of Turkish rifles for sale with a sign, 'Only dropped once!' But all kidding aside, the Cossacks are famous as fighters, as are the Turks. You should be in a Greek bar when a bunch of Turk sailors stroll in...

I find it interesting that in almost every photo, they have handguns as well as their rifles...
2

they make the wild bunch look like choir boys

out there , they kidnap the choir boys and have their way with them .... many are Godless

golden sky said:
out there , they kidnap the choir boys and have their way with them .... many are Godless
Click to expand...

Armenia was the first country to adopt Christianity in 300 AD, Georgia shortly after in 319, that’s 300 years before England. Azerbaijan and the Russian Caucasus are devout Muslims, you’d be hard pressed to find godless people in this region.
Most guns/swords have some sort of religious inscription on them.

Apr 17, 2022
rickystl
R
B
This is from the Colorado State Muzzle Loading Association Journal

A Visit To The Rifle Shoppe
2