I spent some time with all 4 of my Pietta .36 Brassers today

I tried some 25 yard Bullseye type shooting with my de-levered pair of .36's.

This is my first time using a cylinder loader at the range, and it was more convenient for range shooting. I had an extra cylinder also. It was actually fun swapping cylinders out , it's hard to describe why it was fun, but pushing the wedge out to break the gun down to pop in a fresh cylinder was cool.

The guns obviously hitting high like they're supposed to made Bullseye shooting challenging but this is how they were designed. Piettas are extremely accurate.

All 4 of my brassers have an early bolt drop. I spread the bolt legs on one of them and it's not as bad but if I pull the hammer back just a bit past half cock, the bolt drops. They are not properly timed but I'll work with them. I don't suppose a Uberti bolt would fit. I'll do my best and I'll probably just live with it. They function fine , I just have to be aware not to move the hammer too far back. It makes the hammer draw on one of them a bit rough. I could probably Polish the internals up with Mag Polish and see what happens. The bolt drag line on the cylinder of a $200 repro doesn't bother me.

Two of them were cap jam machines, and two had no problems with this at all. Both have the stock nipples , using CCI #11's. Mysterious. Maybe I'll track down some Slix Shot nipples. 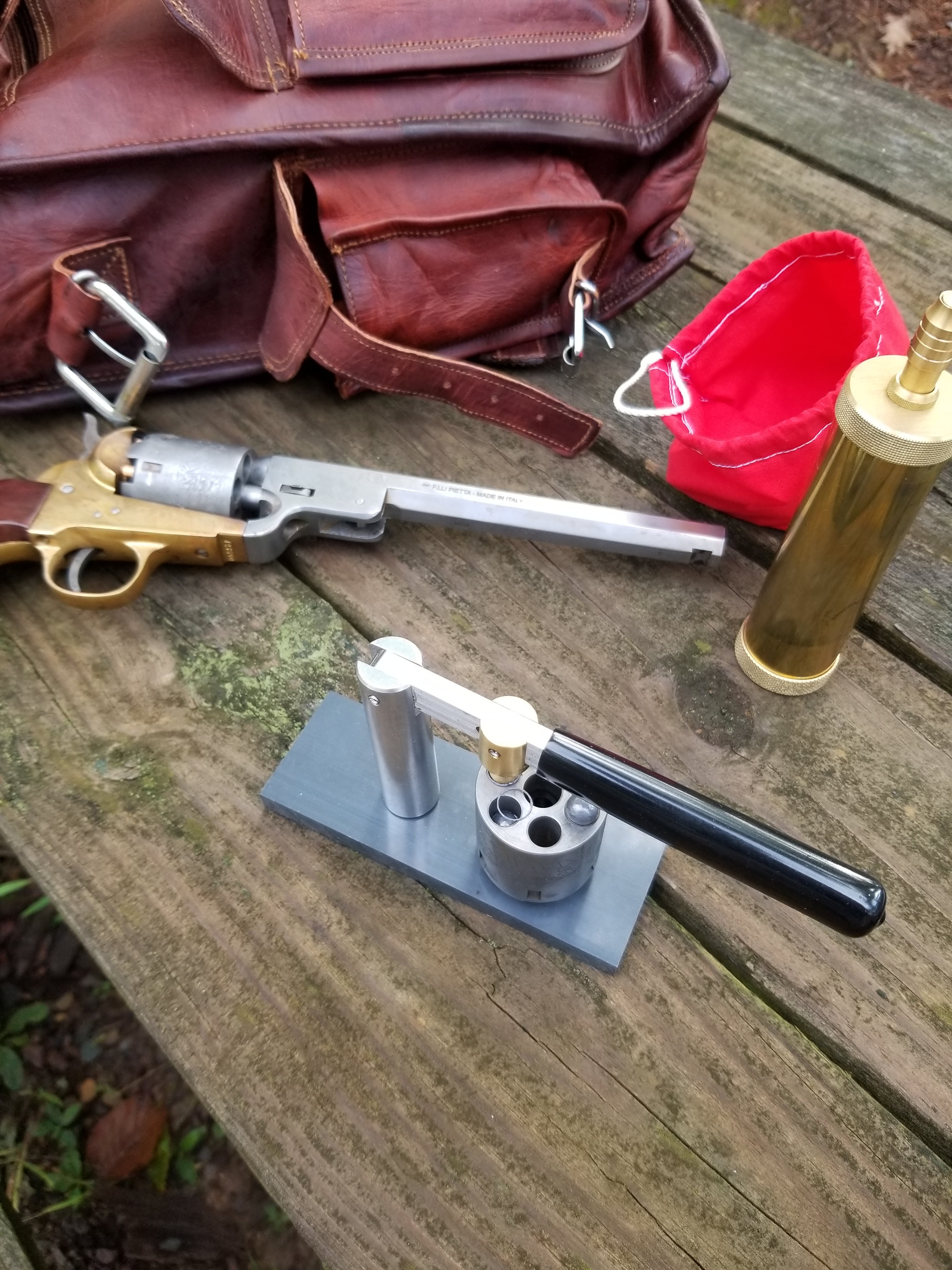 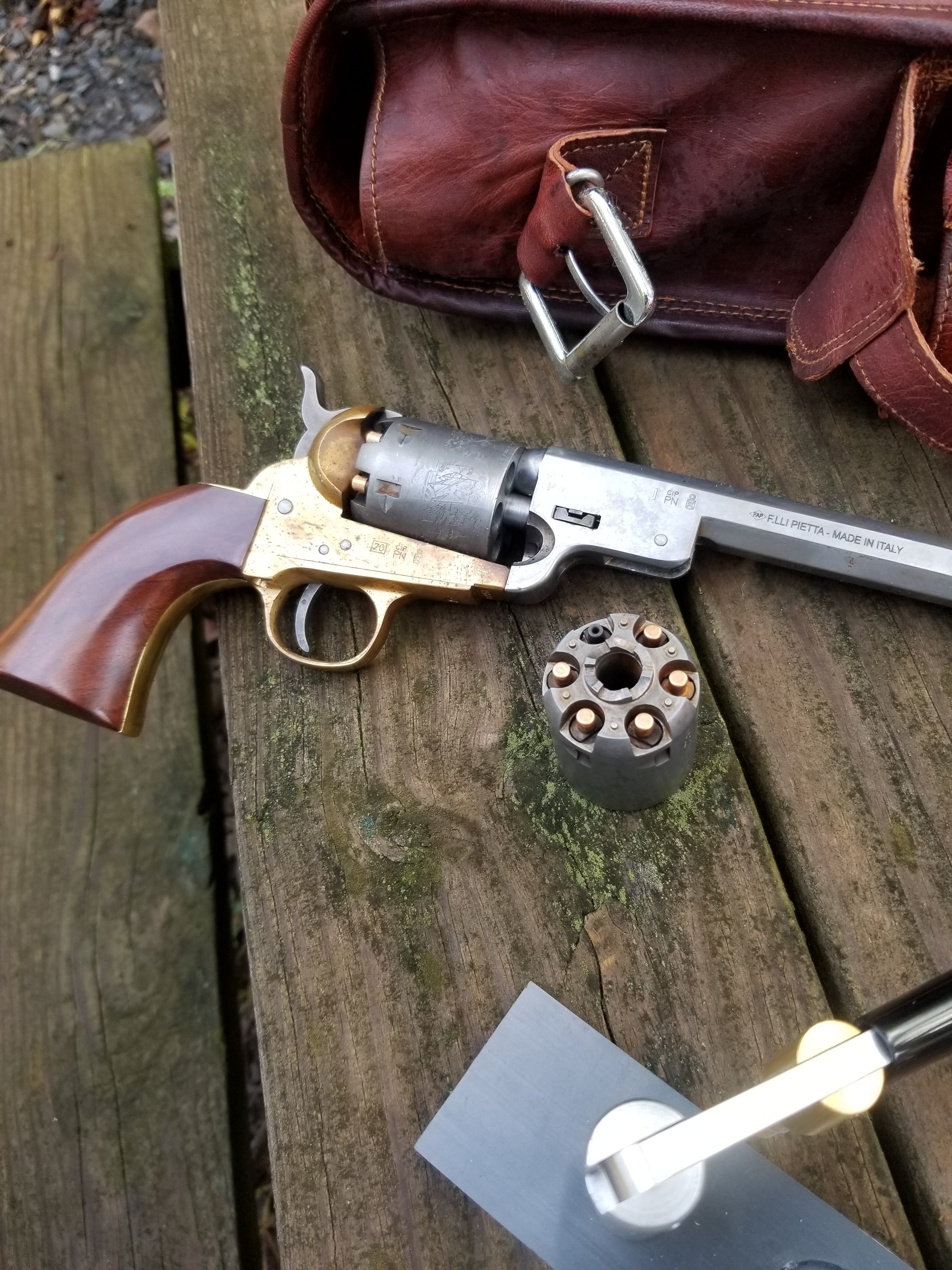 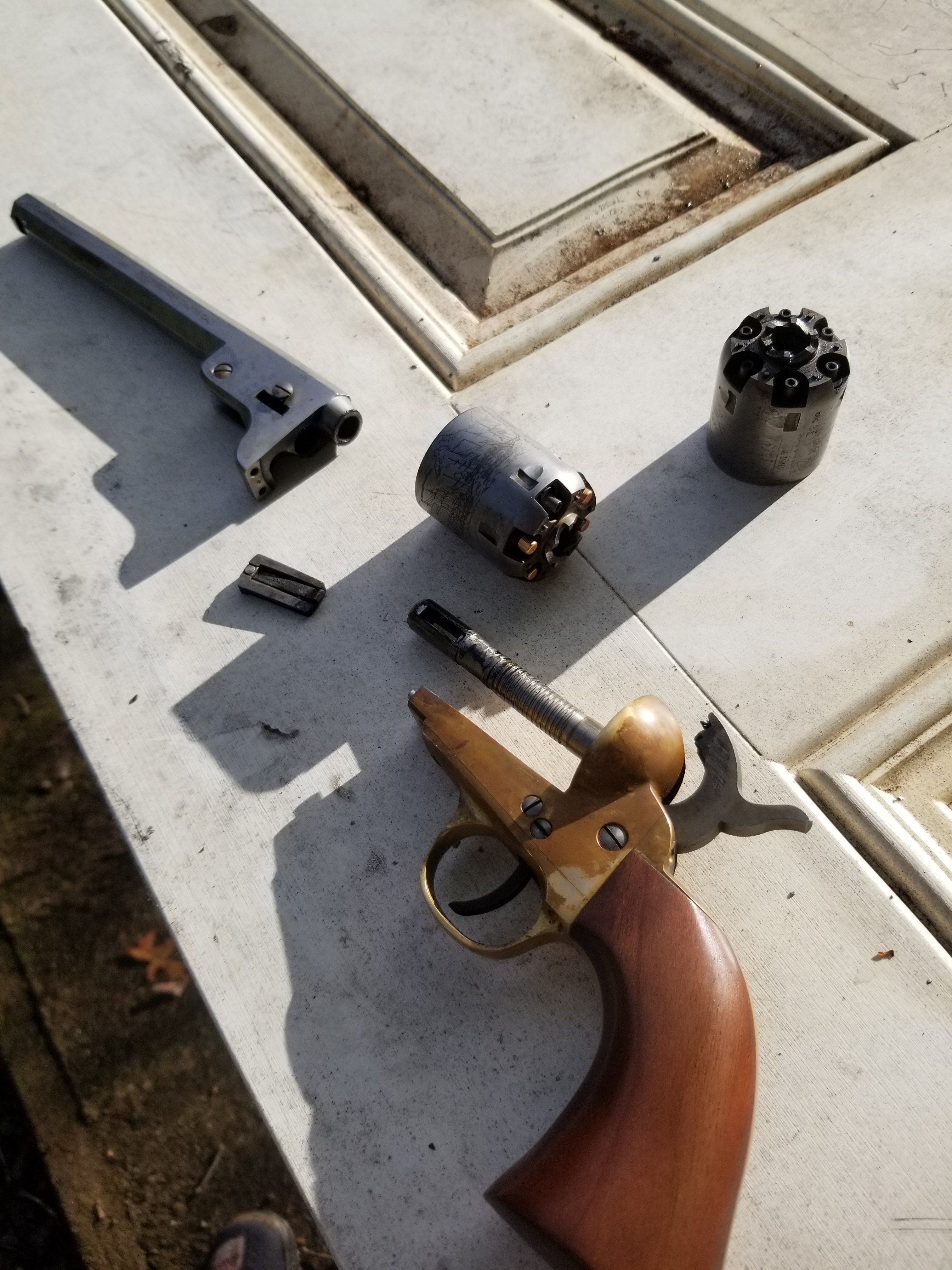 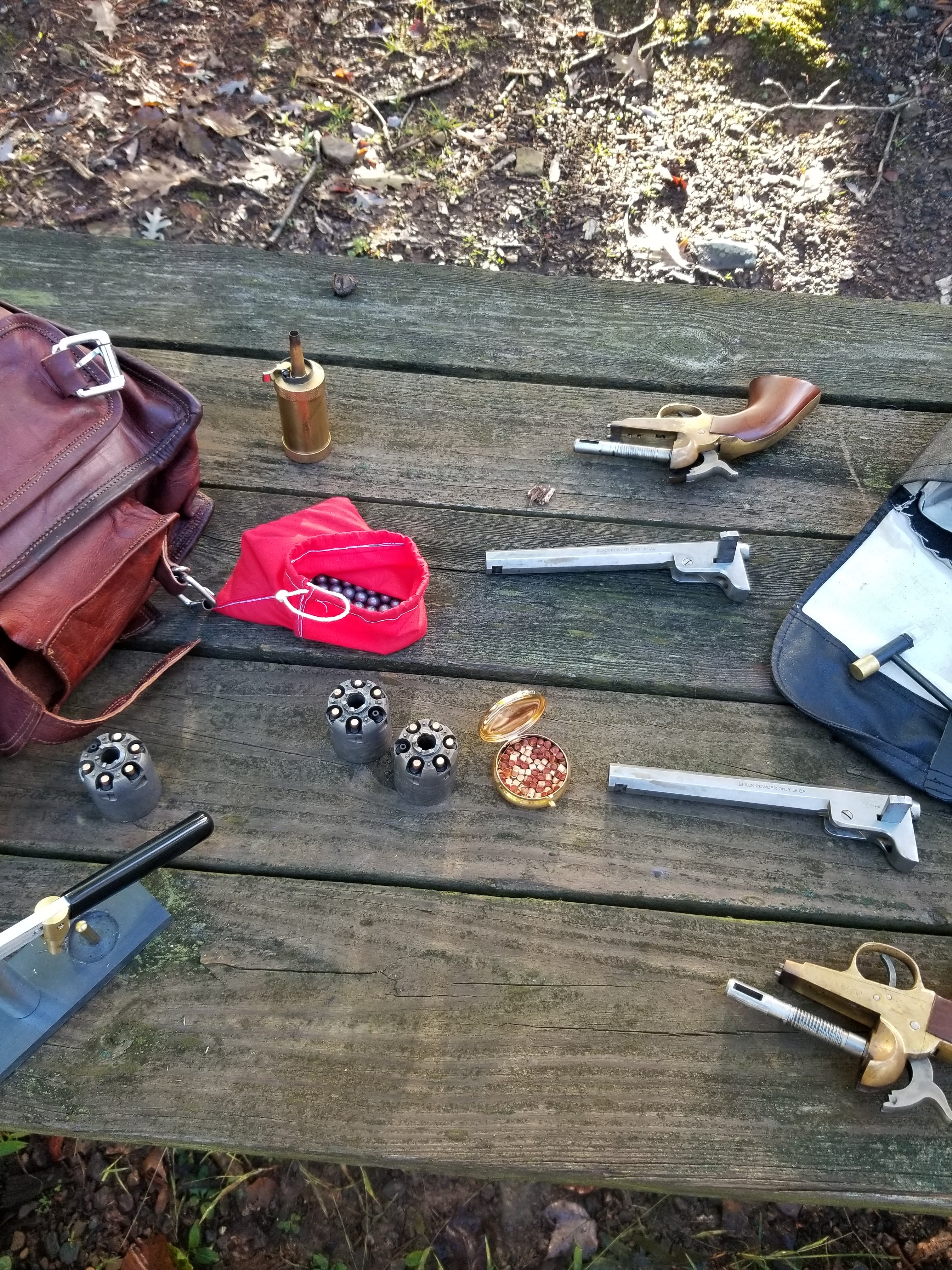 The range was set up for a Practical Handgun match so I did some "combat shooting " with the Schneider & Glassicks. They had no problem with "controlled pairs" from behind cover and it helped having 2 guns . I don't think they'd allow a pair of smoke wagons at an actual match though 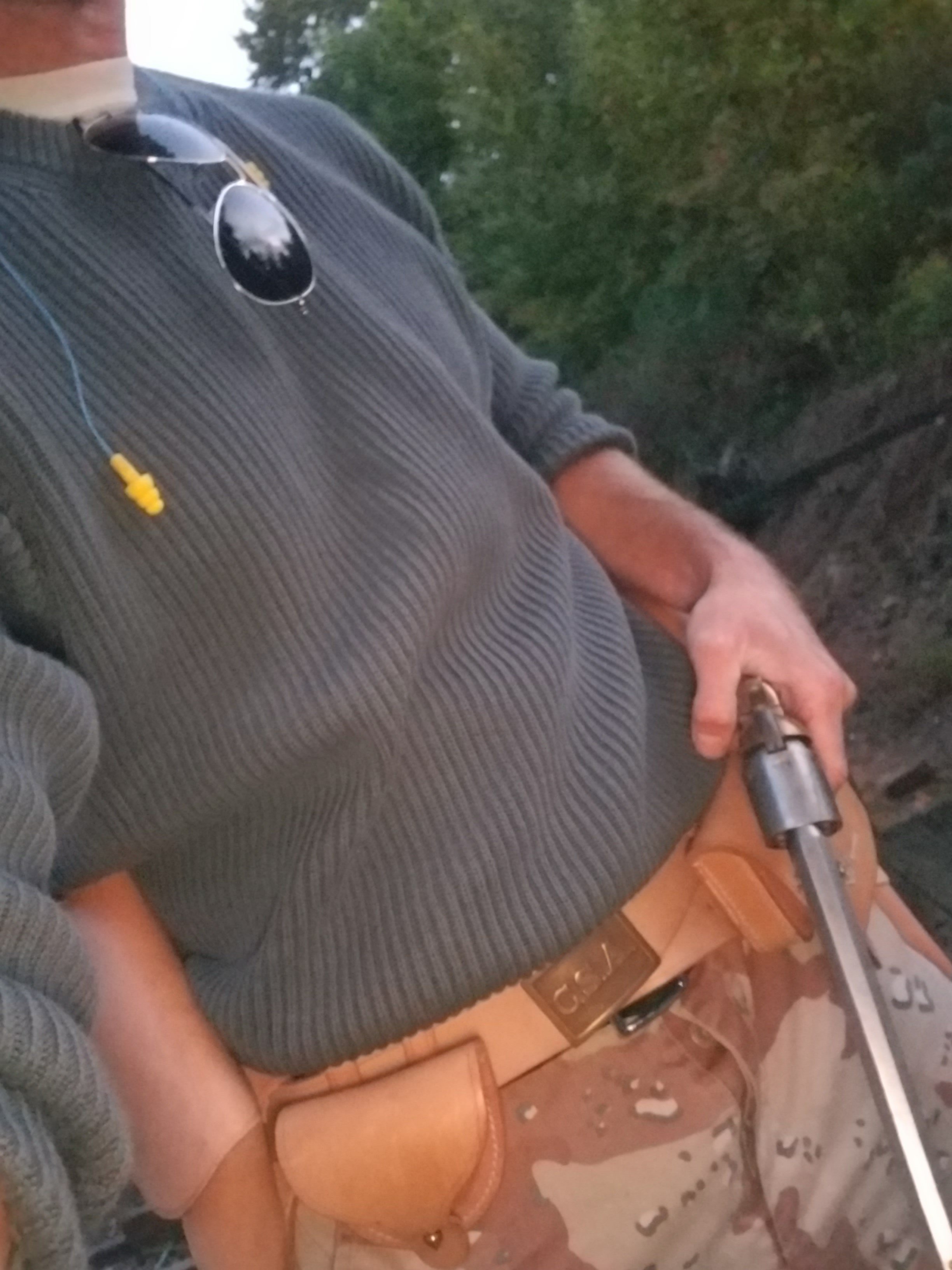 any praticular reason they are meant to shoot high or is it simply a design flaw in the short front sight...

thats silly. doubtfull that was the thought process in 1851. Much more likly thats just how it shot after they put the gun together...

nick_1 said:
thats silly. doubtfull that was the thought process in 1851. Much more likly thats just how it shot after they put the gun together...
Click to expand...

Original revolvers shoot high too. I suspect it was so that hits on vertical targets like enemy soldiers are likely at any range from handshake to a hundred yard. Put the front sight on the belly and you will hit roughly center mass. Colt and Remington certainly had the tech knowledge to build revolvers that hit point of aim at 25 yards but they didn’t do it.

the remington front sight is taller. I havent had a standard model since I was a kid but remeber that one shot just fine. I mostly point shot my 51 navys back then so don't remember haveing to deal with much kentucky windage. I bet it was partially just saveing money. that little bead was cheaper to instal than a blade front sight. i have yet to find anything official that the high point of aim was intentional. the only place I find that theory is on these forums which indicates to me that its just opinions??????
Last edited: Oct 9, 2022
4

Dang!! To heck with history!! If you don't think something makes sense, make it up!!

find me a credible source and I will believe it. genuinely interested in the correct answer.

nick_1 said:
find me a credible source and I will believe it. genuinely interested in the correct answer.
Click to expand...

I have no credible internet sources, just experience with original guns. Currently only own one 58 Remington that has been in the family for years. I have found it to shoot dead on at about 65 yards, obviously higher at closer distances. Very similar to other original revolvers I have owned and shot.

Please tell us about your experience with originals.

Nice pistol! it just seems that if this is intentional and not just urban myth as a result of poor sights then there would be some literature on the subject? is there an army training manual from the era?

Maybe the Old Timers were better shooter than us new people. Bill Hickock was said to have shot a man at 75 paces, in the heart in Springfield Missouri, with a 36 Navy

nick_1 said:
Nice pistol! it just seems that if this is intentional and not just urban myth as a result of poor sights then there would be some literature on the subject? is there an army training manual from the era?
Click to expand...

My grandfathers 1860 Army hits almost a foot high at 25 yards. It’s completely original. It’s been said that original specifications from the War Department called for a 50 or variously a 75 yard zero but I’ve never seen it in writing. If I were carrying one into battle, I’d be perfectly happy with that zero. “Can’t hurt ’em if you don’t hit ‘em” and holding center mass makes hits from zero to 75 yards very easy.
D

If it's got a 25 yard zero, then anything farther requires aiming high. I think it's harder judging the height with the barrel obscuring the view.
M

nick_1 said:
any praticular reason they are meant to shoot high or is it simply a design flaw in the short front sight...
Click to expand...

I don't know the historical reasoning for it but it is for sure that they will shoot high at 25 yards. I have always been told that you were supposed to aim for a man's belt buckle and you will hit in in the chest or lower depending on range.

Every single one of my reproduction revolvers shoots about 8" high or more at 25 yards off a bench. N-SSA competition shooters almost always have to replace the front sight with a taller one to get them to shoot to point of aim at 25 yards. I have one exception - a 2018 manufacture Pietta 1851 Navy which shoots point of aim off a bench at 25 yards.

wasent meaning to doubt you guys just trying to find out if anyone had a link to an army specifications or training manuel, or anything from one of the manufacturers.. I know Colt had a fire..
S

Pietta has apparently "fixed" the issue since 99.999% of these guns are used to punch paper and not shoot at Hostiles or enemy soldiers.....

Colt designed these guns with a 100 yard zero because they were made for shooting people, not paper targets. The Colt Paterson and later the Walker were primarily used by Rangers to fight Indians, the Walker used to fight Mexicans. Like was said, you aimed at the belt to hit from 0 to 100. A hit was a hit.

Today's consumer doesn't need a 100 yard zero, they just want to pop beer cans or targets they got at WalMart. Thank You Pietta for finally, after 60 years, making the front sights on the Navy revolver higher so we don't have to aim a foot low.

Rifle Muskets hit high too, by design. The 100 yard leaf on a 61 Springfield was not 100 yards to a Bullseye but 100 yards to an enemy soldier. Men were trained to hold at the waist of the enemy so that variance in range would still result in a hit.

Stantheman86 said:
Thank You Pietta for finally, after 60 years, making the front sights on the Navy revolver higher so we don't have to aim a foot low.
Click to expand...

Stantheman86 said:
Rifle Muskets hit high too, by design. The 100 yard leaf on a 61 Springfield was not 100 yards to a Bullseye but 100 yards to an enemy soldier.
Click to expand...

Yup. According to Henry Heth's drill manual the 100 yard target was like 6 feet tall and 22" wide. As the range went farther out the width got progressively wider.
M

nick_1 said:
wasent meaning to doubt you guys just trying to find out if anyone had a link to an army specifications or training manuel, or anything from one of the manufacturers.. I know Colt had a fire..
Click to expand...

I think Elmer Kieth had that to say of percussion revolvers shooting high on purpose but don't have the exact quote reference right at hand. I'll do some research and see what I can find on this. He actually knew and spent time with living Civil war cavalry veterans that taught him a lot about their use.
I always replace the front sight blade to hit center with a six o'clock hold on a 25 yard bull. This is best done by cutting a dovetail in lieu of the original barrel sight cut or hole,. then one has some windage adjustment without bending the front blade, holding Kentucky or turning past TDC on solid frame guns.
Also an early bolt drop is no problem if the bolt itself is polished on it's dome and has all the corners dressed,. It actually has a benefit in bleeding off (reducing) cylinder inertia by the braking action of the spring tension on it riding the cylinder circumference before it drops into the lead cut and the stop knock. If it's dressed properly as Kuanhuasen teaches it will make a rub line but will not gall the cylinder. Actually all bolts noses , single or double action, need to be dressed in this manor for smoothest performance.
Last edited: Oct 11, 2022
4

Well there is a proper timing sequence ( by design) and unsightly "Beauty rings" are pretty much relegated to the Ruger NM SA revolvers and the variants. The bolt only needs 3-4 lb pressure to operate correctly. The hand is the primary "braking force" for cyl lockup and that is the inherent problem with the Ruger action. The spring and plunger for the pawl ( hand) is too weak to begin with and with it's stationary position in the frame, it looses mechanical advantage as the cycle continues. The "braking " effect is at its least when it is needed the most.
The hand spring in the Colt action is carried with the hand and is progressively compressed as the cycle progresses . . . which delivers maximum braking force when it is needed most. This is also why the (reproductions) hand springs break frequently.
So, what to do ??? Jim Martin ( my mentor) is against the "Ruger" hand spring conversion for Colt actions because of the introduction of "throw-by " problems that come with it ( only do that for competition guns Mike, they're not concerned about looks!). So, my customers want the "coil and plunger" - I just needed one that would actually work!!! My answer was a larger Dia. pin that is also longer ( to combat linear binding) with a shorter/stouter spring. I call it a "spring and pushrod" (influenced by my auto mechanic background). Anyway, it doesn't allow the "Gee whizz" cylinder spinning in half cock but it does exactly what it's supposed to do and doesn't break!! In competition ROA's, it takes away the "Ruger runaround" !! Lol

Pietta out of the box shooters?