Hi Folks,
This project began with a phone call from Dave Keck. He said he spoke with a young man, Josh Tabor, from Vermont who was blind but was wanting to build a rifle and called him about a stock, barrel, and parts. Dave understood clearly that there were some issues involved and the caller was a bit confused about the building process and long rifles. He called me and asked if I could help Josh out because he was not sure he was able to do that very well. I do what I can to take care of my Vermont family so I contacted Josh. Josh was blinded and hearing impaired by disease when he was very young. He grew up in a farming family and has had a rough time because services for people with disabilities in rural America is pretty limited. He loves historical re-enacting but that community was lukewarm to him because of his blindness. He competed in primitive winter biathlons and woods walks in Vermont and harvested turkeys with a muzzleloader. He dreamed about building and owning a long rifle. I found Josh to be smart and able and decided to help him build a long rifle, which he will use in woods walks and hunts. Josh and I have no illusions about the gun building process. There are many steps that he cannot do but there are also many that he can, and I am committed to discovering just how much he can do. So we have started building a long rifle. He had an older Getz barrel, 54 cal, 38" long, swamped that was probably made for the early Haines kits. It was given to him by a friend. I had an older Siler lock that needed some upgrading, and bought parts to make it into a really first class lock. A local muzzleloading store owner had a good curly maple stock blank, which he sold for to Josh for a very small sum. The up shot is we are on our way. Dave Keck did an expert job inletting the barrel and drilling the ramrod hole. We designed a nice early Lancaster style gun and Josh is working with me to build it. Certainly, there are many tasks that I have to do but there are also many he can do and we are devising means for that to happen. Here are some early photos of Josh inletting the the bolster on the breech plug. One challenge was figuring out a way for him to hold the chisel perfectly vertical. He had a natural tendency to angle the chisel away from him. So we developed a rule that said place the chisel at the angle you think is vertical and then rock it back toward yourself a little. It worked. He got the bolster inlet quickly with minimal guidance. When he correctly flicked out the first chip of wood from the mortice, he smiled like a man really happy. With some guidance he inlet the barrel tang. There are a few little gaps but he did very well. 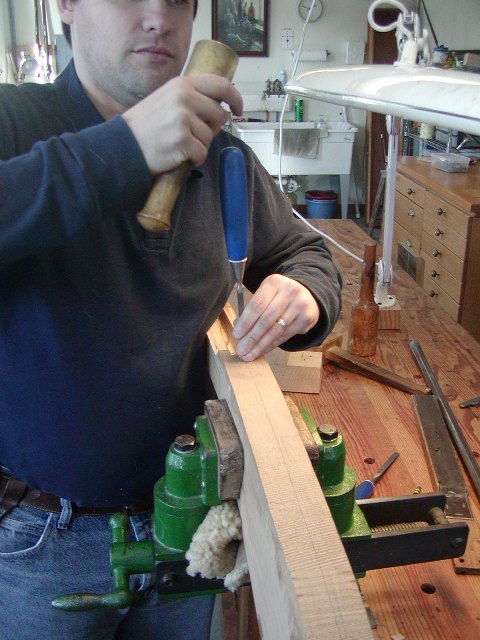 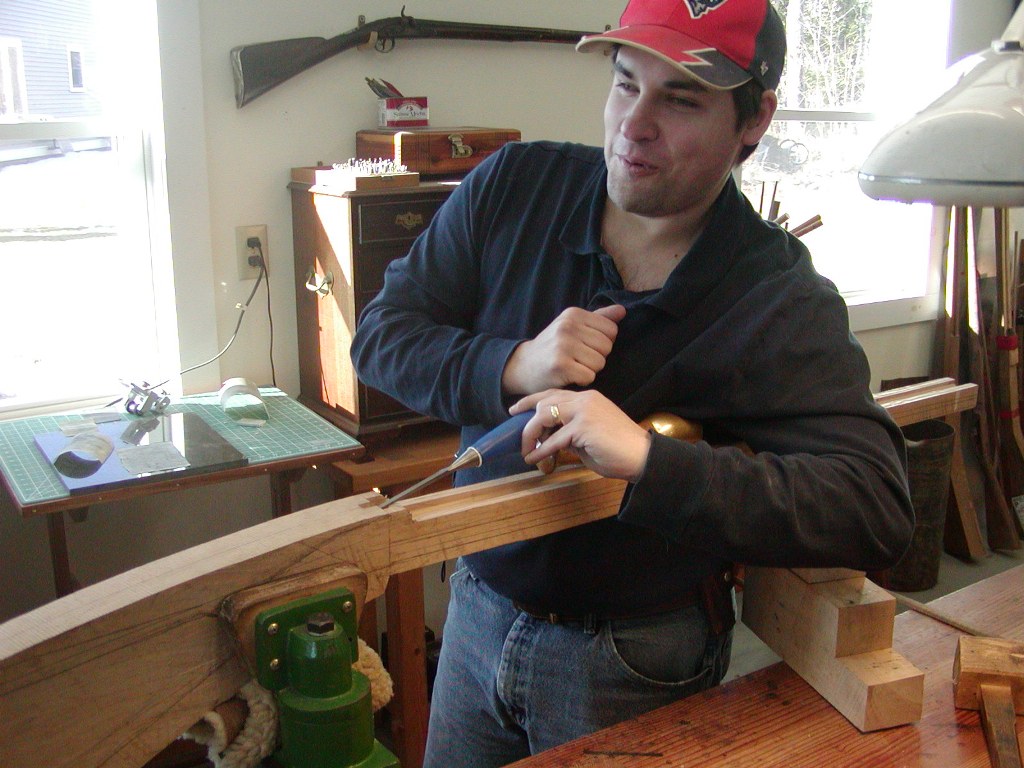 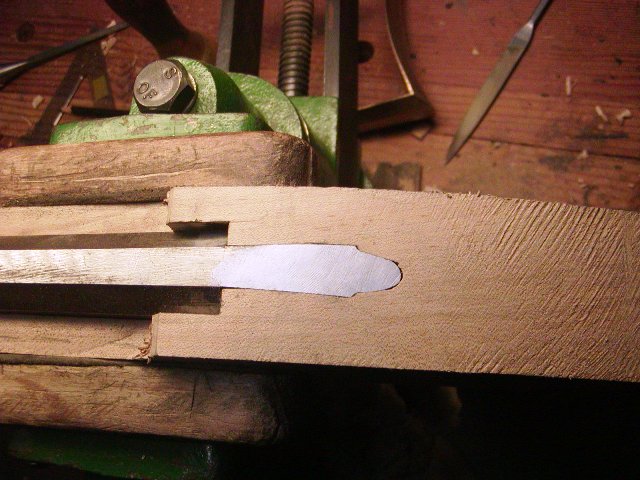 This is going to be a thread to watch. Good for all of you!
There is no greater gift to yourself than the gift of time you give to others.
PLEASE keep the pictures coming so we can watch this exciting story unfold.

Inspirational. If he can compete in biathlons, woods walks, and hunt turkeys, I say go for it.
K

Nice work Josh and great of you to take this on Dave.
D

What a great story and idea ! This is worth following.
P

Way to go Josh! And also Dave. I’m watching this one with great interest.

Wow. Very good of you to embark on this endeavor. And absolutely wonderful for him to do so, inspiring.

We all know that he couldn't have a better mentor and teacher! Congrats to both of you and I look forward to reading about the progress.

Is Josh totally blind or legally blind? I went to college with a gentleman who was legally blind since his teens from some disease in his retinas. He could at least see shadows and if the print was big enough could read if very close. Since his major was my minor we had many classes together and I took notes for him. Other than seeing clearly that guy could do as much or more than most people. He ended up being a very successful Financial consultant. Good to see Josh isn't letting his disabililty stop him from doing what he loves.

Good for the both of you!
C

I love this story and look forward to his progress.
Growing up our local bicycle repair man was blind (fixed my bike more than once), so was the local saw sharpener, he could sharpen everything from chainsaws to hand saws. Both guys did great work.

For me, this thread is a great start to the holiday season. You said Dave @dave_person "...I do what I can to take care of my Vermont family." For many persons, the season is a special reminder how important it is to enjoy family & friends, and honor them by spending time together. Not only during Nov-Dec holidays but all the time.

The upcoming time spent with Josh who is a part of your Vermont "family" will bring encouragement to all who follow your work together in this special build. And Josh's determination to keep-on-keeping-on is also mighty encouraging. The candle is lit and you are both in that gentle brightness. Many will be eagerly watching...I for one.

Well done. It’s good to hear a story like this. I’m sure that, with your help, it will turn out to be a fine gun.

Dave, your kindness will be rewarded back to you tenfold.
Young man sounds like a fighter. Best of luck on this build.
Makes me feel shame on myself for all the cussing I did on my first build this year.

What an awesome gift to that young man. Your time, patience, and expertise is worth more than all the monetary gifts one could offer. By the way, I'm not sure I could have done any better on that tang inlet and I still see pretty well. Good for you and good for him for wanting to try.

Hi Folks,
Josh was able to get a ride over the mountains yesterday and work in my shop. As planned, I picked him up halfway. I wanted Josh to disassemble and reassemble a flintlock by himself. A few days ago, I blindfolded myself and attempted the task and it went very smoothly. In the process, I figured out some tricks that should help him. I originally donated an old Siler lock to the project but that lock really needed some work and I just did not feel like working it over right now. I had a Dale Johnson lock lying around and it fit so nicely in my drawings of Josh's rifle, that I decided to donate it to the project. I had Josh take it apart, however in the process, I realized he has never seen a flintlock. My blindfolded practice was easy because I could envision every component of the lock. He cannot. So I had to teach him to feel every part and understand its function. For example, during assembly, which screws go where is a problem for him. Fortunately, on this lock, all the screws are a little different in length and head size. So he had to learn those differences by feel. It took time, but Josh mastered it, even the fly. He works low over a tray so any dropped parts don't get lost. A big shout out to Tom Curran's spring vise. It was a huge benefit to Josh. 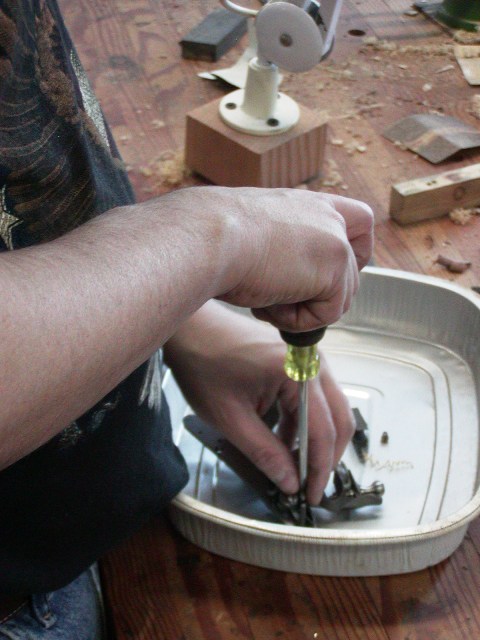 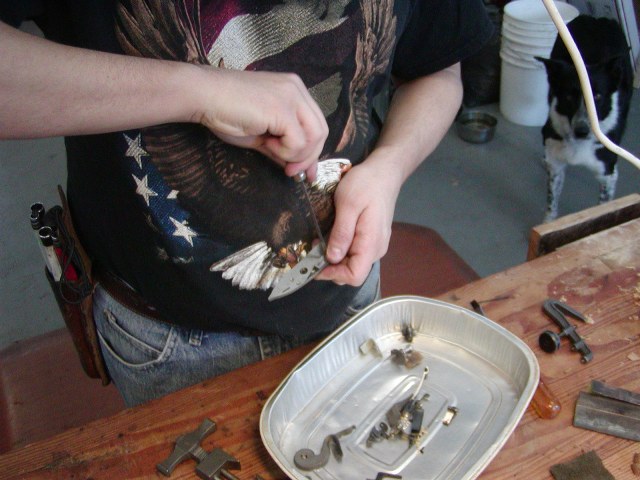 I taught Josh how to use files. I had an idea that his body position relative to the work would affect his ability to file level or at a consistent angle. I was right in this and we worked on him finding the right body position to do the job at hand. This is a major break through because it means he can file confidently. I had him file the draft on the edges of the lock plate. 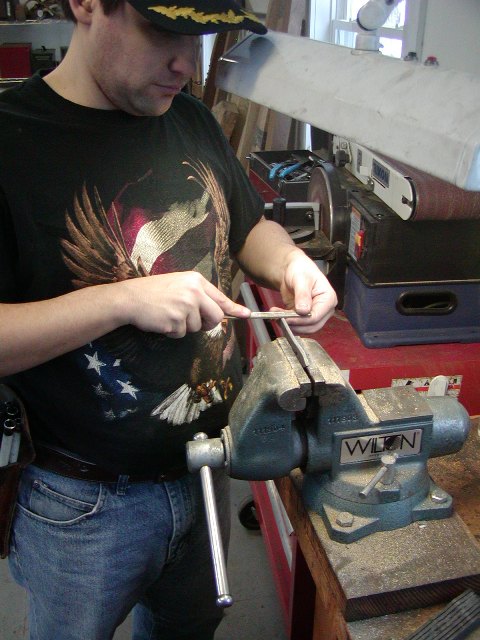 Next, I had him practice inletting a lock plate. We tried several methods. First I cut a deep tracing of the lock on wood and he used the cut as a guide to stab in the outline. We also tried outlining the shape with tape the edge of which he can feel. Both methods worked up to a point but it was still hard for Josh to keep the chisel blade in the cut or flat against the edge of the tape. We will work on this but for now I opted for another method. I started the actual lock plate inlet, established the shoulder indicating the borders and he used that shoulder as a guide. He then deepened the inlet, back cut the borders and relieved the bottom of the mortice. I cleaned up and evened the bottom and the lock plate was in. I checked it with inletting black. 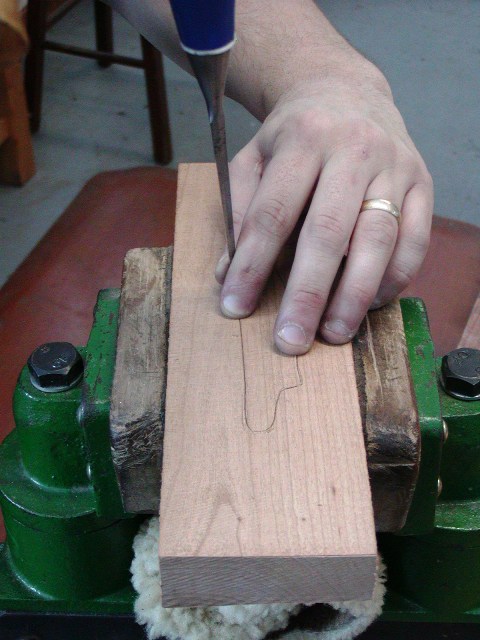 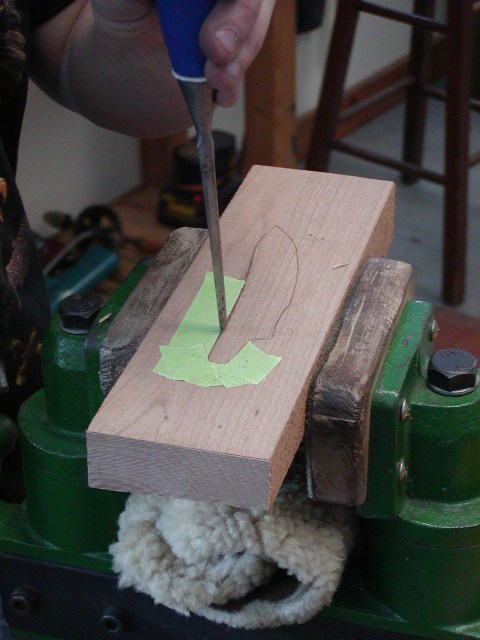 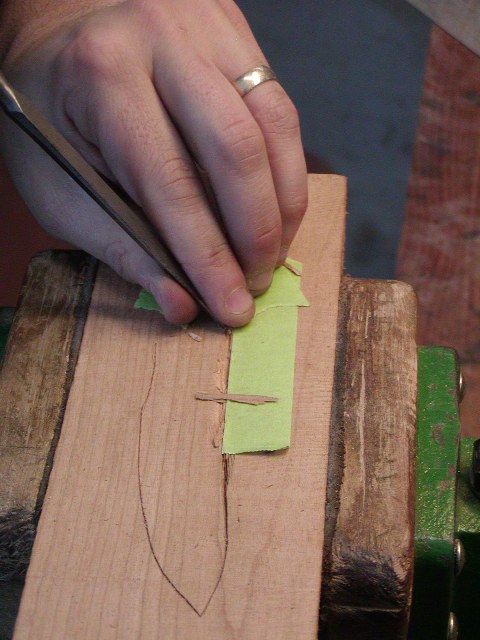 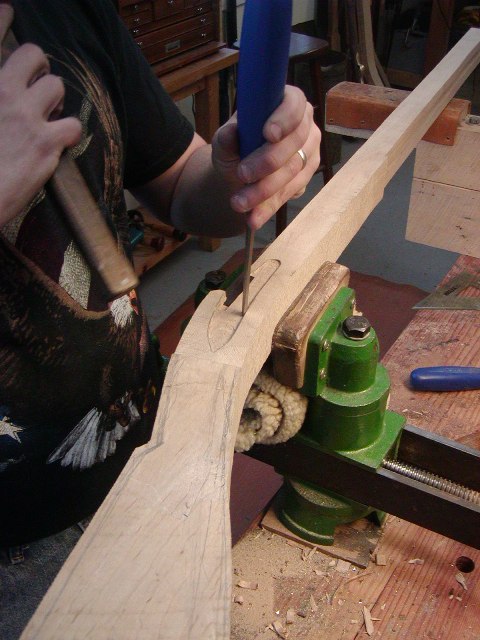 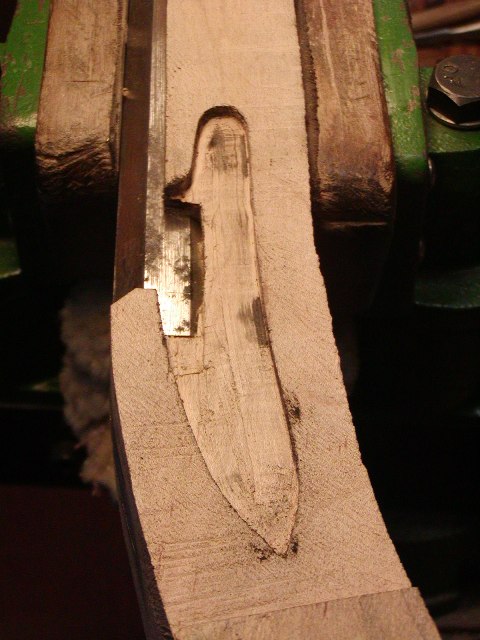 These photos also demonstrate the value of not having a lot of extra wood on the side of the stock when inletting the lock. There is no advantage in cutting a deep mortice and many disadvantages such as not seeing gaps forming and chipping out wood when you remove the plate. Josh and I joke a lot. At first I kept asking him if he had enough light. He woulds always say "no", could I adjust it better.
dave

dave_person said:
Hi Folks,
A few days ago, I blindfolded myself and attempted the task and it went very smoothly. ... I had a Dale Johnson lock lying around and it fit so nicely in my drawings of Josh's rifle, that I decided to donate it to the project. I had Josh take it apart, however in the process, I realized he has never seen a flintlock. My blindfolded practice was easy because I could envision every component of the lock. He cannot. So I had to teach him to feel every part and understand its function.

Great observation. Astonishing to realize what we see through already having seen it.

Josh and I joke a lot. At first I kept asking him if he had enough light. He woulds always say "no", could I adjust it better. dave

The "light" that shines through Josh's fingers is pretty astonishing,too. Sounds like you both are having a grand time. Glad to be watching... wiksmo
Click to expand...

Dave, your tutorial here has some insights (pardon the pun) for us sighted folks as well. I especially note your observation about body position effecting being able to file level. I suspect that is something all of us need to take into consideration. We may do it automatically, but need to be aware of it.
B