Hey guys, I'm going to go ahead and start a thread to document my first attempt at a flintlock pistol kit.
You guys have been kind and helpful to this newby so far and I appreciate it. Hopefully this kit will turn out like I imagined it would. Stay tuned and please offer some advice if you see me messing up. I bought the Pennsylvania Long Rifle book and I have been obsessively reading everything I can find and watching some great youtube guys as well. To say I'm obsessed right now is a bit of an understatement.

I got the kit from Muzzleloaders Building Supply a couple of weeks ago.
I have been cleaning up the metal and taking some measurements. I am also starting to inlet the barrel and lock and I have a question. Should I see inlet black all the way down evenly in the barrel channel?
It "looks" pretty good right now.
It is sitting where it needs to be and it feels solid. I'm afraid to just keep going. The web between the barrel channel and the ramrod channel is very thin.
I took a few pics of my progress so here they are.
If you see anything out of wack please let me know. 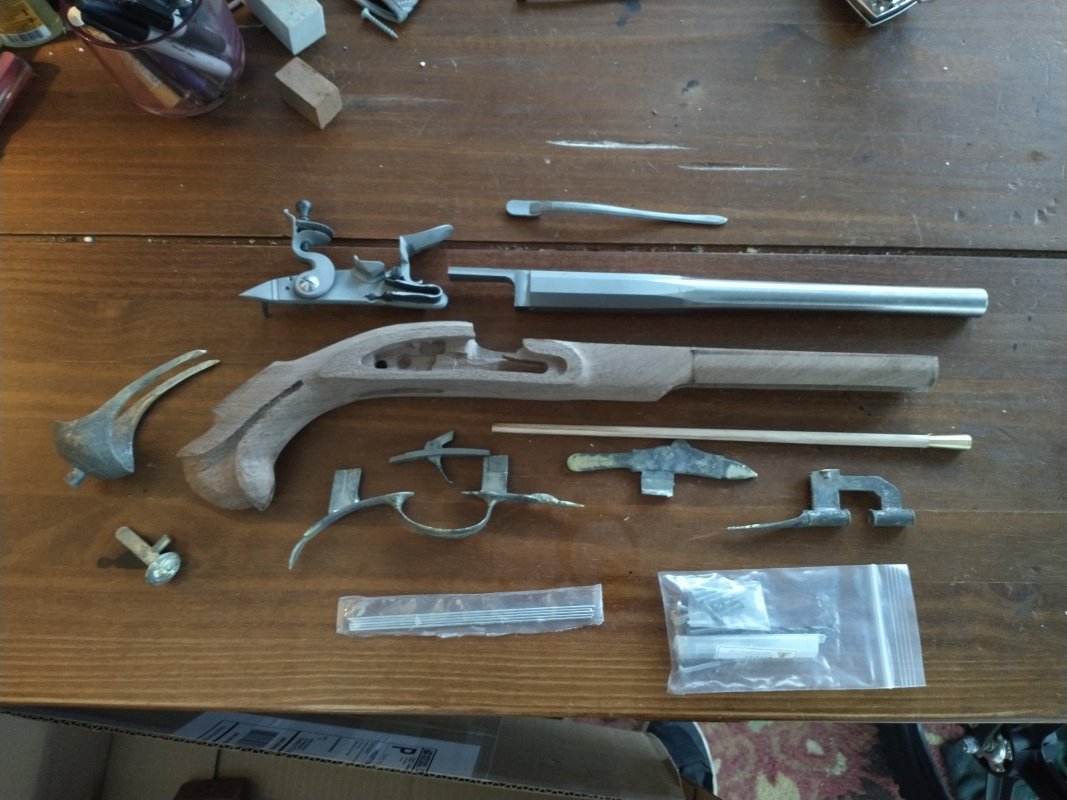 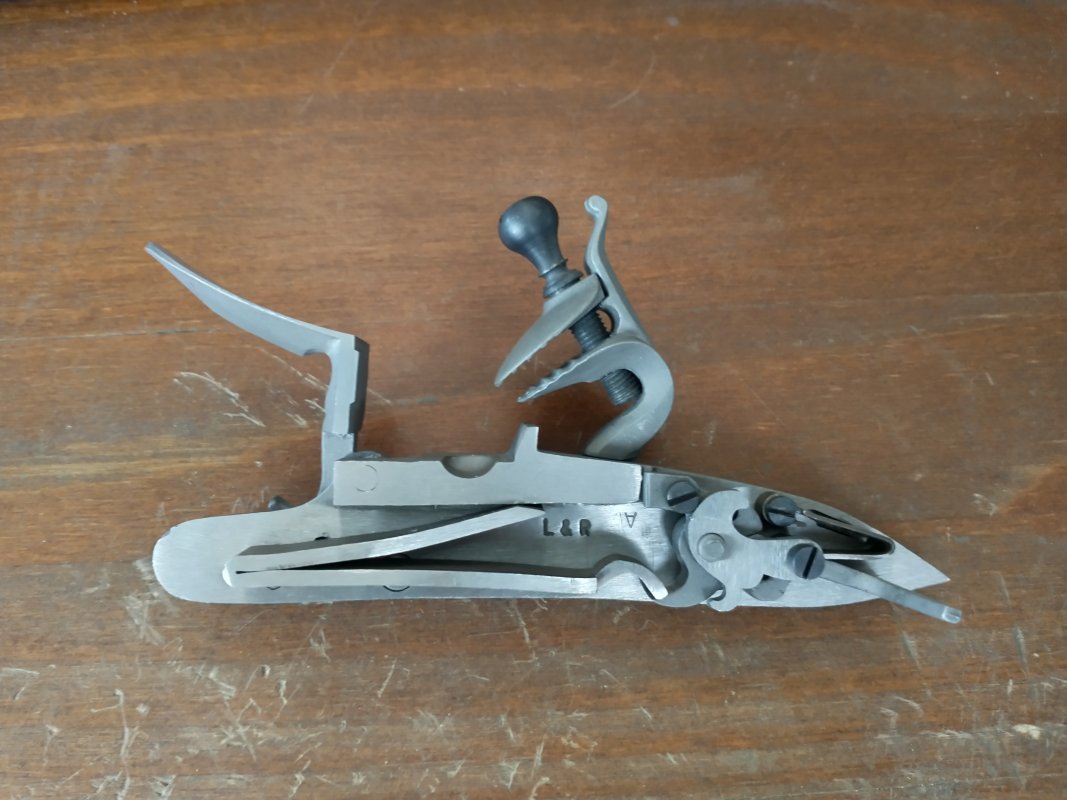 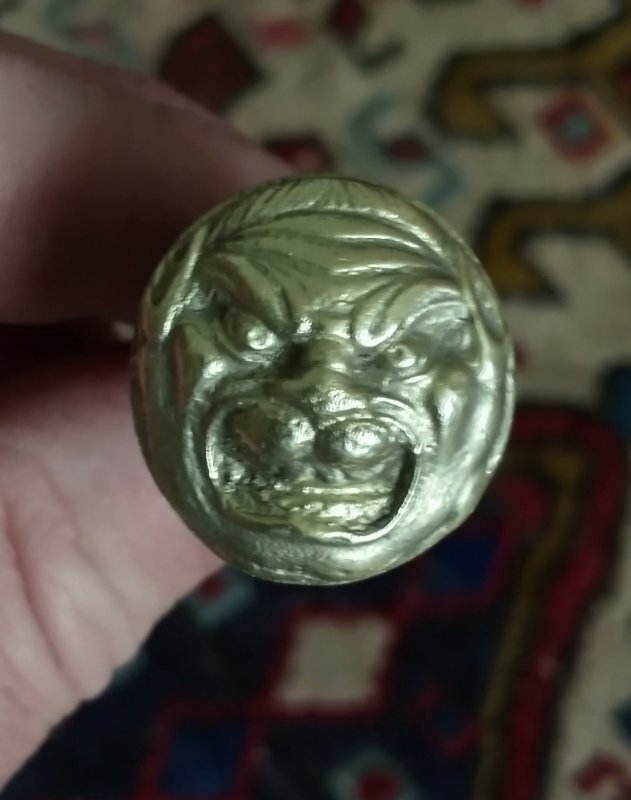 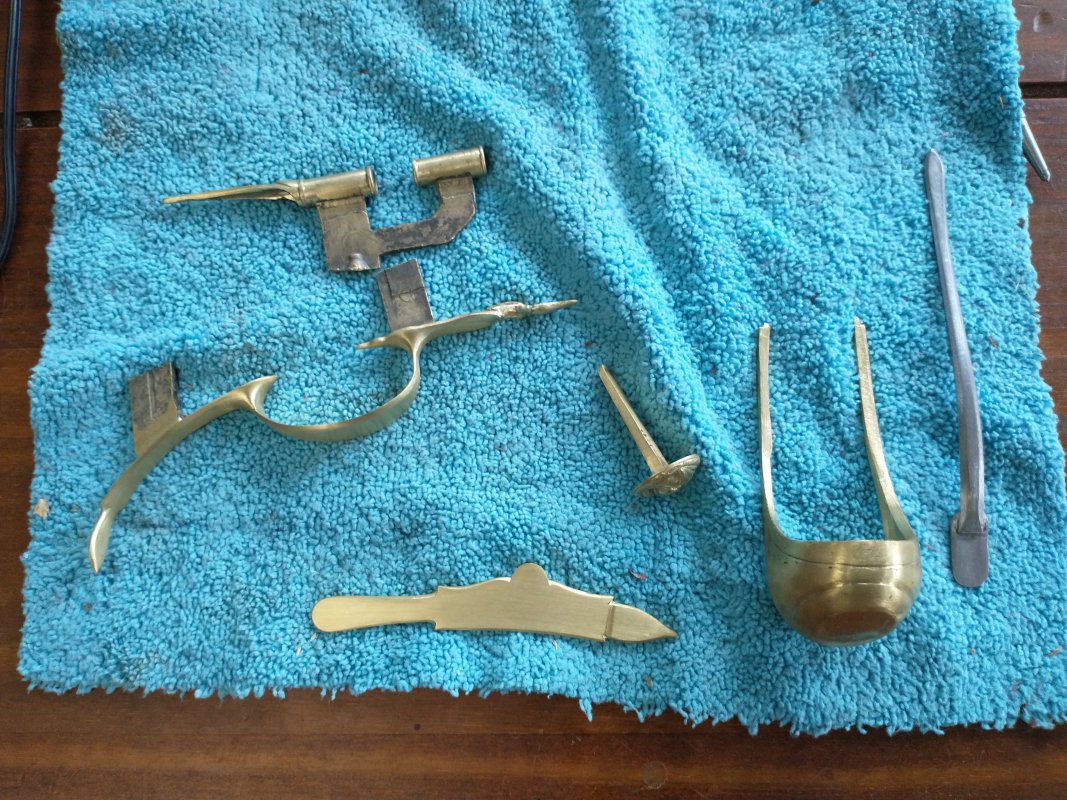 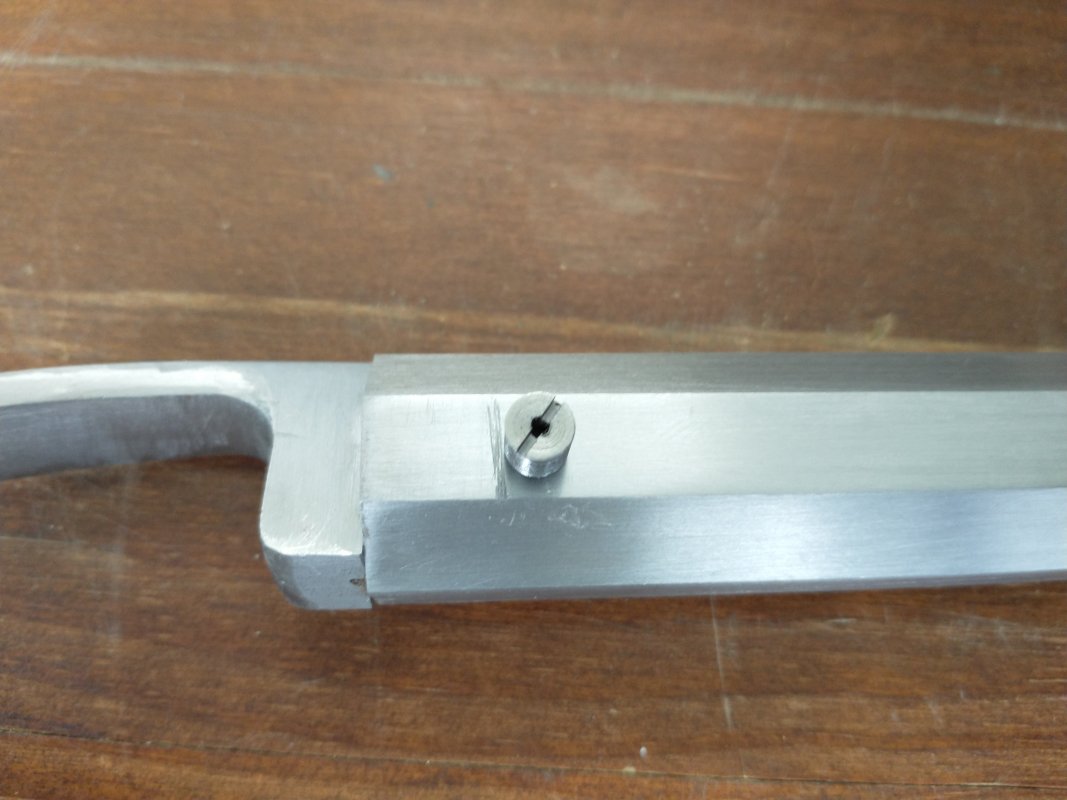 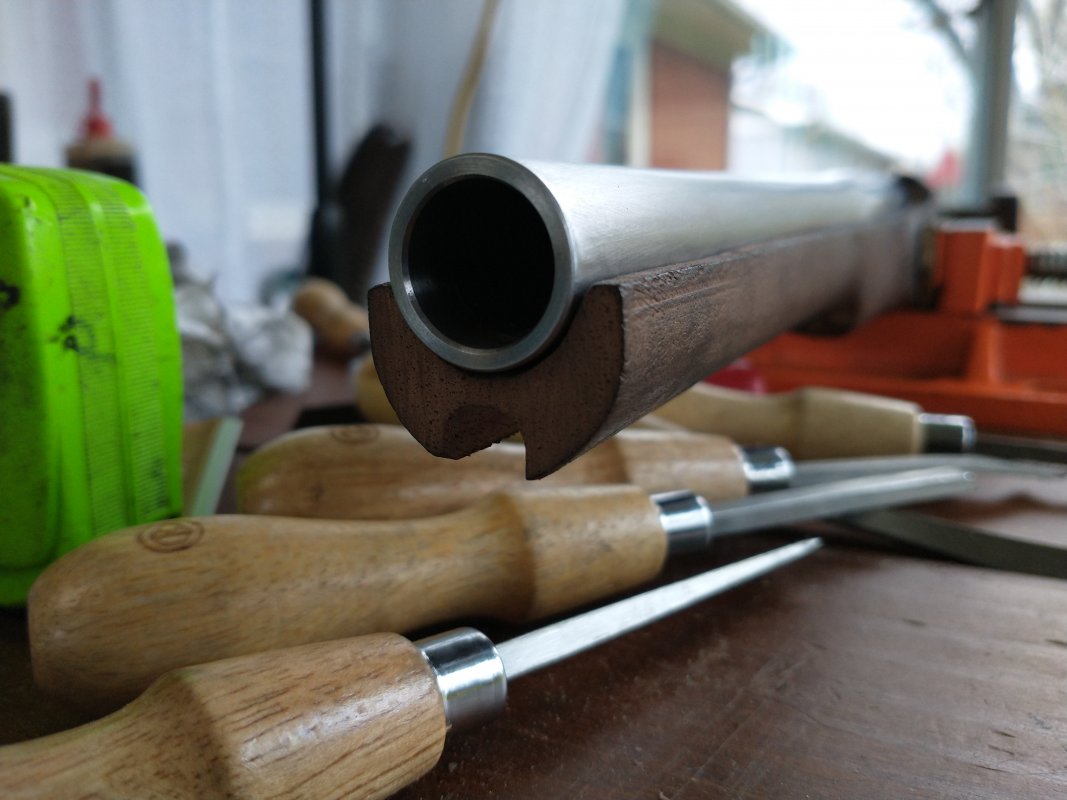 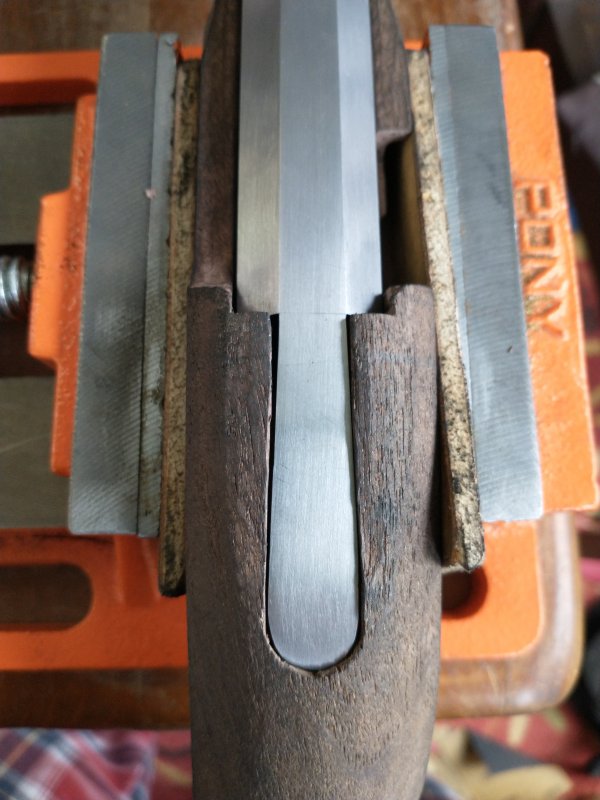 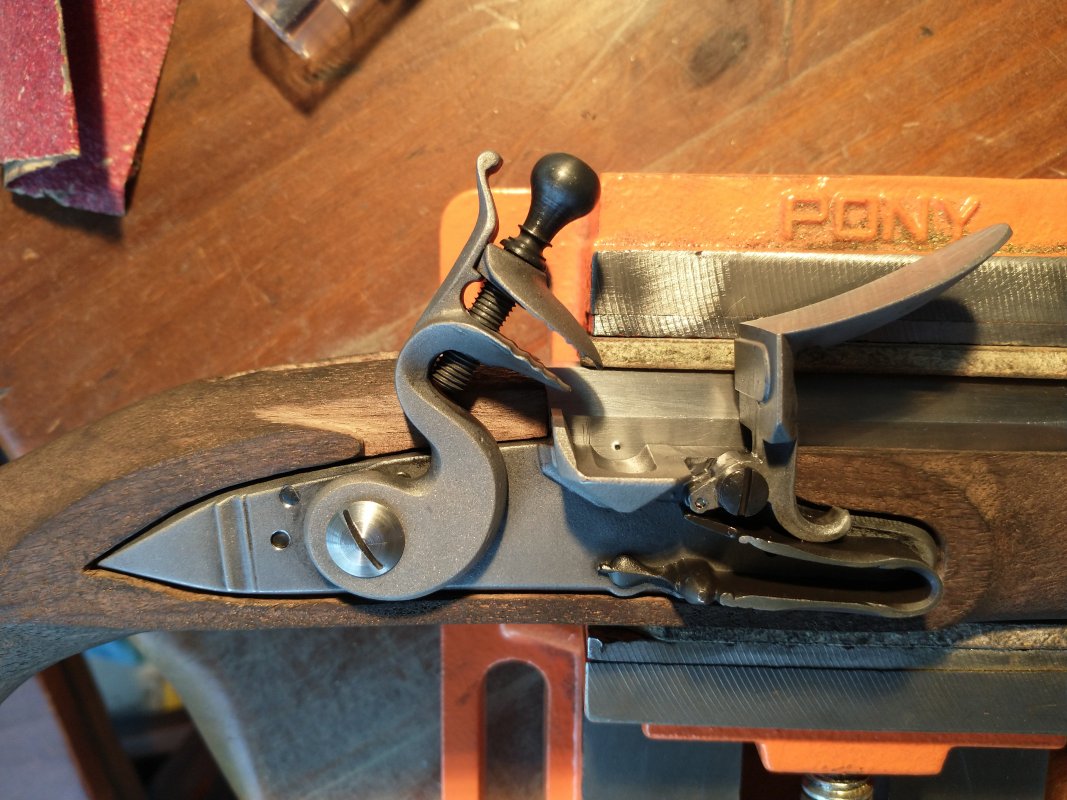 That looks like it’s going to be a fun build !

Thanks guys.
So far I'm having a lot of fun just learning what to do and what not to do.
It has definitely captured my interest and attention.
Just ask my girl. 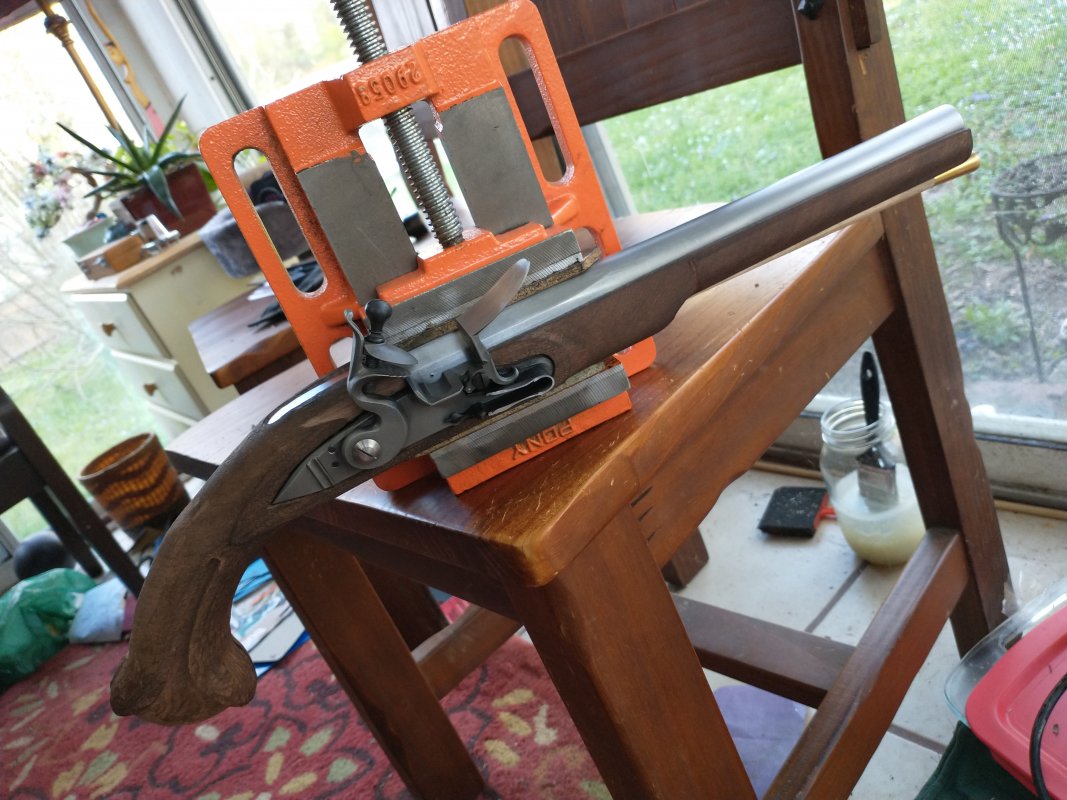 macr0w said:
Thanks guys.
So far I'm having a lot of fun just learning what to do and what not to do.
It has definitely captured my interest and attention.
Just ask my girl. View attachment 71400
Click to expand...

looking good, cant wait to here the rest of the story!!

Like Long John Silver said, 'Them that dies will be the lucky ones!'
M

Hey guys, should I file all the casting marks off of this thing and polish it up?
How much do you guys do? 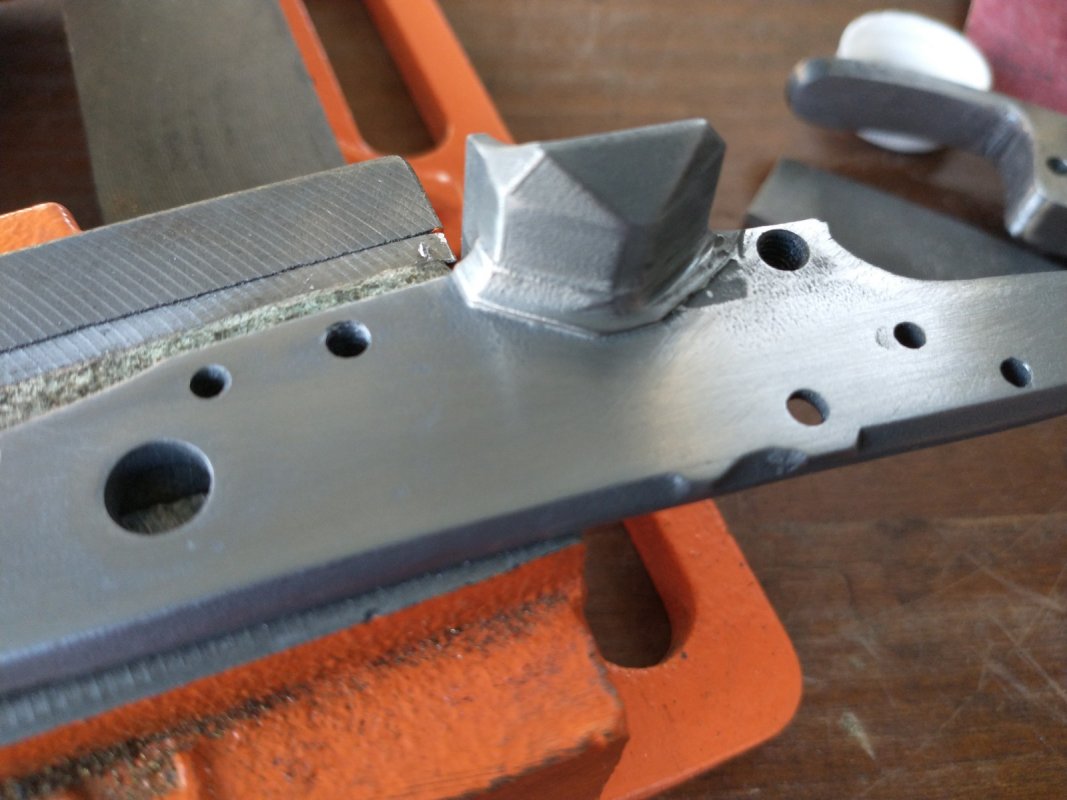 On another note I did get my lockplate and barrel tang drilled. 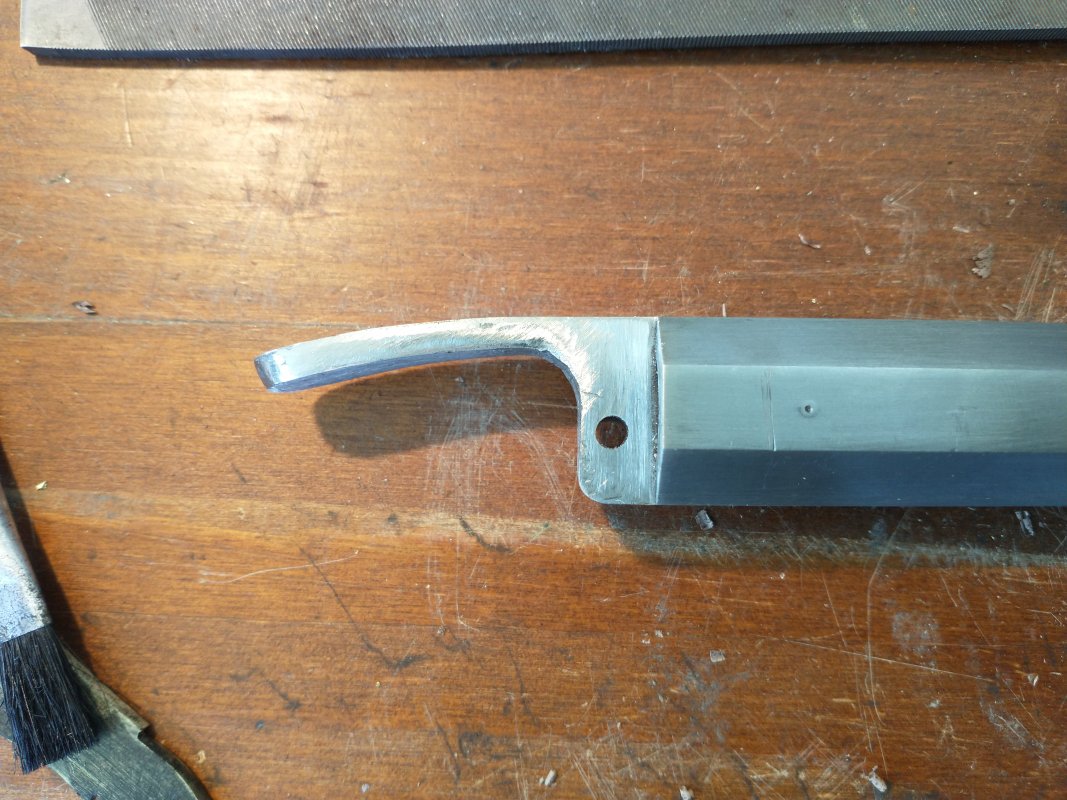 macr0w said:
Hey guys, should I file all the casting marks off of this thing and polish it up?
How much do you guys do?

Absolutely file and polish. Old locks were not cast, neither were they browned.

Yes. Polish everything that butts up against something else, and parts that move. Well polished surfaces resist rust better.

Hi,
Make sure the edge of the lock plate is flush with the wood not the top of the bevel and keep those flat areas around the lock and side plate very thin. For this gun no more than 1/8" wide. See photo below for an example (English rather than French). 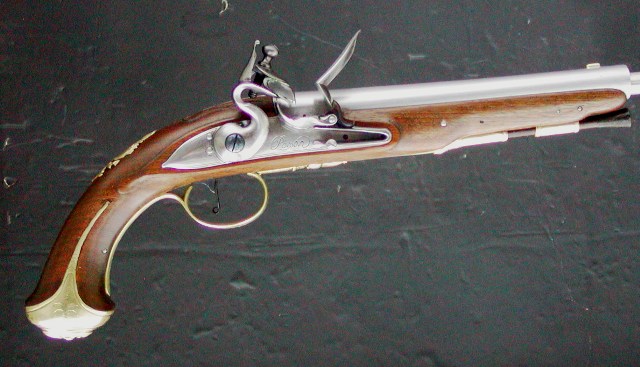 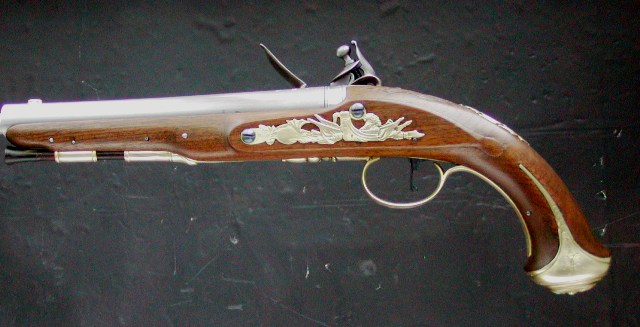 dave_person said:
Hi,
Make sure the edge of the lock plate is flush with the wood not the top of the bevel and keep those flat areas around the lock and side plate very thin. For this gun no more than 1/8" wide. See photo below for an example (English rather than French).

Yeah, I haven't started shaping the wood yet.
That one looks nice.
M 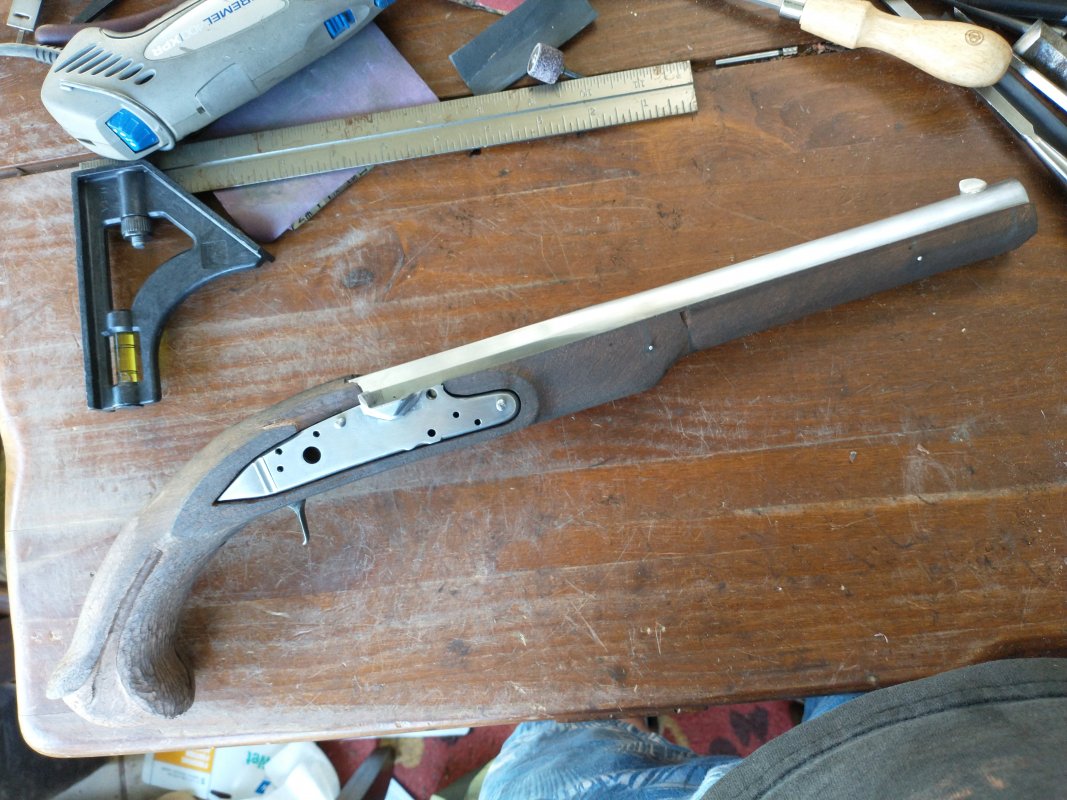 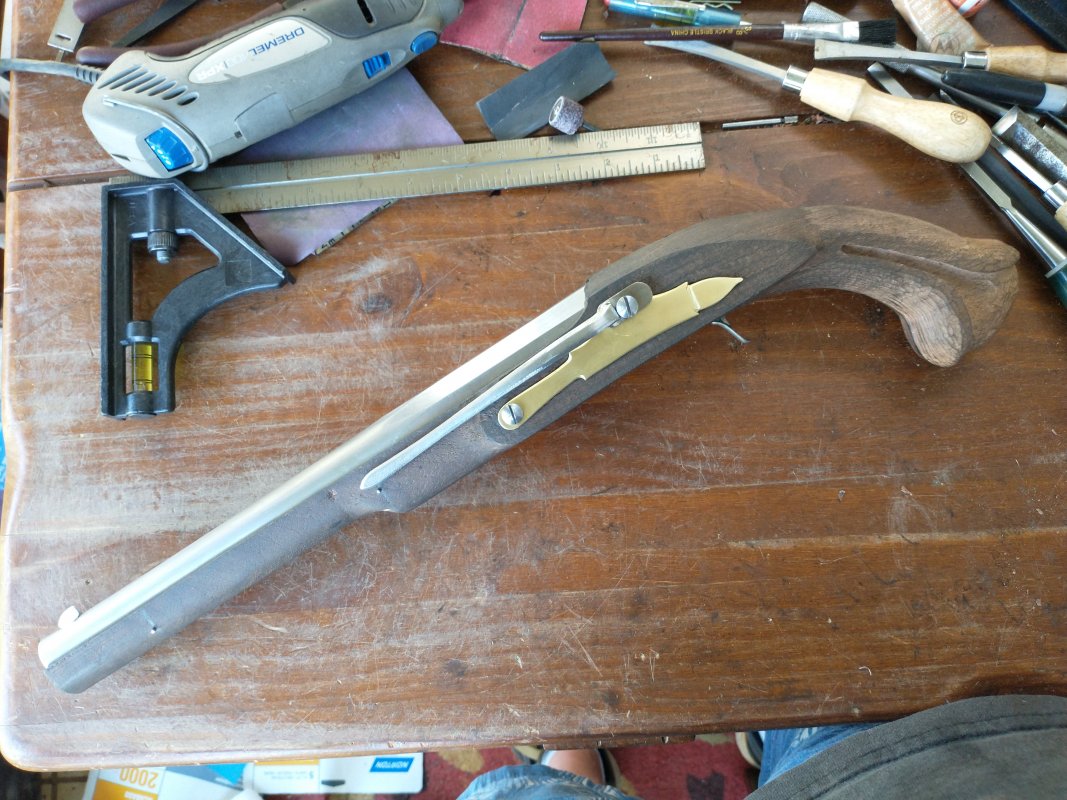 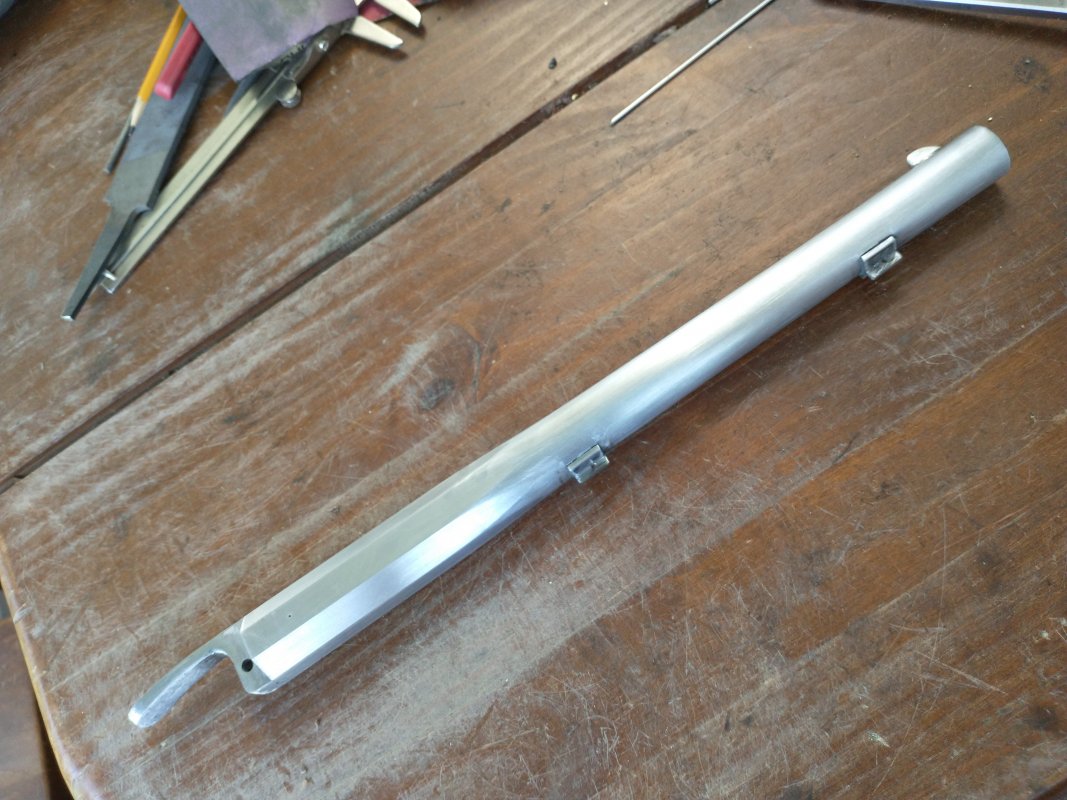 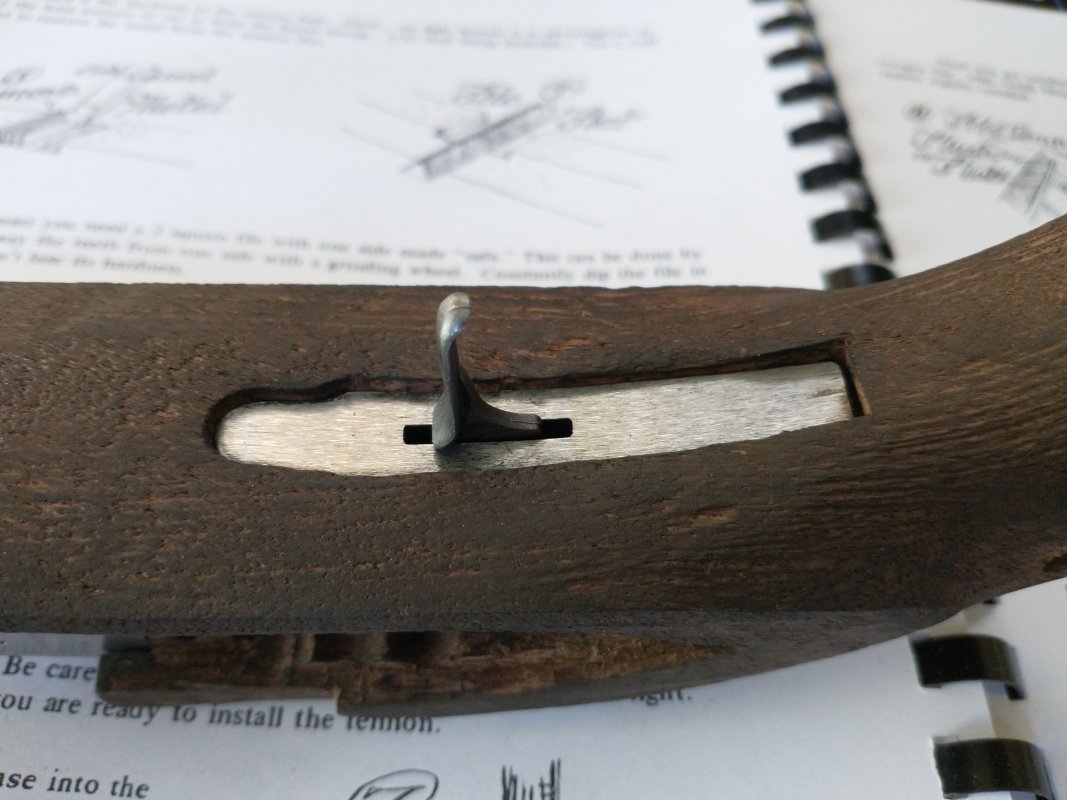 I actually inlet the side plate a little more than what's in this picture. I didn't take another one.
It's been a long day and my girl is about ready to kick my butt.
M

Quick question for everyone: Should the trigger guard be pinned or screwed in?
It comes with these big casting sprues. I could trim them down for pinning but there's not a lot of options for real estate on the lock side for the front of the guard.
I have been looking at some pics of real ones on the web and it seems like a mix.
Should I pin it through the lock plate? 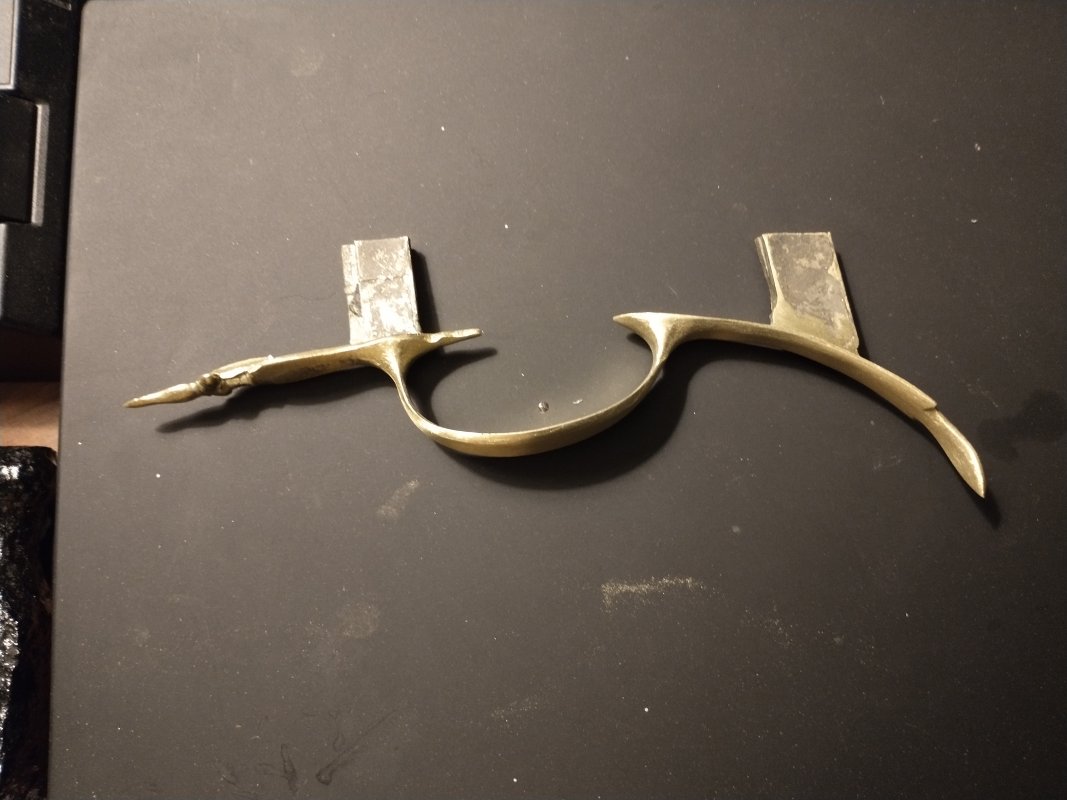 Hi,
The front should be pinned and then two screws hold the rear extension. Keep the front lug tall so your pin is hidden inside the lock mortice. Don't worry if it shows on the other side. You also will need to make sure there is room under the rear end of the guard for the screw that anchors the butt cap plate. It may be that the rear screw for the trigger guard doubles as the anchor for the butt cap end plate. Do not rely on any photos of India-made versions you find on the internet. Focus only on the originals.

Thanks Dave.
Yeah, I've been looking at museum pieces mainly.
I didn't realize that MOMA in NY has a beautiful gallery of guns online.

Hi,
MOMA and almost all museums of traditional arts have firearms collections because they exhibit some of the best decorative artistry ever produced. Staff at MOMA included great historians of firearms and their decoration such as Stuart Pyhrr and Stephen Granscay.

Some of the pieces I've looked at on moma and other sites are absolutely mind blowing.
The skill and the craftsmanship involved is unbelievable.
Truly unbelievable.

Hi,
During the late 16th century, firearms started to become the common gifts of male royalty and wealth. Previously, it was suits of armor, swords, and interestingly, portraits and frames. The trend shifted away from armor and swords to firearms. Each of those highly decorated European and British guns is the product of many tradesmen. There were the barrel makers, barrel polishers, barrel decorators, lock makers, lock polishers, lock decorators, rough stockers, stock decorators, stock finishers, engravers, bone carvers, etc. In the British trade the last tradesmen involved in the chain were the "setter uppers" sometimes referred to as "screwer uppers" (I am not joking).