Does anyone know of a buckhorn or semi buckhorn rear sight for a TC Hawken? One that will install the same way as the stock rear sight? I think the rear sight is mounted with screws and I removed it a while ago and have installed a TC peep at the tang, and even with opening up the aperture it is difficult to see through well in the woods when hunting. The standard TC rear sight is pretty sucky in my opinion, which is why I removed it in the first place

I have used this sight from the Gunworks. Here are some photographs of one mounted on a TC before I knocked off the ‘buckhorns’. 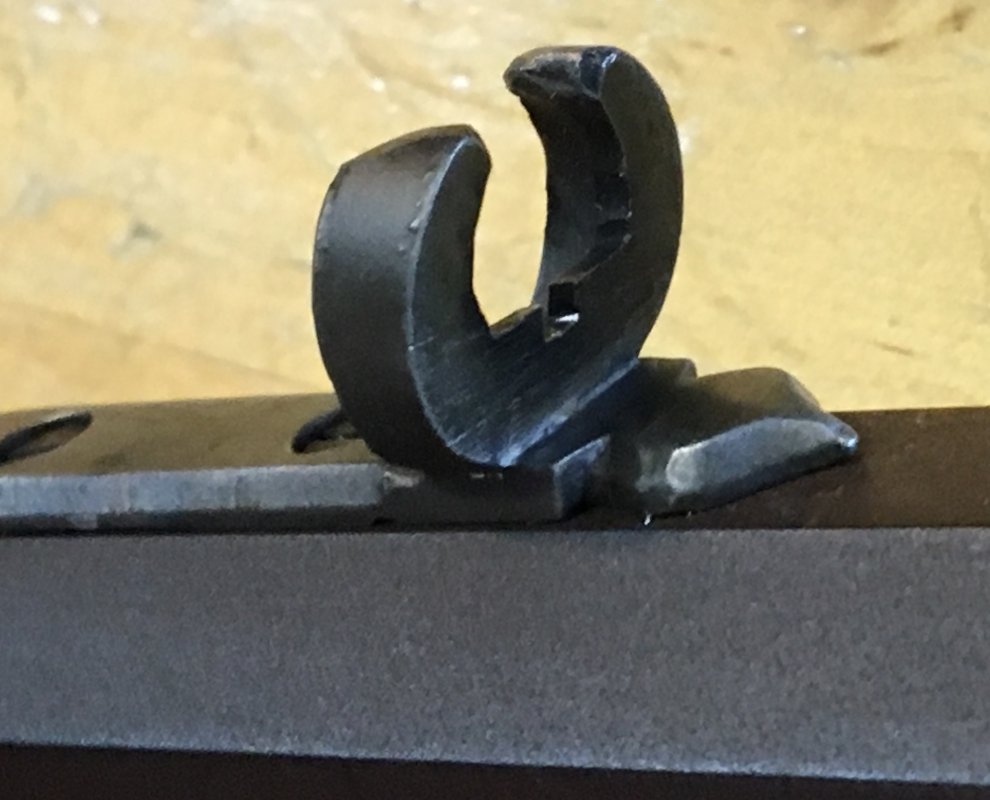 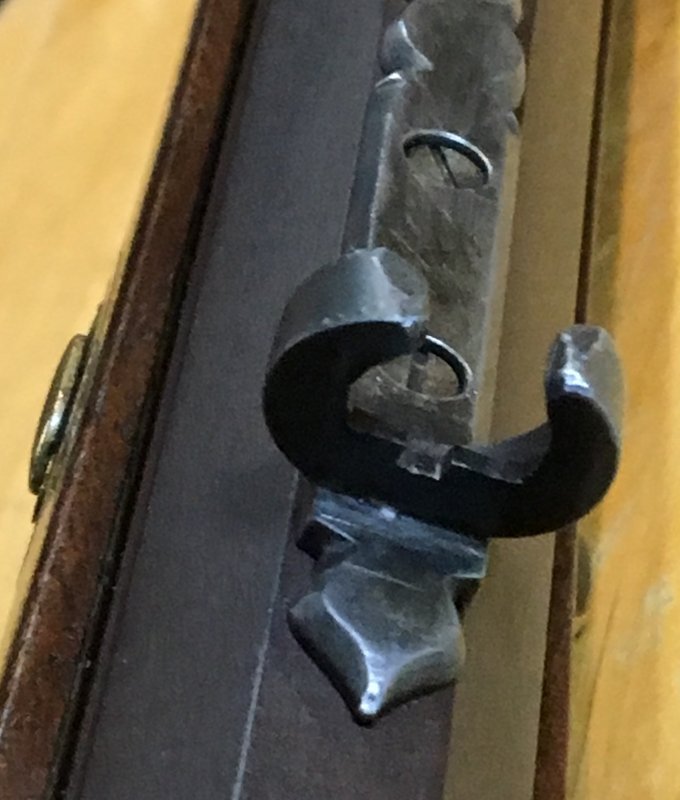 Have you tried removing the aperture from the tang sight altogether to make a ghost ring sight?

SD, what front sight did you use with that rear sight?
S

Grimord said:
Have you tried removing the aperture from the tang sight altogether to make a ghost ring sight?
Click to expand...

I did try that, it was somewhat better in the lighter part of the day but early in the morning and late in the afternoon it was difficult

Phil Coffins said:
SD, what front sight did you use with that rear sight?
Click to expand... 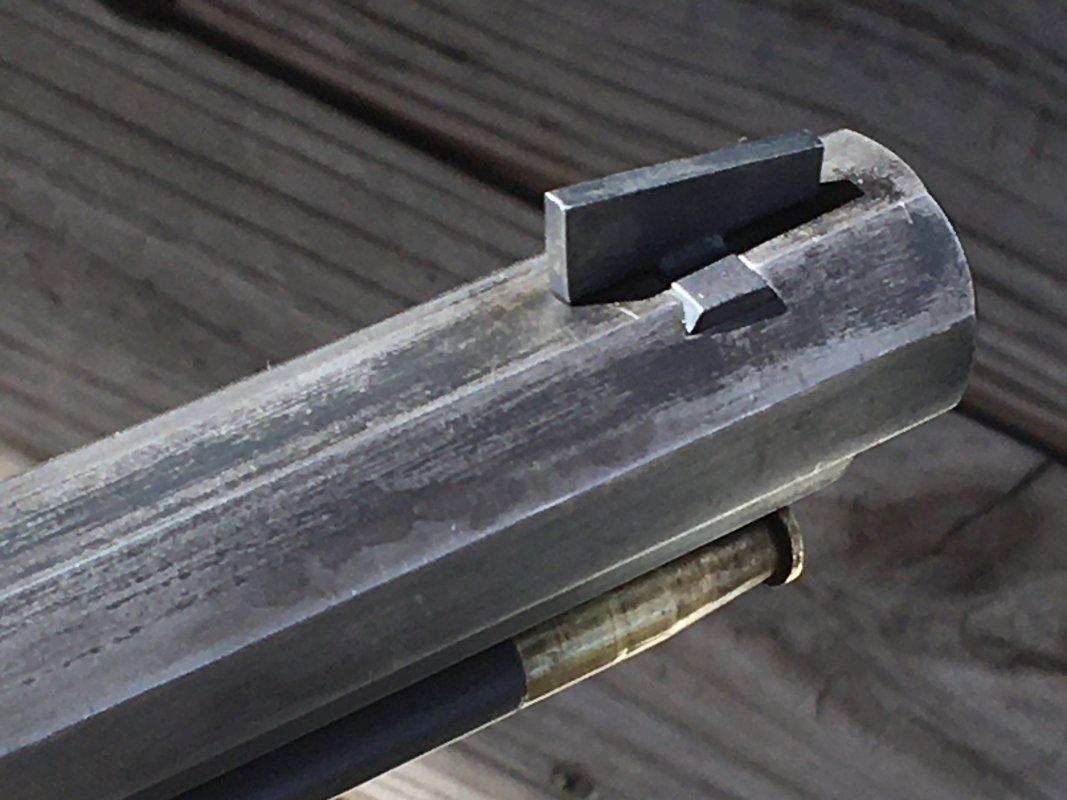 Did you look at the conversion sight from the Hawken Shop? They are one of the Forum's advertisers.

I made this one so I could go to shoots 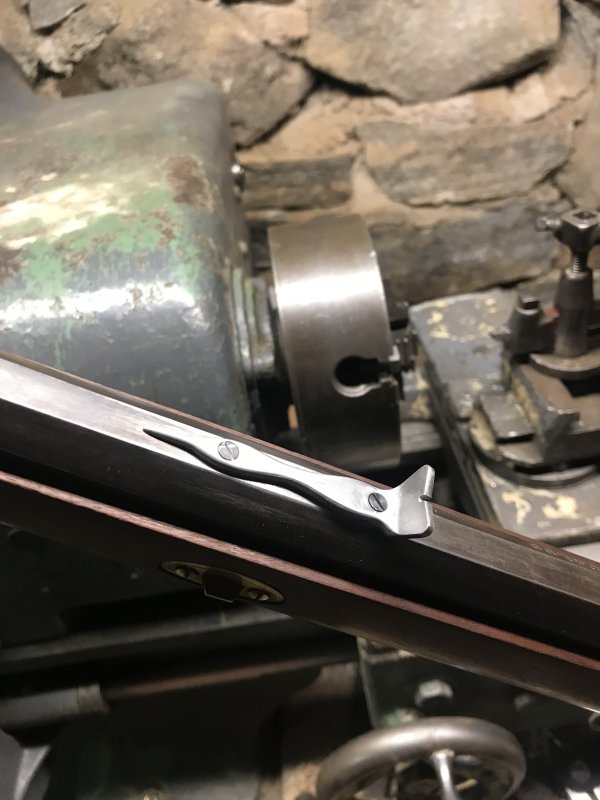 I hated the TC Hawkin sights. I put on a silver blade front sight and dovetailed in a buckhorn rear a little farther away than the original to accommodate aging eyes and loctited the screws in their holes and filed them smooth.

Grenadier1758 said:
Did you look at the conversion sight from the Hawken Shop? They are one of the Forum's advertisers.
Click to expand...

I would also file a dovetail on the barrel and then choose from the selection offered by Track of the Wolf.

I always put Buckhorn or semi Buckhorn rear sights on my rifles. The Lyman "primitive" rear sight is one of my favorites even if it's not really historically accurate.
S

I did look at the Hawken shop. My issue is I don't have the level of skill nor tools to do any metal cutting and with one shot only at getting it right I would bugger it up for sure with a hacksaw. I like the idea of the one SDSmlf showed so I could get a replacement blade sight or two for the front and file that down for sighting in and they seem cheap enough that if I jack it up I can tap it out and insert another, seems like I read that it is a 3/8 dovetail for the front sight. I guess I am kind of spoiled with the ability to adjust the sights for elevation and windage on the peep that is on there now, but the front blade would solve that I think.

I don't think I could ever be HC/PC with this particular gun, alot of what I have read suggests that the TC is too far afield away from the originals and I would not want to go to a gathering and be joked out of the place or not allowed because of gear (especially the rifle itself). Not being crital of the rules, they are what makes the gatherings extremely cool and fun, I am just too under-equipped to participate at this point, plus work schedule wouldn't let me drive 1,000 or 2,000 miles to one anyway

I am browsing now for a more HC rifle but sticker shock is so far is keeping me from it. I could probably swing one of the kits if they are not brutally difficult. I do woodworking with hand tools so I am way more confident there but the major inletting might cause me to fall on the floor and foam at the mouth so it would need to be minor stuff and key metal parts on the barrel would have to be pre-installed or at the very least drilled and tapped appropriately. I do have a Traditions Penn Long rifle that is basic except for the ram rod, and it might pass muster for HC, not sure though. My apologies for the run-on, I am new here and grateful for all of the knowledge and expertise you folks have.
1 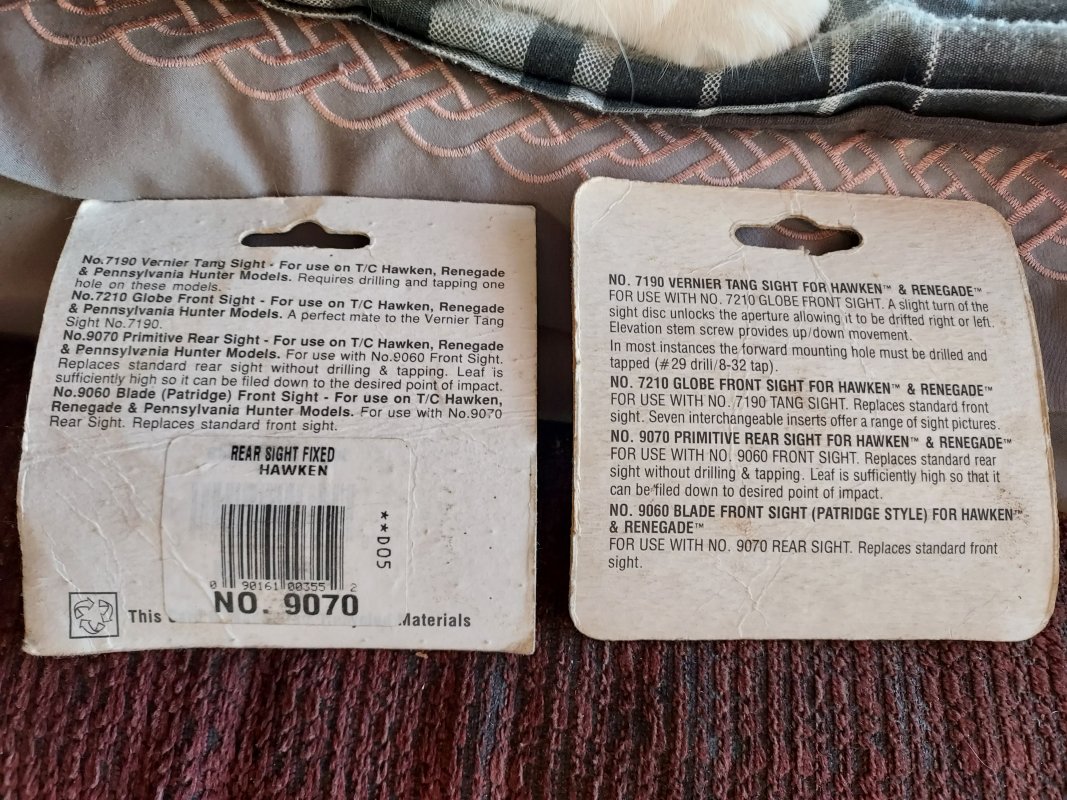 Here is what I did for my Hawken style rifle. I moved the rear sight further out for the old eyes and used the origonal holes and screws.

The TC Primitive sight was TC’s attempt to have a fixed sight, but in my opinion looked out of place, even on the TCs, just too modern.
N

My eyes are making it difficult as well. On my Hawken 45 and 50 cal I use the factory TC peep with the aperture removed so it is basically a ghost ring. I put a dab of fluorescent bright green paint on the front sight bead. It works really well for me with that configuration. I tried using this same peep setup on my short barreled custom rifle and could not get enough elevation on the rear sight to bring my POI up when shooting 400 grain conicals.
S

I tried removing the aperture but did not gain much in advantage, but then again I did not highlight the front sight either. SDSmlf and CT shooter have kind of what I was thinking I like the buckhorn the best, but I was hoping for elevation adjustment, it is what it is though.

Surrywoodman said:
I tried removing the aperture but did not gain much in advantage, but then again I did not highlight the front sight either. SDSmlf and CT shooter have kind of what I was thinking I like the buckhorn the best, but I was hoping for elevation adjustment, it is what it is though.
Click to expand...

I am not aware of many adjustable rear sights that fit the TC barrel hole pattern except some Williams sights, which I believe were used by TC as factory sights towards the end of their traditional gun production. If you are willing to cut a key way slot, a whole world of options are available.

I find elevation adjustment with traditional roundball gun sights not all that necessary, once you get your load worked out. I have a number of roundball guns that I have shot for over 40 years without adjusting the sights. When things change, powder for example, I vary the powder charge until I am back on the point of aim. I have notes for various powder manufacturers different granulations, and how much to load to get on target with the sights on specific guns, though group size may vary a bit.