Here is a little something for the holidays: 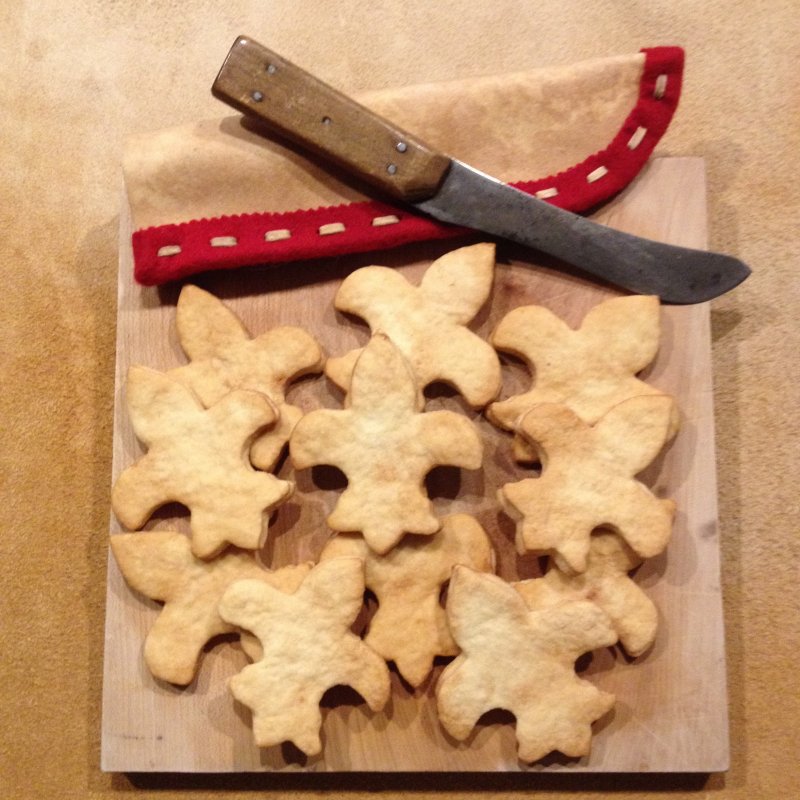 Biscochitos! I understand these are the state cookie of New Mexico, and a traditional holiday treat. I'm not a native or even a resident there, but relied on my friends Jim and Roberta to help with the recipe. Muchas gracias! The cookies shown are the result of my effort. Flavored with anise and cinnamon, these are really good, and in fact the whole batch of roughly three dozen lasted less than 24 hours! Based on the research I've done, traditional shapes included fleur-de-lis, like these, but also five-pointed stars or flowers. I guess the shape might depend on individual family traditions, but as I was not brought up in the tradition, I don't really know. I used the cutter we had, which was one of the documented shapes.

The knife is an old, pre-1890 I. Wilson skinner, and I believe to my soul this one has a boxwood handle, rather than beech, which is generally seen. The rawhide sheath is a copy of an old one I found in an image online. The biscochitos looked lonesome there on the board, all by themselves, so I put the knife and sheath there to give 'em some company.

They look like our Pennsylvania Dutch 'sand tarts'. Lots of good food in NM.

Nice write up on the history of the cookies and I love the knife. We have made fleur-de-lis sugar cookies for our cub scouts.

They do look like sand tarts, but obviously sand tarts don't have anise. I positively love anise cookies, being of Italian heritage, so I'll have to search for a recipe and see what these are like. My wife and kids are lukewarm at best about the cookies that I prefer over the holidays, but I LOVE anise cookies, both the harder biscuit type ciambellini and the softer "wedding cookies", not to mention anise pizzelles and others. Thanks for sharing.
E