tenngun said:
I have read Indians referred to honey bees as ‘white mans flys’ and that there was no honey bees in America before colonist.
I don’t know this to be a fact, and it brings up pollination problems.
Bumble bees do make honey, and all bee types, wasp or hornets, can pollinate. As they mostly live on nectar.
However, if bee keeping was an introduced it makes me wonder that enough bees wax could be produced for all the needs we call on it for in modern reinacting in colonial America
I’ve not any experience with bees, but have found wild hives and gotten wild honey a few times
Any way, I do wonder if we don’t over represent it’s use today.
After all an event is long on bees wax candles, and short on tallow, but it seems tallow was the most common back in the day.
I wonder if more light didn’t come from Betty lamps then either.
Just random thoughts on a Sunday
Click to expand...

There were men that followed the bees west. The Native Americans did not like them and would kill them. I can't remember the reason for their hatred towards them, but they certainly did not like them.

The most common thing I can think that beeswax was used for would have been for sewing. Linen thread needed Beeswax to sew with to keep the thread from fraying.

If we were able to go back in time we wouldn't be close to what is truly accurate.

thebeeswaxguy said:
Of course my first real post was going to be about beeswax!

I brought up the idea that beeswax would have been commonly used by frontier/settlers, and I kicked off a little debate so I'm posting the question here for all to discuss.

Would beeswax have been a gun care product that people used? I think so because of the availability in populated areas and it makes sense to me that someone looking to spent time outdoors would elect to bring a chunk of beeswax instead of an oiler bottle, which could break or spill. I think beeswax would have at the very least have been a known alternative for gun care. Wallace Gusler said at various points that beeswax was used on gunstocks, where did he source this information and how far back can we trace that usage?

The problem is the use of the words "frontier" and "settlers". This thread has gotten a little off on the scope of the question (imho).

There isn't a debate that towns and cities and areas with orchards kept bees, and that beeswax was produced. There isn't a debate that in London where Cuthbertson penned his manual, that using beeswax on a gunstock was a good idea. The problem comes when the modern idea that, because something is known and used, then everybody knew and used it, and to the same degree. That is often simply not so.

I offer the fact that a great many households, especially on the "frontier" would not use beeswax for lighting, but would use fat soaked rushes and a rush light. In fact, even those that had the money to sometimes burn candles also used rushlights, as evidenced by combination rushlights and candle holders. 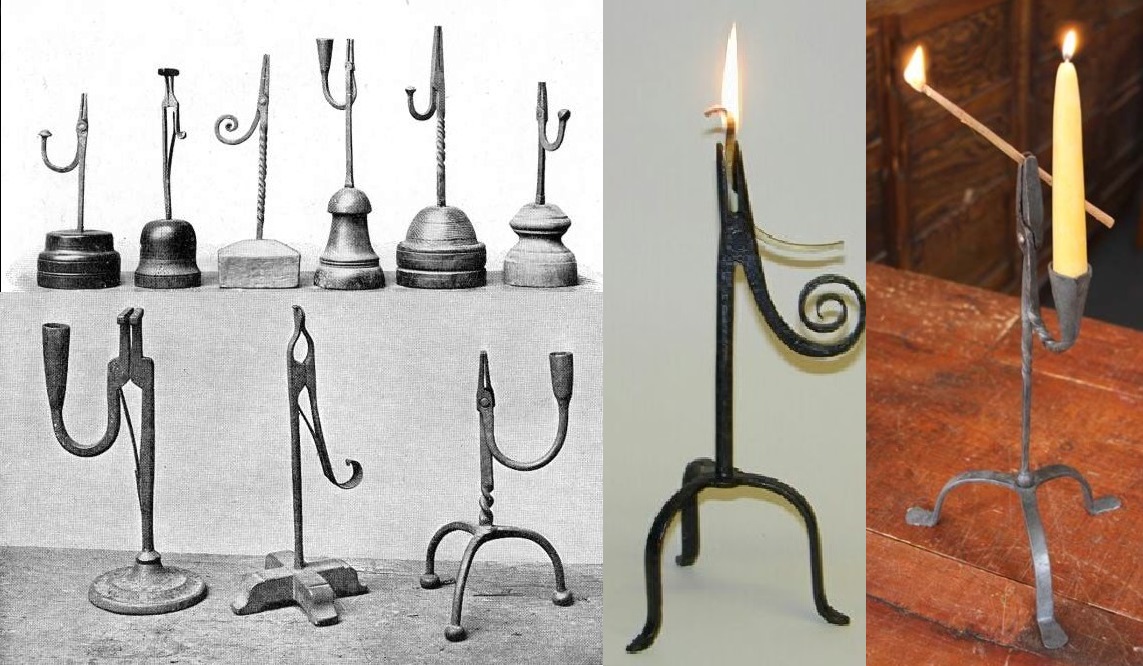 And this was true up into the second half of the 18th century even though bees were introduced to English and Scandinavian colonies in the 17th century.

Now as to eyewitness accounts, here is a quote from an actual beekeeper of the time who also cultivated a large orchard, and came up with what we would call a "modern" method for keeping bees rather than using the Bee Skep / Hive destruction method, and was a published author on the subject...

The honey bees are not natives of this country ; but they always keep a little in advance of the white population. We formerly had some professed bee hunters ; but the amount of honey obtained from the woods was never considerable, owing to the want of sufficient quantity of flowers to furnish it.

Notes on the Settlement and Indian Wars of the Western Parts of Virginia and Pennsylvania from 1763 to 1783 by Joseph Doddridge.

In the horticulture and culture of bees he [Doddridge] found an interesting and agreeable relaxation in his intervals of professional labor….,

In experimenting with bees, he deviated from the mode then prevailing – that of destroying them in order to procure their honey. And his success proved that his views respecting the economy and habits of these interesting insects were not incorrect.

In 1813 he published a Treatise on the Culture of Bess in which he gives a minute description of his apiary, and details his plan of treatment of the bees, which was that of colonizing them instead of killing them to procure the fruit of their labors.

Memoir of the Rev. Dr. Joseph Doddridge by Narcissa Doddridge.

So one needs bees for certain crops but NOT for the "staples" as they are self pollinating, and thus here in North America, the bees are introduced at the same time as orchards, and other pollination depending secondary crops, and when a new queen escaped from a hive, and established a wild hive in the woods, ahead of the white population settlements on the "frontier"..., there wasn't much for them to eat and to turn into wax. Not like today.

Now, do I use beeswax candles and a candle lantern at events? YES.
I make beeswax candles and sell them too, BUT....,
Truth be told the average soldier had no real illumination other than the campfire or the sentry fire (might be a light) and the common frontier person used a rushlight or light from the fire in the hearth... but that's not very safe compared to what we can do today.

Bees wax was a multipurpose product. It's availability was fairly common in the early American history. My studies have found here in my region of Central Missouri a what was termed "Bee trace" was found. This is a area in Missouri where numerous bee colonies lived this was located from Northern Randolph County to the Iowa border. From the Chariton River up around the Grand River.
F

Salt River Johnny said:
Bees wax was a multipurpose product. It's availability was fairly common in the early American history. My studies have found here in my region of Central Missouri a what was termed "Bee trace" was found. This is a area in Missouri where numerous bee colonies lived this was located from Northern Randolph County to the Iowa border. From the Chariton River up around the Grand River.
Click to expand...

What is the time period of this?

First mentioned that I found 1818 or a few years before. Settlers were coming to the area in the 1820s.

There are a few historic trails across the county, the most ancient of which is the Bee Trace, which, coming from the south, struck the county about the center of range 14 on the Grand Divide and extended up that watershed, passing through what was then called the Narrows, near the present site of Macon City, then through what was called Moccasinville and on north to Blanket Grove, which was in Adair county, just north of LaPlata.