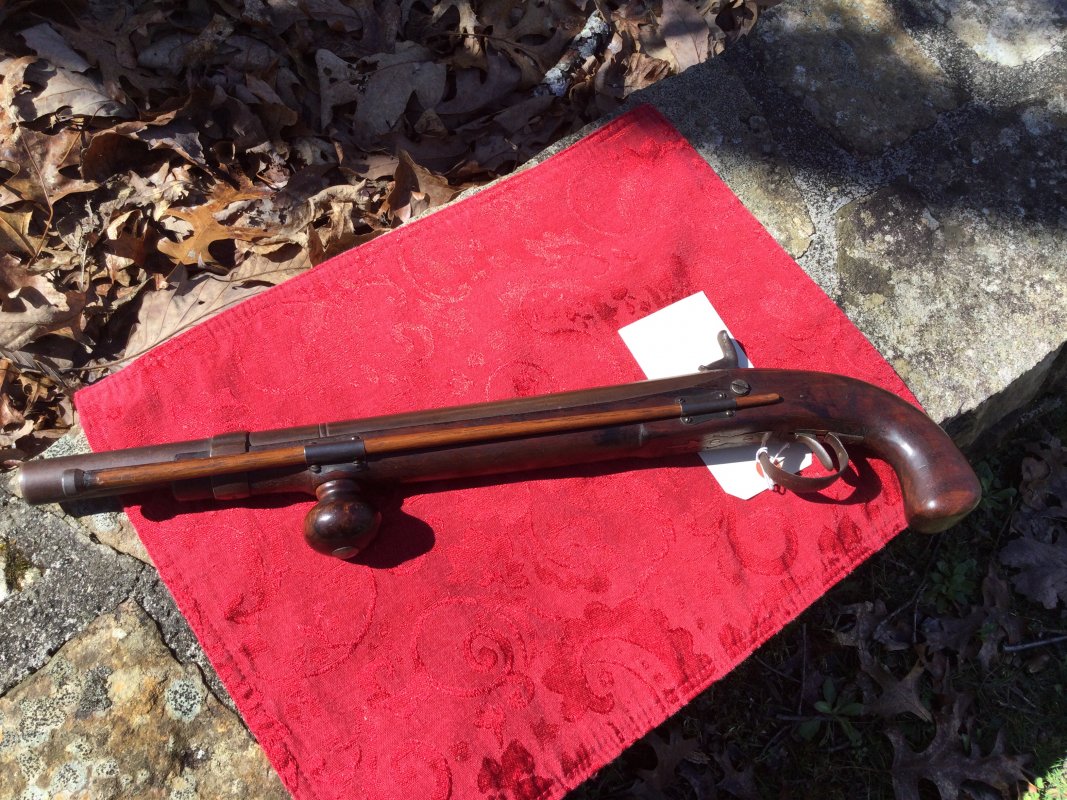 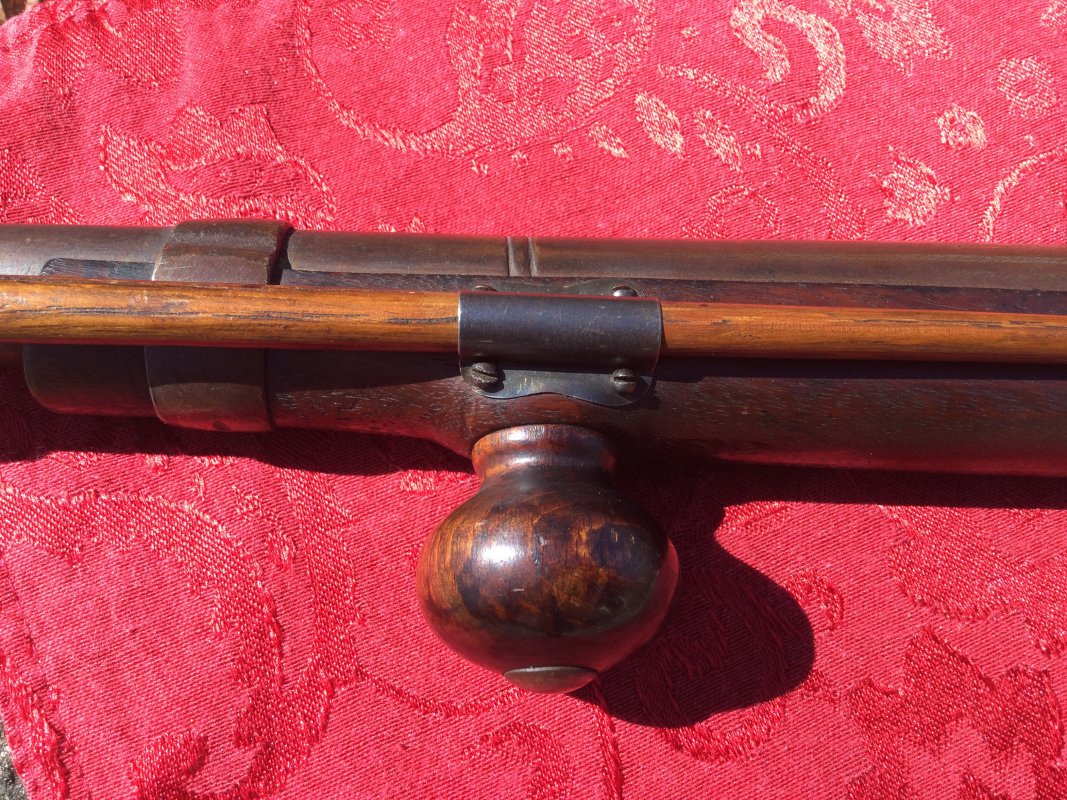 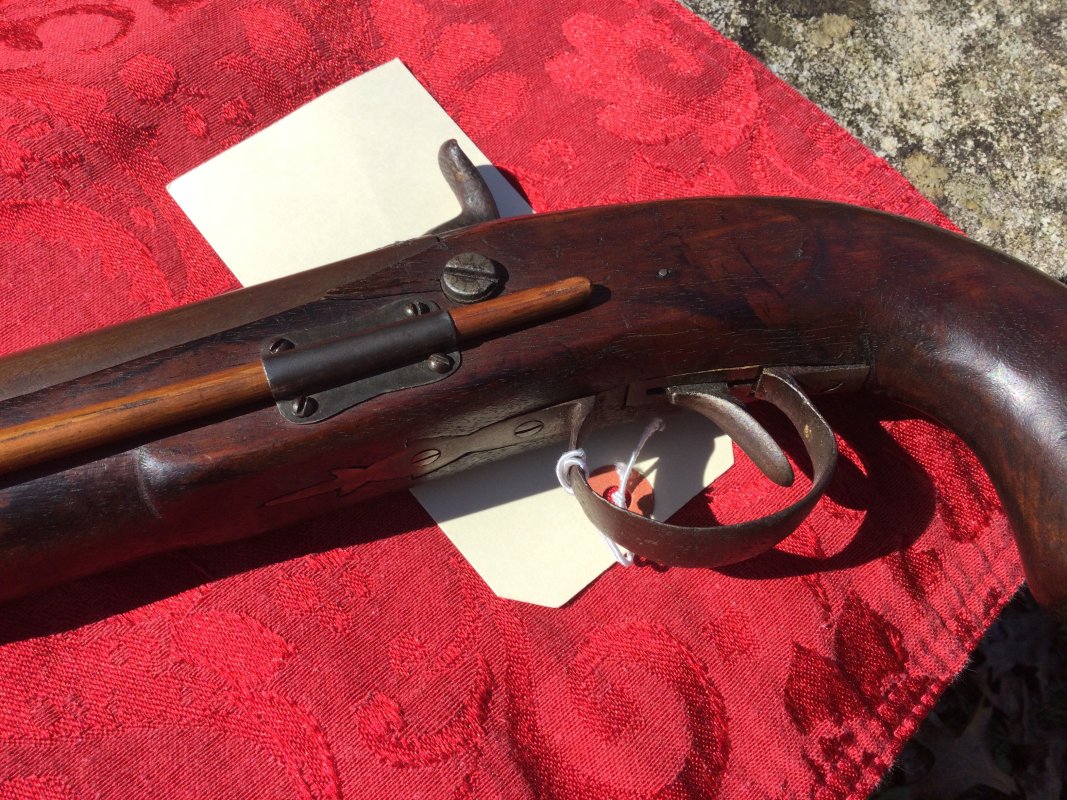 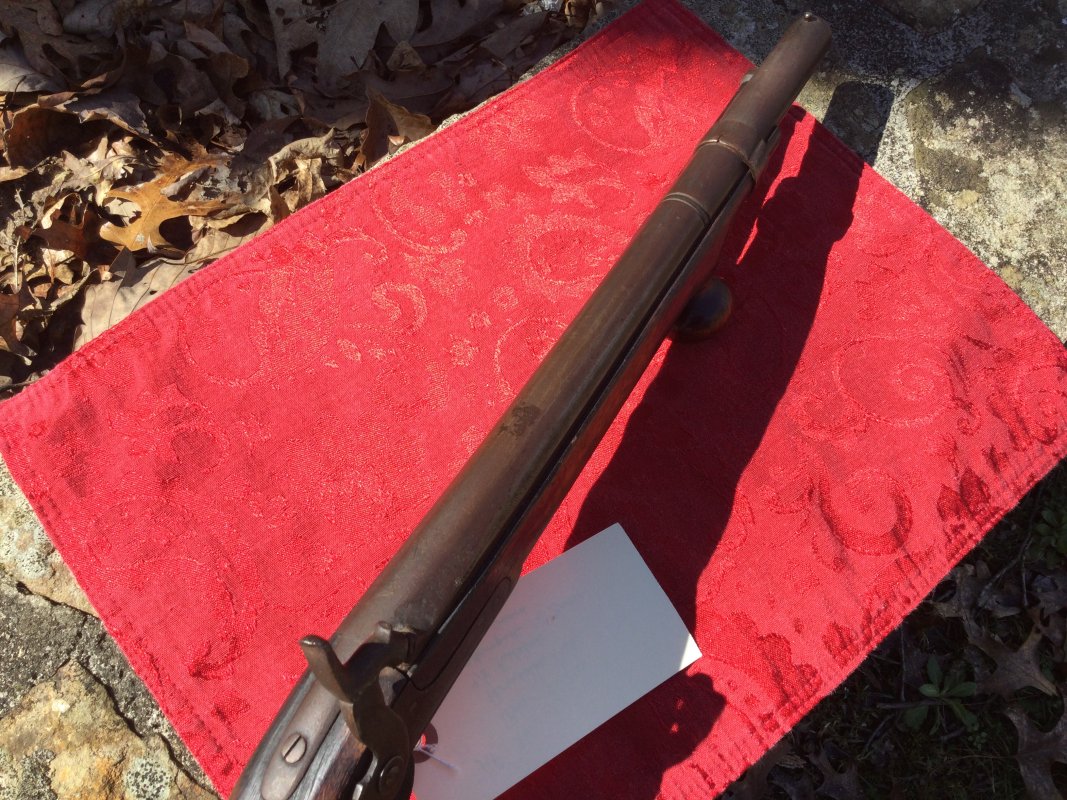 That is a pistol I could own with no problem.

I am dumbfounded! I've never seen anything quite like that before. Thank you for the additional photos!

I felt the same way. Amazingly that knob just feels like it should be there when you extend your arms and sight down the barrel. I suspect it would have certainly helped to control a stiff load. You can see in the photos that the stock was carved with a swelled area where the knob is attached, certainly not an afterthought.

An interesting pistol. The band is from a musket, you can see the remnants of the sling swivel screw slot in the bottom.

hawkeye2 said:
An interesting pistol. The band is from a musket, you can see the remnants of the sling swivel screw slot in the bottom.
Click to expand...

That's what I was thinking, too, although I have (rarely) seen images of larger pistols with slings. Some of the Boller pistols carried by Dixie Gun Works are examples. I don't necessarily think that is the case with the pistol shown by 1sogdusm, but it may be a possibility.

I'm perplexed by that barrel, though. I understood the owner to say it was .58 caliber rifled, which suggests a cut-down rifle-musket barrel, but the flats near the breech and the "wedding band" transition to round are unlike anything I remember seeing on any sort of rifle-musket. The appearance of the bolster for the nipple seat looks like some conversions from flint that I have seen in pictures. I'm not suggesting the pistol was ever flintlock, just that it may have been built around a re-purposed flintlock barrel. I'm clearly baffled!

One last observation is the high-dome round-head screws on the ramrod pipes or brackets. I would consider those another unusual feature. We note that those brackets (or pipes) are also very carefully formed to match the taper of the ramrod.

I'll look forward to reading comments made by others. It is a remarkable piece, and I appreciate the opportunity to view it!

I need to make a correction about the barrel, it is not rifled. It is a smooth bore. Sorry should have said musket barrel, 15.5” long.
M

Eric Krewson said:
I am a flintlock rifle guy and don't own any BP pistols, I made most of my BP guns so I have the process down. My nephew is a gun nut, any kind of gun and has lot of them, he has a lot of big bore unmentionable hand guns and wants us to build him a Tennessee Bear pistol to hunt deer with.

Do you guys know of any plans for such a pistol? I told him he would have to have the barrel made as 12" is as long as I have seen . I also noticed that 1 in 20 is common for pistol barrels, if this requirement is the best option for a pistol a barrel cut off of a different twist might not work well.

As you can tell, I am in the dark about getting the correct barrel to do what he wants from his future pistol, I am sure he will want percussion.

I was watching a Ky Afield segment where the host was deer hunting with just such a pistol, looked like fun and he did get a deer.
Click to expand...

Eric, about 20 years ago I built a horse pistol out of spare parts I had around the shop and used a rifle barrel in .54 caliber. The twist was 1-60 and it shoots round balls quite well out to the 50 yards I've tried it. Round balls really don't need much rotation to shoot well I found with this gun. It is quite accurate with a 50 grain charge of 2 F. My barrel is only 9 inches long and I have not run it through my chronograph so don't have any velocity figures for you.
It was an experiment really. I made a blade sight up front with brass insert , I also made the rear sight with a ghost ring (large diameter aperture) that is surprisingly accurate on a hand gun, of all things.
M

If your going to lug around and hand gun that large your far better off with a short rifle and sling ! You than have more power and an easier platform to aim and hit what your shooting at.
T

FishDFly said:
That is a pistol I could own with no problem.
Click to expand...