it is available. and if its available in Canada it for sure will be in the US
shipped to me in the mail.
hope the link is rite.

For all your sculpting, mold making, and casting supplies, just visit or call Sculpture Supply Canada, Canada's leading supplier of products and services specifically for artists and industry since 1988. Located in Toronto, Ontario.
www.sculpturesupply.com

dave_person said:
Hi,
Let's clear up some misinformation. Nitric acid is not a controlled substance and can be bought from companies like the Science Company in dilute and concentrated form. It simply cannot be shipped out of the continental US and requires ground shipment. Generally the shipper will also want a signature on arrival. I bought a substantial supply just a few months ago, no problems. Aqua fortis means "loud water" and was originally the archaic term for nitric acid. Nitric acid alone, has been used as a wood stain since at least 1100 AD and is described as such in Theophilus' famous treatise "On Divers Arts" published in the 12th century. Alone, it gives wood, including maple, pink, orange or yellow tones when blushed with heat. Centuries later, the label "aqua fortis" was associated with a stain made from iron dissolved in nitric acid. In fact, our common usage of the term to mean that stain is likely a relatively modern phenomena. Making aqua fortis stain by dissolving iron in nitric acid is not hard and makes a fine stain for woods like maple that have little tannin in the fibers. Woods such as cherry and walnut have considerable tannin and may almost turn black when stained with aqua fortis. However, the acid is fairly strong and should be neutralized after blushing with heat. As I wrote previously, complete blushing theoretically drives off all the hydrogen ions leaving iron oxide behind permanently bonded to the wood fibers and should not require neutralizing as no acid remains. However, complete blushing usually does not happen in practice and a basic solution such as ammonia or baking soda in water should be applied. Ferric nitrate powder dissolved in water makes the same chemical solution as modern aqua fortis stain, iron dissolved in nitric acid, but the acid part is much weaker and poses little danger to the user. The weaker acid should mean that no neutralizing is required after blushing but I still do that step just to make sure. Ferric nitrate is much simpler to use than modern aqua fortis stain because you can adjust the concentration much more easily. It produces the same effect in maple as aqua fortis stain. With the availability of ferric nitrate, I don't fool around with modern aqua fortis stain any more. However, I do still occasionally use nitric acid as a stain when I want to give maple a reddish or orange undertone as a base under some other stain.

Great information, this group always amazes me with the knowledge available.

Ferric nitrate is available from the Science Co.. Not expensive at all, and can be shipped readily.
S

I know It has been a while but I am close to finishing. Do you think I can pull a little more red out of the wood

You can always stain AFTER the ferric nitrate treatment.

I've tried that before, and got NOTHING.
S

A plain-Jane Kibler SMR with no carving and iron furniture. Not nearly as gorgeous as some that have been posted, and not as well-lit a pic.. But this is what Kibler's aqua fortis looks mine on my fancy maple... 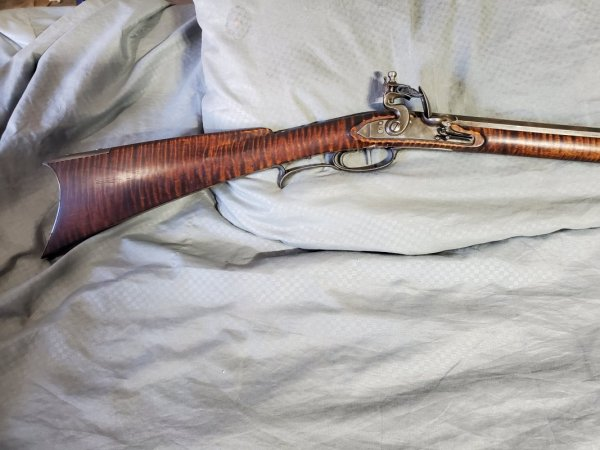