At What Range Have Most of Your Big Game Animals Been Shot At?

I shoot front stuffers a lot at 200 yards.

Id likely never try an initial shot at an animal at that distance (maybe a coyote), and of course, follow ups on a wounded animal if ever needed.

I only shoot a boomstick to fill the pot with a little added challenge. Bow hunting is for pure challenge. So there’s a different mind set.

I also hunt VERY open country. A lot of times, 100-150 yards is where getting closer starts getting REAL interesting.

Disregard the weapons. Pictures show the terrain I hunt.

As a still hunter who hunts the timber. I love to sneak in close. I don't believe I ever took a kill shot over 60yds. Most are less. This was for elk, bear, and muley.

Now i'm old and down to just muley. Still having fun trying to get some meat.
S

So ONE TIME I shot at a deer, and Luckily I was successful, at 110 yards. Bang-flop. She was a very big doe for my area and I under estimated the range at 80 yards.

Twice, I've harvested at under 10 yards.

" …, 200 yards may be taken as the very outside limit at which it is ever advisable to fire at ordinary [large] game ; not because the rifle may not be accurate enough to ensure frequent hitting at much greater distances, but because the probability of killing at such ranges is very small indeed, …, In the jungle, at least one-half [of the large game shot] are under 50 yards, three fourths under 75, and all, with scarcely an exception, under 100 ; that is to say these are the distances at which animals are usually killed in jungle shooting, and I imagine that the case is very much the same in other forest countries. If any one thinks that the general run of his successful shots are at longer distances than these [in a forest setting], let him put them to the crucial test of measuring ; and, if still unconvinced, all I can say is that his experience differs from my own and that of most shots of my acquaintance. " James Forsyth The Sporting Rifle and Its Projectiles 1867

So the above is from the book written by one of the foremost large game hunters of India, and more than 150 years ago. I see how he supposes his results apply to any forest area of the world. He was also the man who came up with "Forsyth rifling", and he himself wanted large bore rifles that would shoot extremely flat out to 200 yards, BUT curiously, he notes that his shots, as the OP and myself have also found, are under 100 yards and mostly around 50 yards , when in the woods. He also hunted dangerous game in India with the same results, and although other bullets were available, HE preferred as did his peers, the patched, round ball.

It was true then and it's true now.

He was also a big fan of double-barrelled smoothbores of around 14 gauge with patched balls for big game hunting.

Before blackpowder hunting, most of the game I shot was 200 to 300 yrds. Farthest shot was 625yrds.

After blackpowder hunting, everything harvested was less than 155 yrds, as my farthest shot with a muzzleliader was 155 yrds. Of the big game that I’ve taken with blackpowder, most of it was under 30 yrds, quite a bit of it was taken at around 5 yrds.

Once I started hunting with blackpowder…I learned how to hunt.

Where I live in Georgia; one will rarely be presented an opportunity to take anything over 50 yards. I suppose you could hunt big farms and stretch one out, but I usually keep to the woods myself. Any decent sized muzzleloader with iron sights would be perfectly adequate for the range that I shake hands with whitetail.
O

Longest shot I ever made , was on a whitetail deer , coming off a drive , and moving slowly through a pasture field. I had a good rest , and had shot the .62 longrifle lots at the range. I held 8" above her nose , and shot. I heard the ball hit her , but there were three other deer with her , and they scattered. I thought there were only three deer , but there were four. When three ran away , I figured we would have a a long night tracking job. I tried stepping off the distance from where I fired the shot , as the ground was level. When I got to around 167 steps , I gave up trying to figure the range , saying to myself , that nobody would believe me anyway. I still had around 50 steps to get to where the deer was when I shot. The five of us , shooters and drivers , were standing where the deer was , when I shot , and the youngest guy in the group, came up toward us , and said , there was a dead deer in the ditch he crossed just below us. It was the doe. She was shot through the neck. That was the longest shot I ever made with any rifle on deer..........oldwood
R

I’ve hunted in the northeast and Midwest only and rarely had access to farms with crops that drew deer in. 60 yards is about average for my shots at deer. Longest was 120 yards or so over snow. I miscalculated the distance because deer look bigger to me in the snow, I guess. It worked out. I won’t take a shot over 80 yards without a rest.
O

I once belonged to an ancient whitetail hunting club that kept track to the forties. Our camp was walled with dryer felt (CANVAS) that recored all shots taken made and missed. Over forty years, the average was 65 yards; Open hardwoods and swamps in the Adirondacks. Shorter for bear. Most were less than fifty yards. Nothing that a well-sighted flintlock could not accomplish.

Location
East of the Kaskaskia River in Illinois Country

Most of mine have been with unmentionables. Longest, 81 yards. Most have been 40-60 yds. Closer shots are more intense. The big doe at 81 yds I felt didn't even know I was in the county. My CVA .45 is zeroed at 50yds.
O

Shot an Elk in Idaho in 1979. When I filled out the info in the guides journal about the details of the kill, such as distance, size of the Elk, & other particulars, I read back thru the journal for several years. Not a single Elk shot at over 125 yards. Based on my experience of 60 years of hunting, I would say MOST animals are shot at under 100 yards, regardless of what they are or the method they are taken. The exception might be Sheep hunting in the high mountains.
S

All of my deer except one I killed right here on the farm I now live on. Around 30-35 total, 20 or so with M/L's. Here's the thing - unless it's during the rut or opening morning, the same deer come out in the same place, poke around, and go back the same way most every day. Lots of times I just sit and watch them because when I was a kid if someone even saw a deer, you called the neighbors. Times change.

For me, harvesting one of the corn-fed white tails is still a rush, and a flintlock is a bit more fun, but there's not much challenge. 30-50 yards average. Drinking coffee, smoking a Kool.

Only exception are crippled or obviously sick deer. Watching anything suffer because some fool didn't kill it or follow up a bad shot is intolerable. Same thing for sick ones - and we're seeing more around here in recent years. Anyway ... heart shot, patched round ball.

0, yes that's zero yards on two occasions, to 612 yds when including all weapon types.
Last edited: Today at 3:43 AM
E

I mostly just pig hunt anymore. That is using blinds nowadays too. It seems if you shoot a deer the animal lovers act like you shot Bambi or something else Disney like. Anyway I do not remember shooting much farther than 25 yards when hunting big game. When I was deer or elk hunting I don’t remember shooting farther than 25 yards either. With modern or muzzle loaders.

Now I did used to varmint hunt and setting up on prairie dog towns several hundred yards away. 400 yards was the farthest at the time, but mostly 100 to 200 yards. Of course that was with a modern cartridge varmint gun.

Typical with muzzleloader right around that 50 yard mark. Except for three occasions all big game has been within 100 yards.
N 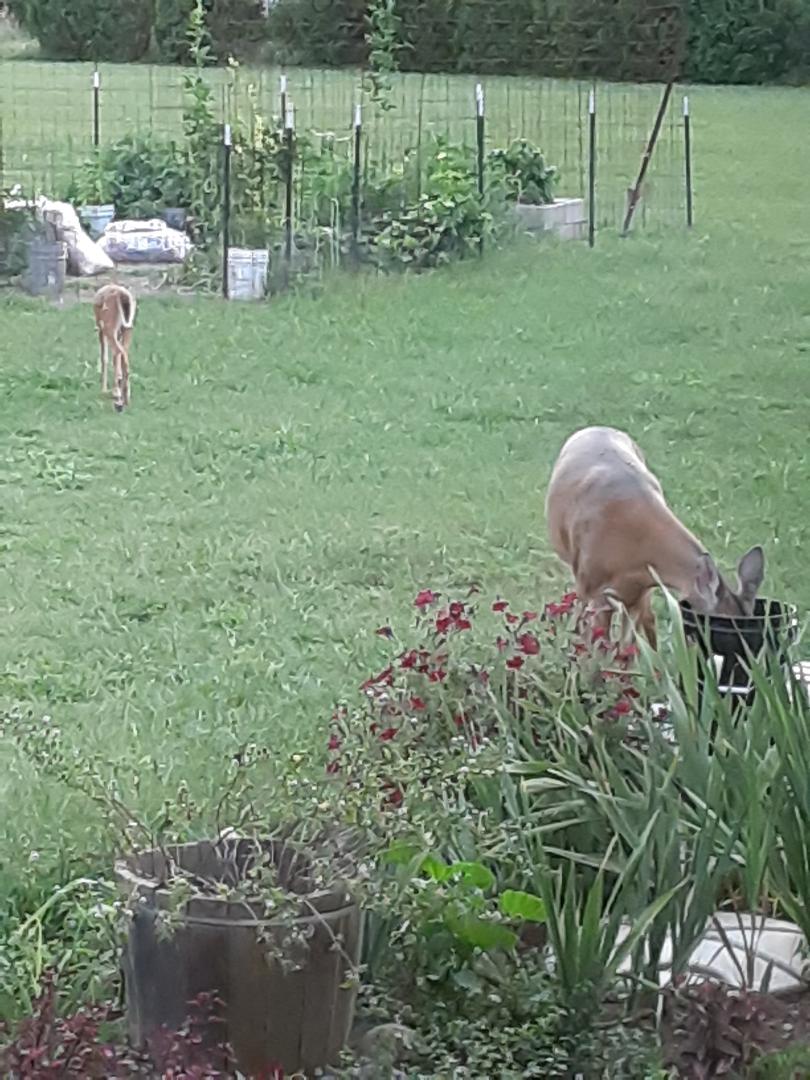 Walkingeagle said:
550 meters down to 3 paces. That is the range from furthest to closest. Whitetail at 550 meters on a called neck shot, 5x5 bull elk at 3 paces (ground level) with a bow. I’m in the West and have hunted fields that were a mile wide by a mile and half long. That is one uninterrupted field! So it all depends on the terrain being hunted and the firearm of choice. I have taken elk, moose, black bear, mule and whitetail deer. Furthest muzzleloader shot was a mullie at 100 yards with a .488” patched hard ball (wheel weight cast).
Walk
Click to expand...

'Whitetail at 550 meters [metres?]' on a 'called neck shot'? That's almost 600 yards, Sir. I doubt I could SEE a Whitetail at that distance, except as a blurry blob.

smoothshooter said:
He was also a big fan of double-barrelled smoothbores of around 14 gauge with patched balls for big game hunting.
Click to expand...

I think he recommended 14 bore with very large powder loads as the minimum for deer sized game .

I don't recall of he ever wrote if that was "in case" one ran into a tiger (SxS would give him a defensive shot after using the first to down a deer) since he was in India, or simply he wanted no tracking in the jungle.
LD

Marshhawk said:
Most of mine have been with unmentionables. Longest, 81 yards. Most have been 40-60 yds. Closer shots are more intense. The big doe at 81 yds I felt didn't even know I was in the county. My CVA .45 is zeroed at 50yds.
Click to expand...

It’s so hard not to get excited when they are really close…I like, “intense” great word to use.

Freezer meat with my 54!