Any good sources on daily life in Mexican California?

Apparent Two Years Before the Mast is pretty easy to find - you can even get it on your Kindle. https://www.amazon.com/s?k=two+befo...=c&hvqmt=e&tag=mh0b-20&ref=pd_sl_9ornj8w875_e
S

bprvan said:
Zorro was written by an Irish writer long after the period and never set foot in California. As the Irish say pure "Blarney"
As a Kid I enjoyed the movie matine` Zorro stories just like Hawkye and many others. Mike Hammer anyone ?

Hilarious how the fat sergeant always wore a girdle, which would be exposed to much laughter.
B

Timuni said:
I thought Zorro was set during the Spanish period? Also I'm not sure as to the historical accuracy of those films. Was thinking more of either primary documentation or academic studies.
Click to expand...

Did you really mention the "Historical accuracy" of a Hollywood movie?

bprvan said:
Yount , We still have a town called Yountville, northaest of San Francisco bay.
In the newer versions of history we are told that California was
stollen from Mexico but not from whom the spainairds and subsequently the Mexicans stole it from.
The Californios as the inhabitants called themselves were very unhappy with the Mexican governments indifference to their needs and desires plus that mot onerus of all governmental greed TAXES.
They subsequently joined with Fremont and many other Americans to creat the Republic of California , A short lived country like Texas.

Timuni said:
I'm curious to learn what daily life was like in what's now the state of California during the Mexican period (ca. 1821-1848). I know there were some English-speaking settlers already coming to the region during the 1830s, as well as American and British ships visiting to engage in the California hide trade, so maybe that could provide us a window into California under Mexican rule for those of us who can't read Spanish. Although if there are any translations or works done in English on the lives of local "Californios", that would be equally interesting to me.

I'm also aware that the Russians had the Ross colony in California during this period, so there's a third angle that I'd love to read about when it comes to Californian life and society in this period.
Click to expand...

springfield art said:
Hilarious how the fat sergeant always wore a girdle, which would be exposed to much laughter.
Click to expand...

I love that guy! Sergeant Schultz, Right?
“I see Nothing!!!”

Celticstoneman said:
Did you really mention the "Historical accuracy" of a Hollywood movie?

Disparagingly, yes. I wasn't the one who brought it up in the first place.

BadDaditood said:
I love that guy! Sergeant Schultz, Right?
“I see Nothing!!!”
Click to expand...

That's Hogan's Heroes ... set far and away from Mexican California

Shot on the same lot as Zorro

Timuni said:
I'm curious to learn what daily life was like in what's now the state of California during the Mexican period (ca. 1821-1848).
Click to expand...

There are a lot of missions in California, most with some artifacts and of course books and records in Spanish. I am sort of a "Mission Junkie" First came the Franciscan Missionaries and their missions were taken over by Spain, then Mexico fought for its Independence around 1821 and had the area until about 1848, so of all the player, Mexico had the area only around 27 years, far less time than the Franciscans, Spanish, or Americans. I am told there are a few of the books translated into English but I agree the Spanish versions provide very valuable information.
Yount- I think he is the person who first found the Napa Valley and he must have known something about agriculture because he felt it would be ideal for growing grapes.

Red Owl said:
Yount- I think he is the person who first found the Napa Valley and he must have known something about agriculture because he felt it would be ideal for growing grapes.
Click to expand...

Uh, No! He was the first Non-Hispanic European descended person in the valley, as opposed to the Hispanic European descended and the indigenous Wappo. If memory serves it was Mariano Vallejo that encouraged him to move to the Napa Valley and helped him obtain a land grant from Gov. Nicholas Gutierrez for Rancho Caymus in '36 after he became a Catholic and a Mexican Citizen, and the Rancho La Jota grant from Alvarado in '43, which gave him control of over 16,000 acres of land. Grapes were planted on one of his properties but only because wine was made for personal use.

The whole of the Southwest was going through what seemed to be perpetual change at the time. Based solely on the land grants made and given, I have always believed Gen Mariano Vallejo was solidifying a power base for his own land grab. He controlled Bodega Bay, San Rafael, Petaluma, Sonoma, Martinez, Napa, and Sacramento through the major land grants he was instrumental in obtaining, a few smaller ones around Vacaville and Fairfield, and the Sierra Nevada mountains past Sacramento, coupled to the land grants of relatives, he pretty much would have had a wall it looks sort of like this: 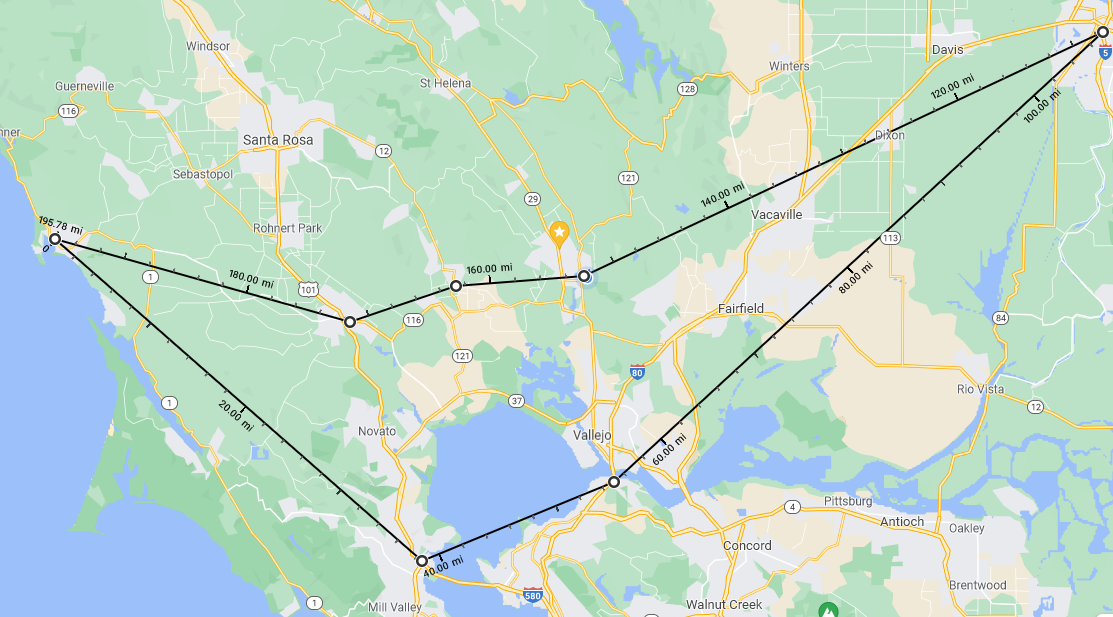 There are, to my knowledge, no writings to support my theory. I believe he wanted to be the Sam Houston of Alta California, however the drunken Bear Flaggers came along with their revolution which is a totally hilarious story in itself. Coupled to that was the Mexican American War and Manifest Destiny all happening at the same time, so Vallejo did the only thing he could: He became a US Citizen and a Politician.

Napa's fame for wine is relatively new. Up until the 1960's Napa's main money came from Peaches, Plums, Prunes and Cattle. There were a number of Tanneries, a leather glove company and Red Ryder jeans. A high end Winery is on the site of one of the old slaughterhouse's on the Silverado Trail.

While it is definitely arguable; the Napa wine boom started big with what is referred to as the 1976 Judgement in Paris.

If you can find a copy and have an interest in such things read George Yount's Chronicles of the West which is his semi-autobiographical biography. I say this because he was semi-literate through out his life and was a Mountain Man to boot. To make matters worse, specifically a Tao's Trapper who came to California with the William Wolfskill trapping party, so their may exists some slight exaggeration in some of the events.
But who am I to speak as, I am,
Mad Michael

Great post, @Mad Michael ! I think you're on to something there.

I have the biography of George Yount. I found a good used copy (likely unread.... I had to slit some of the pages that were still joined together) and started reading but got sidetracked and didn't finish it yet. I think I mentioned the book in my earlier post on this thread. I also found an interesting biographical article about him from the California Historical Society Quarterly from April 1923, digitized and available online right here: The Chronicles of George C. Yount: California Pioneer of 1826

As a footnote, the mountain man and pioneer George Yount was the uncle of Harry Yount, shown here... 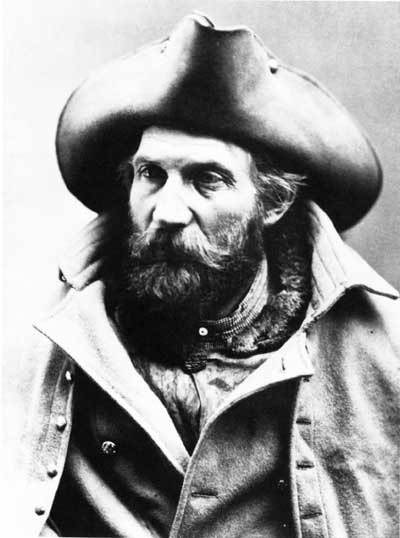 Harry had the distinction of being the first government appointed "game ranger" and de facto park ranger in Yellowstone National Park. He was evidently an accomplished mountaineer and plainsman in his own right. See Enigmatic Icon: The Life & Times of Harry Yount

I understand that William Wolfskill was one of the founders of the citrus industry in California. There is a nice, short article about him, written by a descendant, on the Old Spanish Trail Association website, right here: William Wolfskill

Another noted mountain man who retired in the Golden State was Jim Waters. His Hoffman & Caampbell rifle, pouch, and horn are evidently still in existence, in a museum in the vicinity of San Bernardino. It would be great if a some knowledgeable person could locate it, examine it, and write it up with some good pictures. His was the rifle that inspired me to go ahead and get a fullstocked Hawken-style mountain rifle built by Mr. Bergmann. This is the only photo of the Jim Waters rifle I could find online, and it cuts off the heel of the butt: 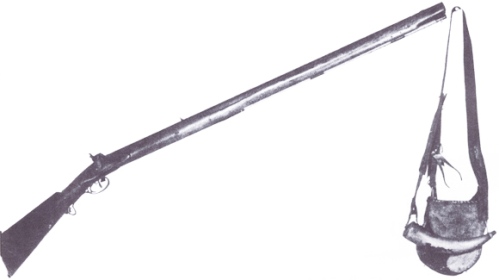 Not all of the old trappers froze to death in the mountains!

Notchy Bob said:
I have the biography of George Yount. I found a good used copy (likely unread.... I had to slit some of the pages that were still joined together) and started reading but got sidetracked and didn't finish it yet. I think I mentioned the book in my earlier post on this thread
Click to expand...

Bob, Thank You for the comment. I have found most of the copies are like that, at one point I owned three copies, donated one to a library, still have one, and loaned one to a friend who up and moved taking a couple(well, six but who counts) of my books with him. Yes, you had mentioned the book, I had wanted to reference it in my post but got distracted and then had to cut myself off. I can, and have, written several hundred pages on this particular time period and a fair bit of it was on Yount.

Yes, his nephew, Harry was a ranger at Yellowstone and is generally recognized as being the first national park ranger, even if he received no money for it or official title.

Wolfskill was a fascinating man and is credited, as you pointed out, with starting the citrus industry in California as well as with developing the Valencia orange.
Micheltorena granted him a large land grant outside of the Napa Valley around Puta Creek. While the name is from a Miwok phrase and generally pronounced "PEW-Ta'" or even "Pewter" shortly before his ouster, I am certain Micheltorena must have appreciated the accidental double entente in Spanish. Going along with my premise on Vallejo, I believe he was placed in that spot like a Go Stone used to fill in a Seki.

A whole lot of those old trappers did not freeze to death in the Mountains. James Clyman lived and died in Napa and is buried at Tulocay Cemetery. His rifle is full stocked and his family still owns it and his house. Joe Walker had a ranch near Martinez and is buried in the Cemetery there. Peg Leg Smith is buried in Colma, Beckwourth and Ewing Young lived in California before moving on: Beckwourth to the Colorado area, Ewing Young to Oregon. Besides Jim Waters is another San Bernardino pioneer named John Brown (the mountain man not the abolitionist). While there are quite a few others, Let us not forget John Boyden Adams, also known as James Capen Adams and Grizzly Adams.

Then there is the whole Russian and HBC thing, ultimately we have the gold rush and the Chinese which I won't go into as it makes me way to crazy.

Well they all must have figured California was the promised land. I'd like living there if it wasn't for the traffic One afternoon it took about 2-3 hours to go from Muir Woods to Vallejo. Holy Cow batman! BTW- how is the hunting in the mountains just north of Napa?
You must log in or register to reply here.
Share:
Facebook Twitter Reddit Pinterest Tumblr WhatsApp Email Link