Need help to identifying this . Bore.708 length 8 7/8 oal 15.5 inches smooth bore.ok you all know way more than me.what do you think value would be 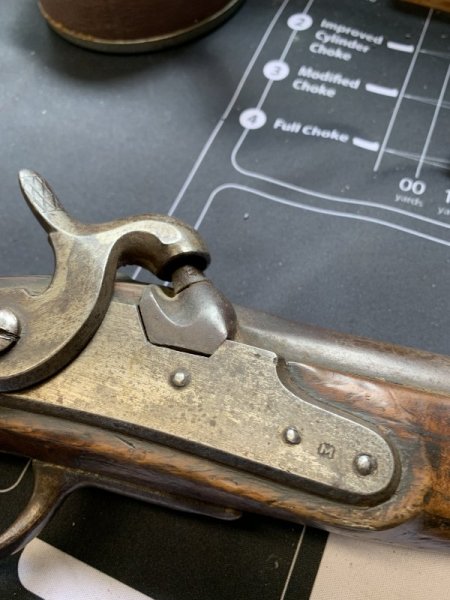 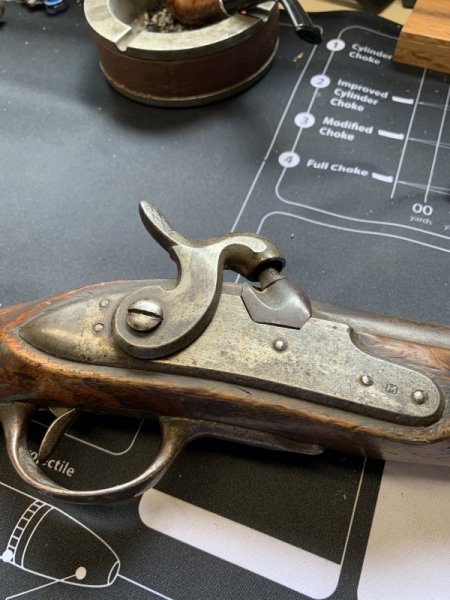 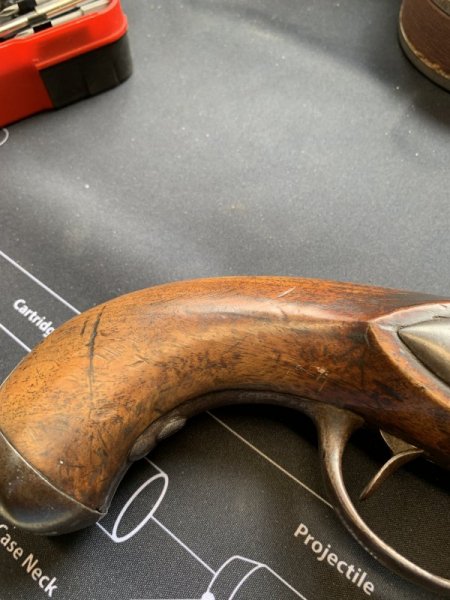 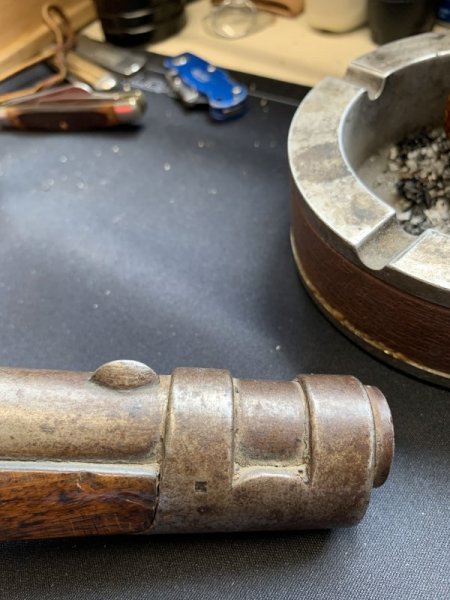 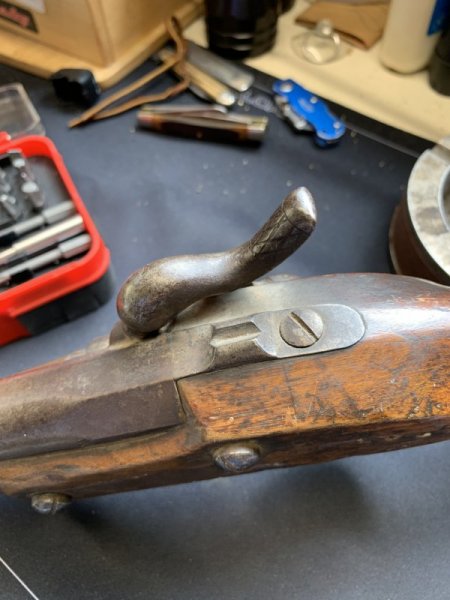 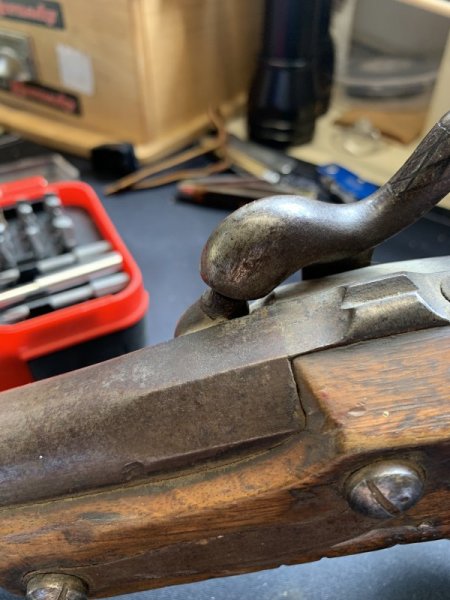 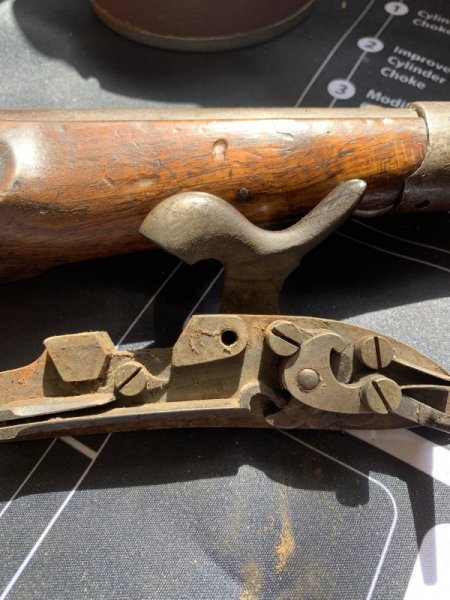 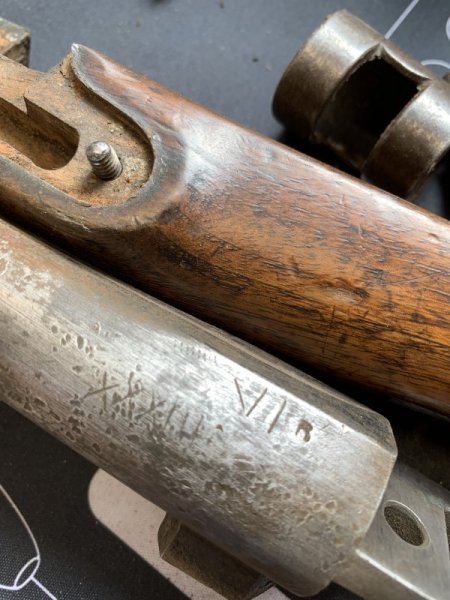 Please don't shoot it until you learn more. I like it but sure don't know what it is.
G

No I will not shoot it until I find more about it .it might be French military but not sure yet.looking for help in identifying it
T

Please take a FULL view image of each side.
G 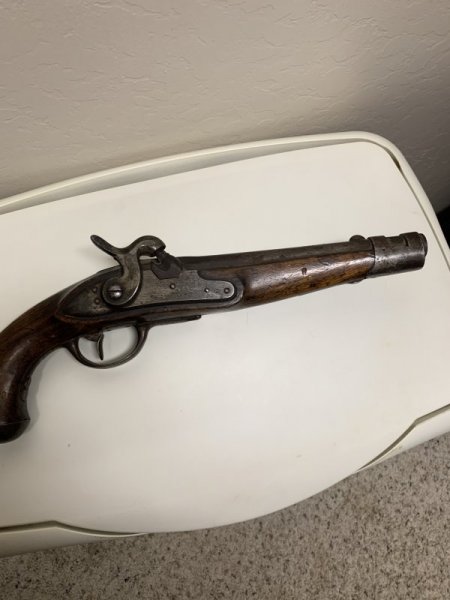 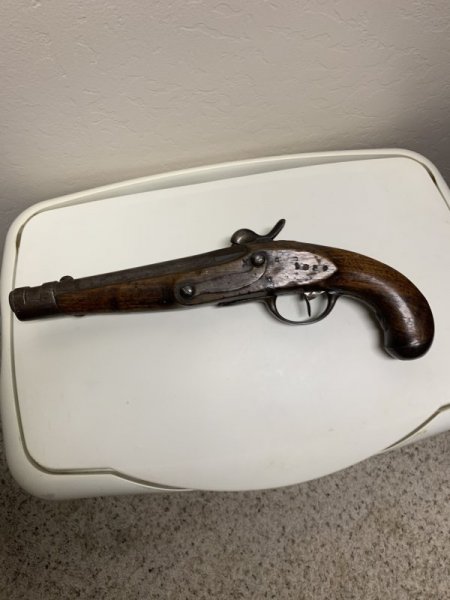 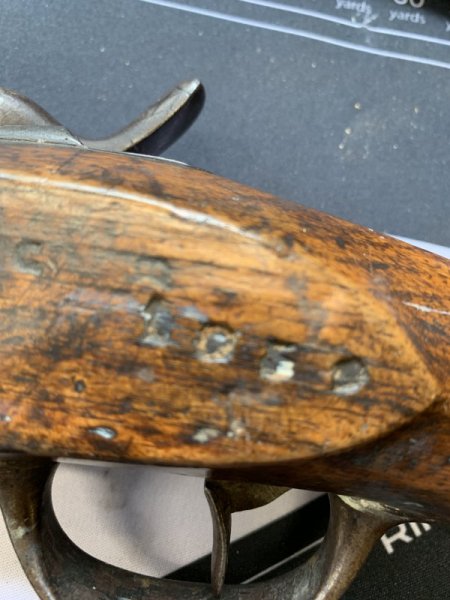 Looks like it was from hasty finished parts. I base this on...

ALL of the screws show no wear at all, none. Even the internals of the lock screws...
The barrel band is friction fit. I thought that when caplocks came into military muskets and pistols, friction fit was something of the past...
There is one and only one stamp on the metal parts, and that's the M on the lock plate. No engraving or stamping on the lock plate outside nor inside. The barrel has the chisel marks of Roman numerals, but no proofing marks, no ownership marks, no armory acceptance marks. So it might be from the mid 1850's but may have been fashioned from new parts at time of war....hence no time to mark anything....
CSA horse pistol, rarely if ever used? Perhaps issued and then put away as the owner brought his own revolvers, and left that at home? Maybe bought specifically to be left at home when the owner was away....see Scarlet O'Hara and the Yankee intruder for the scenario....

That barrel band looks familiar. The lock appears to have been converted from flintlock, probably by 1840. It looks like one of those Belgium assembled pistols from surplus parts during the 1850's or later.
Belgium did this and shipped these guns everywhere. Let me check on that barrel band.
N

It smelled Belgium to me!
Nit Wit
G

As of 8 September 1846, ALL firearms produced in Belgium were required to be subjected to gun proof and stamped accordingly. Prior to that, firearms were stamped with the Perron, a well-know Liége landmark that looks like Nelson's column in London.

Is there any way you can have a look under the barrel?
T

If I'm not totally wrong , this is the " Bayerische Perkussionspistole M 1843 " . Quite rare , congratulitions to Your find !
Very odd looking with an awkward hammer and a hell to shoot !
G

TFoley last picture in first set is under side of barrel.only marks I can find
G

Enfield I think your right,found a picture of one on line sure looks the same.but was not able to find much else on it .
E

I have a Pattern 1839 Enfield musket barrel with almost identical style Roman numerals stamped on it. Was commonly used for marking by gunmakers?
R

Hello ALL again. I wasn't able to find where that barrel band came from. Sent the one photo off to some collector friends to see what they can find.
Meantime I think I can add a little more here. The more I look at the photos the more I'm convinced it is one of those - shall we call it "re-manufactured" - guns from one of the Belgium gun factories sometime in the 1850's to 1860's.
I have read that the various hash marks (/// or \\\), Roman numerals, letters, even complete numbers somewhat haphazardly stamped on the stocks, were in part so the various components could be later identified during final assembly, as many components were actually fitted to new wood stocks. So you could end up with a pistol (or musket) with a Belgium barrel, English lock, and French hardware - all assembled to a new stock. LOL That's why it can be so difficult to ID these guns.
This was not a small one on one buying of parts. A Belgium factory would buy another government's complete inventory of surplus parts. They would then build/rebuild complete guns for resale to the civilian markets all over Europe, Africa, and even North America. And even today, they do show up everywhere.
Belgium was a prolific gun making center. And this reuse of surplus parts must have been profitable since it seemed to go on for some 20+ years.

Here is a good example of these repurposed guns: I believe this is another one of these Belgium pistols. It has a late English flintlock pistol lock with barrel and components from - who knows where - assembled to a simple, newer made 1850ish stock style. The barrel band is held with a pin on just one side if the stock - all assembled in the simplest manner possible. You can see the "hash marks" in the lock mortice area. 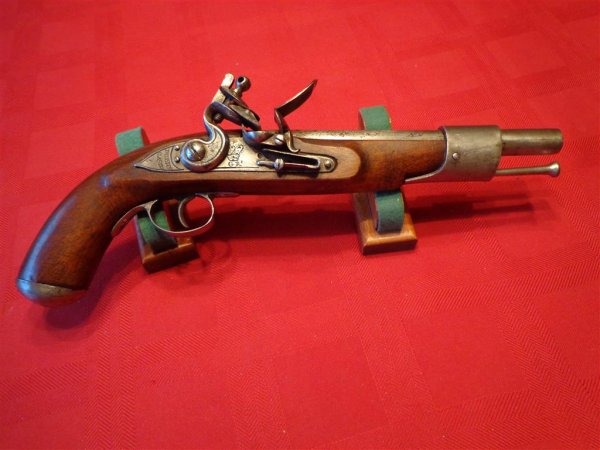 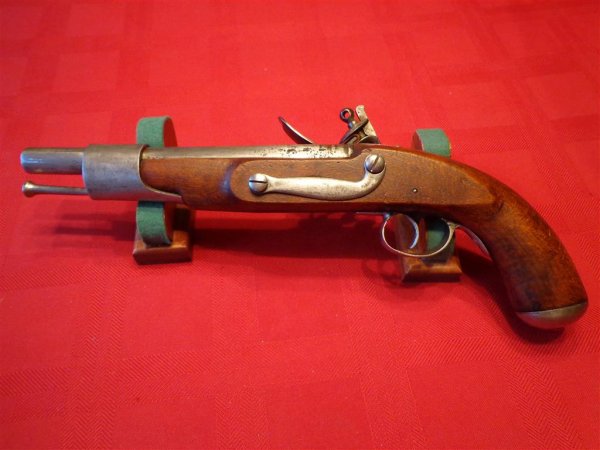 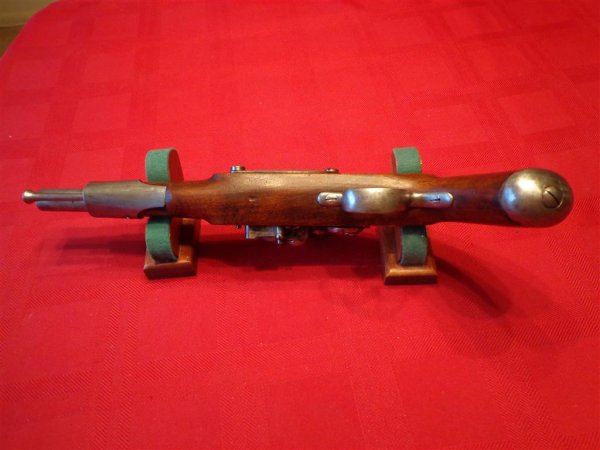 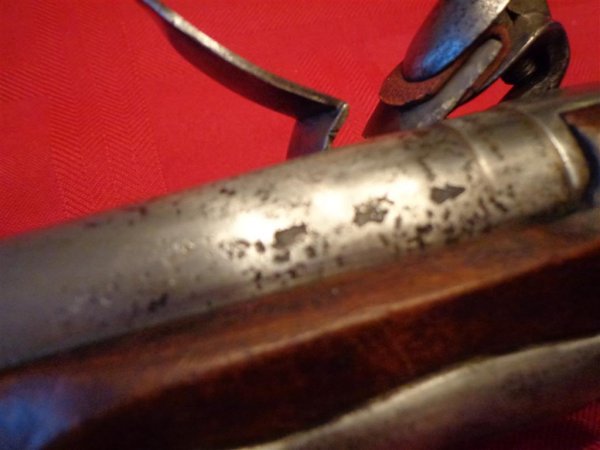 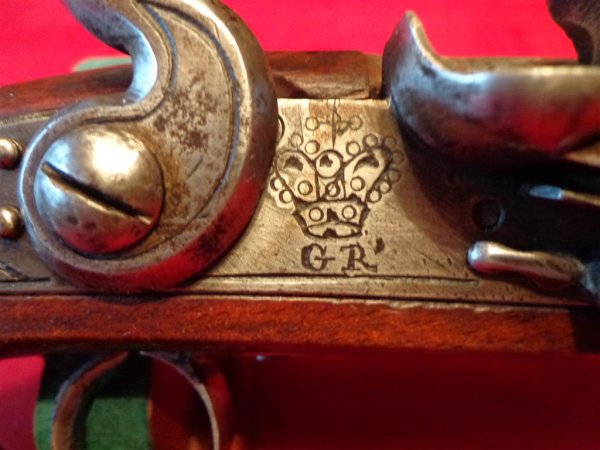 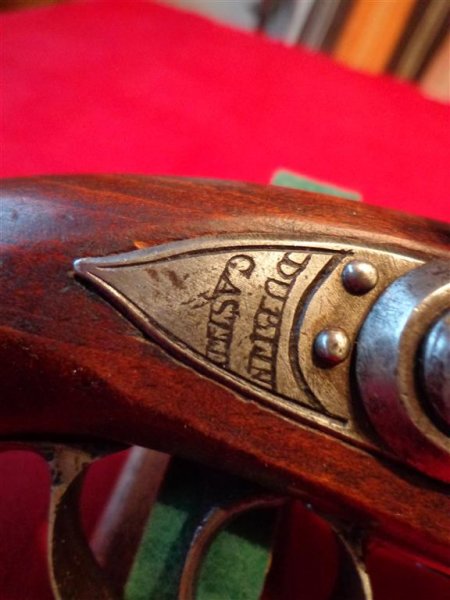 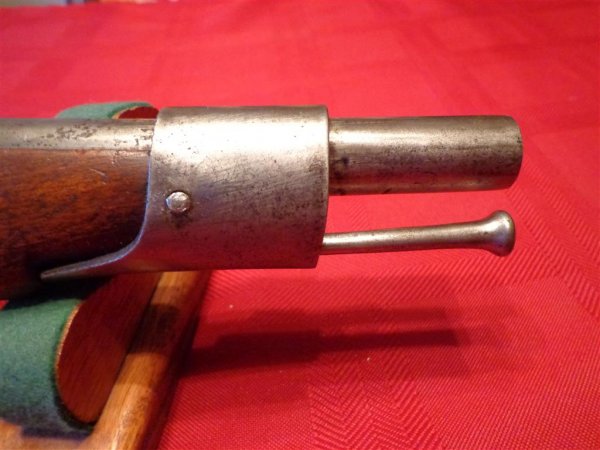 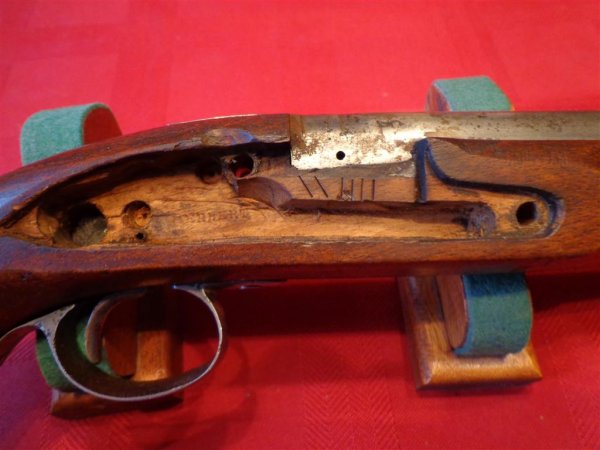 Sorry to rain on various parades, but I am NOT liking that 'engraving' one bit. It is very very crude by comparison with the real thing, which is almost of coining quality. The holes also appear to have drilled using a Forstner bit - and they were not in common use until around 1875 or even later. It looks French, but it whatever else it is it certainly does NOT look English.
R

Dear Rick I think you have that one pinned precisley barrel & lock related rest' got up 'of oddments result servicable pistol fit for ship or any other usage even in some cases peddled of to the US for the Biceneinial cant see Belgium proofs can see what appear to be London ones or not Belgium ones Its not 'wrong' its what it is , kept very well that's in its favour. There was a huge am
mount of making up and altering guns deemed obsolete surplus for the Africa /South America & any other market that wanted them . Mint Whitworth's & Remington Zuoaves being examples well worthy of our study .Is that a stamped name in the lock mortis ? .
Regards Rudyard

PS Dear T Foley My parade is dry yes the lock engraveing is crude but Dublin Castle was notabley not coining quality and why bother for such a got up piece ?.
Regards Rudyard
Last edited: Mar 28, 2020
2
Share:
Facebook Twitter Reddit Pinterest Tumblr WhatsApp Email Link