A thread about a recipe for southern cornbread got me thinking and remembering, so I decided to post one which is my favorite. This is typical cornbread of rural western Kentucky in the 1930s, the recipe was published in the Louisville Courier Journal.

The secret to really good cornbread is the crust, and the trick to making the crust just right is to heat the pan and drippings good and hot in your oven before you add the cornbread batter. So before you do so much as get out a bowl to mix up the batter, turn the oven to 450 degrees.

In a 9-inch, round, cast-iron skillet (or reasonable facsimile thereof), put about 4 tablespoons of drippings. Bacon grease is the traditional choice and gives cornbread a distinctive flavor. Butter is tasty, and about a tablespoon of butter along with a bland vegetable oil will give you good taste with less saturated fat to feel guilty about.
Pop the skillet, grease and all, into the oven. Please note, you can't accomplish what you want by heating the skillet on a burner on top of the stove. Doing that will make hot spots in the bottom of your skillet which in turn will make your cornbread stick to the bottom of the pan.
While the grease is getting good and hot in the oven, mix the cornmeal, salt, soda and baking powder in a big bowl. Add the egg and milk or buttermilk and stir until just blended.
Remove the skillet from the oven and very carefully (don't burn your hand!) swirl the grease around in the skillet so it coats the bottom and the lower half of the sides.
Now pour the hot grease into the cornmeal mix. If everything is perfect, it will snap, crackle, pop and bubble invitingly. (Even if it doesn't, there's no problem. It just means your grease wasn't quite hot enough and you should leave it a smidgen longer the next time. But don't leave it too long and start a fire.)
Mix lightly until the grease is just blended in, then pour the cornbread batter into the hot skillet and put it back in the oven for 20 to 25 minutes until the bread is firm in the middle. If the crust isn't browned on top, pop the pan under the broiler for just a few seconds to get it crispy golden. Serve from the skillet or turn the skillet upside down on a big plate and the cornbread should slip right out.
If you want to make corn sticks, use the same recipe, but pour the batter into greased corn stick pans and bake for half the time.
Serves 6. 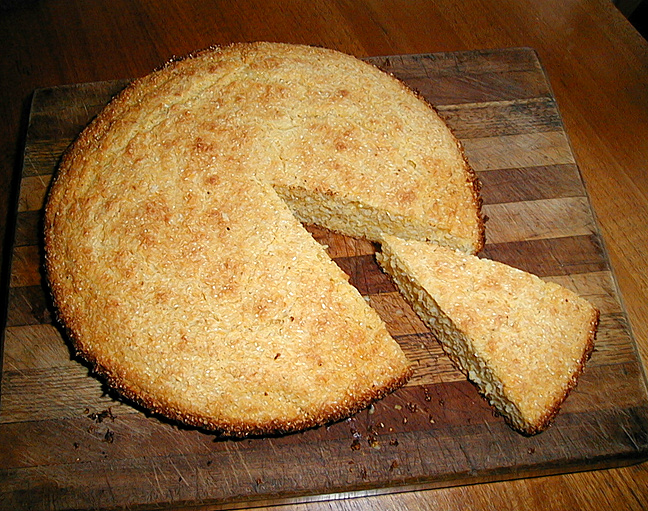 Spence: I cooked this just as directed, but substituted coarse stone-ground yellow meal for the white, and it was the best cornbread I ever made. I'd been trying for a long time to make cornbread like my Grandmother made when I was a child, and this is it, spot on. A piece of this bread, hot and with butter melted on it, along with a cold glass of sour buttermilk brought my childhood rushing back. When I had another glass of cold buttermilk filled with crumbled cornbread, eaten with a spoon, I was back at the table in her house in "the holler", near Whitesville, Kentucky. I was sitting at the little table with my teenage uncles when they got home from school and I was allowed to share their after school snack. I was four or five, and I was sitting in a chair swing my feet because they wouldn't touch the floor, and I was as happy as could be with that cornbread and buttermilk. My feet touched the floor, this time, but I felt the same when I ate it.

You paint a nice childhood picture there. Very familiar with Lundy's recipes from her book Butterbeans to Blackberries.
It's my go to book for the peach cobbler recipe.

G
venison burgers with a twist