Planning an American jaeger, have collected a 31" a swamped 50 caliber barrel, Iron furniture for an early Virginia rifle and a nice chunk of American walnut. Would like advice on building a 'Franken-Jaeger'. Thanks, Geo.

Sounds kind of like mine. Mine is Jeager in form, but has a nose cap and toe plate, an early English type lock, and no patch box. Bird Dog Six built it for me as a no-frills, non-fancy "working gun". Except for the lock, most of my furniture is typical German. 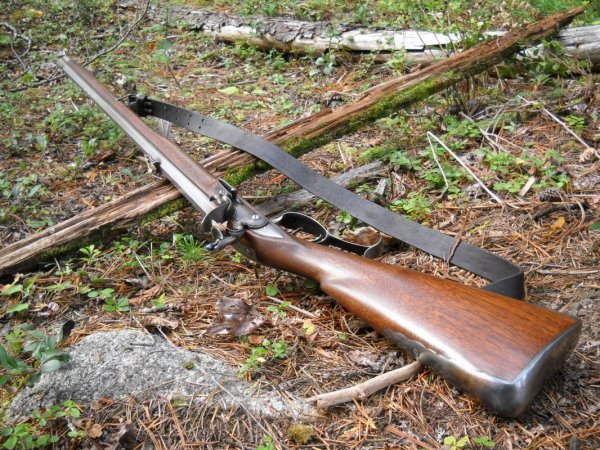 When creating a short-barreled “American jaeger” that is historically plausible one has to think “why?” When, where, and why would a short barreled rifle be made from scratch in the colonies? Were longer barreled rifles being made here at the same time? If so, who was the customer and why did they not prefer an import at likely lower cost? So to me the most likely scenario for an American “jaeger” is a restock of a rifle made in Europe and broken or worn out here. And it would likely be out of style and in a corner by 1790.

Thanks Rat, your gun is very much like what I hope to achieve; a good working rifle using the parts I have and can add to. Thanks Rich, you brought out some good points, and the Jaeger being the father of American long rifles, it is of course safe to assume some were here, and used by people as a hunting gun until the transition began. Restocking and different nationality influences are probably valid bases for a frankenjaeger.
R

Nice rifle .The long versus short preference much depends on your taste Ive made & used 44" long American Long rifle styles. But Much prefer barrels of 28" or 26" or even 24" These where normal enough lengths in European rifles where long barrels where known & made as exceptions. They are not an American invention , The longer barrels might better suit poorer quality of powder available or just perceived to be better . Fashion dos'nt always follow logic. If light to carry 30" or so is fine . Re weight from my angle 6 pounds maximum and one 50 cal with its 26" round swamped barrel in English mid 18 Provincial style runs just 5 pounds and is a delight to carry ( If certainly its a poor sort for a range, but I once I went 13 days though off track native NZ bush with it ) As to why such a short rifle could have existed any number of factors would fit . I would certainly fit a tool box , big deep affair to carry flints, vent pick, jag or worm, bit of rag to stop them rattling . I suppose you could put patches but I doubt that was their main function despite the common title most give it . Cool Bananas . Rudyard

Rudyard said:
I would certainly fit a tool box , big deep affair to carry flints, vent pick, jag or worm, bit of rag to stop them rattling . I suppose you could put patches but I doubt that was their main function despite the common title most give it . Cool Bananas . Rudyard
Click to expand...

I agree that a box would be nice (and appropriate). I also keep mainly NOT patches in my box, though it is entirely understandable, in my opinion, that we call them patch boxes. After all, it was rifles that were fitted with boxes – not smoothbores. What is the only accessory a rifle needs that a smoothbore does not? The patch.

Though I agree that the period term “box” does not help us out in this regard. Hence, I prefer the period term and – just for kicks - usually keep a few extra patches in there along with a tow worm, tow, and rag.

Thank you, Rudyard and JB, I'm going to be a while getting to this build, and am considering a precarve plain maple from Pecatonica; I've never inletted a swamped barrel, or cut a box with a sliding wood cover, which Pec's offering would absolve me of having to do, allowing me to concentrate on other aspects of building I am familiar with. I just like the Idea of a German style hunting gun, and their use of horn and antler, carving and wire inlay. How can I say it? It just seems like Home. My Mother's side of the family and my childhood friends the Cappens would approve this endeavor, along with a whole bunch of teutonic ancestors!
R

Interesting observation perhaps its the typical use of smoothbores, less time afield ? . Or simply not the custom , certainly a good point you make . I did a 17 trip in British Columbia once carried a doube16 bore flint to cap shotgun had no box but kept right brl with shot & left with a patched ball . big country with big wild beasties . But soley sought small game for tucker .
Regards Rudyard

rich pierce said:
When creating a short-barreled “American jaeger” that is historically plausible one has to think “why?” When, where, and why would a short barreled rifle be made from scratch in the colonies? Were longer barreled rifles being made here at the same time? If so, who was the customer and why did they not prefer an import at likely lower cost? So to me the most likely scenario for an American “jaeger” is a restock of a rifle made in Europe and broken or worn out here. And it would likely be out of style and in a corner by 1790.
Click to expand...

Interesting to consider, Rich. I like the Jaeger style; up here in the dense MN woods, it probably would be quite sensible and, considering my short stature... The muzzle of my early lancaster meets the tip of my nose; makes loading a bit of a chore for me. I think that if I would have thought things out better, I'd have asked my builder for a jaeger...back then.
R

Short barreled guns are handy and if you like flintlocks you’re limited in selection of general types. For myself, I need a long sight radius to shoot reasonably well.

Building from a blank is actually a lot easier than using a pre-carved stock. But it takes longer.
R

Well if your pre shape is about what your after Ide say the Pre shape was less work . And I've done enough of each to know. But if you prefer to stock from a blank go for it . Regards Rudyard

In 1790, I don't think anyone would regulate a good working Jeager to the corner, because it wasn't "in style".

T'was the American Indian who drove the demand for long barreled rifles, and in turn the young white American men, who respected the woodcraft of the Indian, who followed suit. I'm sure there were many who favored a shorter barreled rifle, "style" or not.

I own an original long rifle, which was cut down, back then, when in use, to make it easier to carry on horse-back.

I have not seen a law, or decree, which states that on a certain date, all gunsmiths will henceforth cease making short barreled, jeager style rifles. !!!
R

Well, there are darn few surviving original short barreled, early American flintlock rifles known and hundreds to thousands of original flintlock long barreled rifles known. So some combination of 1) darn few to begin with and/or 2) a high discard rate led to this scarcity. We’re talking about an extremely rare gun type in America. If anyone knows of well documented examples I’ve not mentioned let’s see and discuss.

I think a combination of #1 and #2, or, a "combination of the two". Certainly in that era the long barreled rifle was the norm. Certainly "style" did play a part. Young men wanted to emulate the Native Americans, and a long barrel, small caliber does have it's advantages for those far out on the frontier, living off the land, and far from resupply. That might make it extremely rare (I'd say somewhat uncommon) on the frontier, but probably right at home back in PA or New York. That just does not make an "American Jeager", or "Transitional Jeager" "historically incorrect".

Your point seems reasonable until one considers that those known "hundreds to thousands of original flintlock long barreled rifles" probably date to Rev War and later. If you restrict the time period to the same early period of the known short barreled rifles, is the ratio still as lopsided? I realize my question is rhetorical because we don't have accurate dates for hardly any of these real early rifles whether long barreled or short barreled. But if you were to restrict the selection to just the rifles you think were F&I War and earlier, what would the ratio be?
P

It is my belief that the "Yeager" is the father of the "American Long rifle", which existed for only a short time. Once the hunters, trappers and explorers hit the Mississippi and Missouri river the Yeager reappeared as the Hawken. Give the Yeager it's rightful place and call any custom rifle built for hunting and shooting in todays outdoors the "Great American Short Barreled Flintlock Rifle". Calling it a frankenstein is a disservice

"The Gunsmith of Grenville County" by Peter Alaxander is a good read, and good theory as to how the Long Rifle developed.
R

Maybe I was obtuse above, but I do not understand the historical basis for building “American jaegers” with very short barrels. I could get it if it was an economical rebuild of an old European rifle. I’m just not sure who would want one, why they would want one, and who would build it, and how it would be used.

I’d like to better understand the rise of the longrifle in America but there are limited early specimens, they are not dated or signed, and period accounts before those at Christians Spring offer no details of value. I don’t think Peter Alexander or any of us have more than some guesses. But the rise of the longrifle implies the decline of the short rifle.
Last edited: Oct 12, 2019