Over on the Lee-Enfield FB pages, one brave soul has posted some images of a relative's P53 rifled musket. The lockplate is marked Potts & H.......... which, to my mind is actually Potts and Hunt, a temporary partnership of two Englishmen determined to make a lot of money out of your combined miseries between 1861 and 65.

I found this on an auction site, and I offer my grateful thanks to College Hill Arsenal, whose site it is - 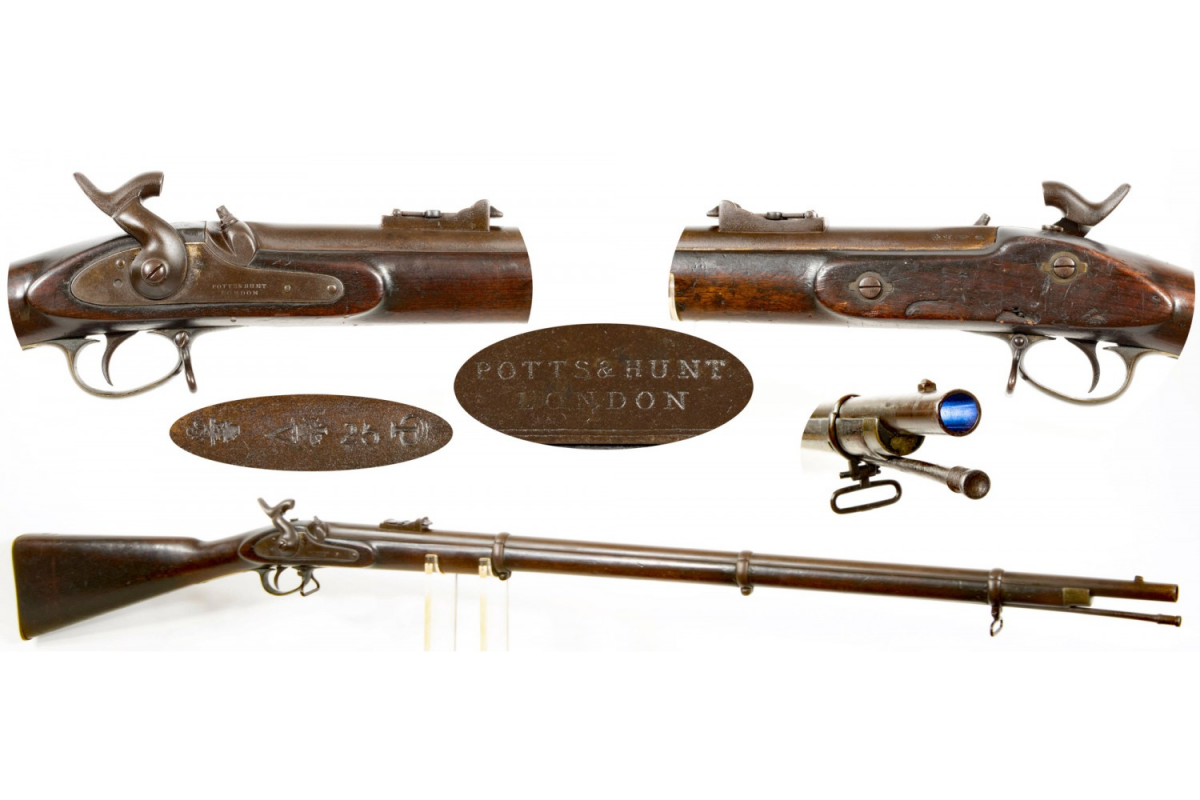 The Pattern 1853 “Enfield” Rifle Musket is often noted as being the second most used long arm on both sides during the course of the American Civil War. While Confederate marked Enfields are highly sought after by collectors, US purchased Enfields are often difficult to specifically identify, as they do not appear to have been marked with the myriad of inspection marks noted on the various Confederate imported arms. As such, commercial export Enfields without British military markings (from both Birmingham and London) are often generically thought of as “US imports”. According to Ordnance Purchases Document 99, the US Ordnance Department purchased 505,135 Enfield Rifle Muskets between 1861 and the close of import arms purchases in mid-1863. This number does not include the Enfields purchased by northern states such as New York, New Jersey and Massachusetts.
One of the London based arms makers that has always had a strong Civil War association was the firm of Potts & Hunt. The firm of Potts & Hunt was established in London at 27 Tenter Street East in 1854. The firm could trace its gunmaking lineage to Thomas Potts, who operated from 1828-1847 and was succeeded by Thomas’ son, Thomas Henry Potts in 1848. In 1854, Thomas H Potts and Thomas Hunt formed a partnership known as Potts & Hunt, and that partnership remained in business through 1867, when the partners split up and went their own ways. It appears that much of Potts & Hunt’s commercial production of Enfield rifle muskets (manufactured in the early 1860s) was sold to US buyers during the course of the American Civil War. Even William B Edwards noted in Civil War Gunsthat “While Potts & Hunt are characterized by Albaugh as “probably Confederate”, Colt was a contractor with Potts & Hunt and more likely the Potts & Hunt Enfields in the Civil War came to the North through Colt.” Colt had developed his relationship with the firm during his time operating his London manufactory. At the outbreak of the war, Colt had explored obtaining gun barrels for use in his US contract rifle muskets from the English gun trade. These 40” long variants of the P1853 Enfield barrel were marked with a <C>“Diamond C” at the breech. The Ordnance Department refused to accept these barrels on US M1861 contract rifle muskets, and Colt subsequently sold those barrels back to the English gun trade, where some ended up being used to assemble Confederate contract Enfield rifle muskets! It is generally believed that Potts & Hunt provided Colt’s entrée into the English gun trade and probably helped him make arrangements to buy, and later sell, the barrels through some of the Birmingham based suppliers.

In 1861, Colt received a contract to deliver 10,000 “Long Enfield rifles”at the rate of $22.50 per stand to the US Ordnance Department. Colt also received a contract to deliver 2,000 “Short Enfields w/ sword bayonet”at the rate of $25.00 per stand. However, Colt delivered just under half of those 12,000 long guns. The Colt Patent Firearms Company delivered only 3,120 “Long Enfield rifles w/bay.”and “1,940 Short Enfield rifles, saber bayonet”to the US Ordnance Department as a result of the 1861 contract. It is generally assumed that the 3,120 “Long Enfields” were sourced from Potts & Hunt. Of course, Colt was not the only buyer to obtain Enfields from Potts & Hunt, as the company sold the guns to all willing buyers on both sides of the conflict. Colt does, however, have a very strong association with the company.

Offered here is a VERY GOOD+, untouched attic example of a commercial Pattern 1853 Enfield Rifle Musket produced by the London firm of Potts & Hunt. The lock of the gun is clearly marked in two horizontal lines, forward of the hammer: POTTS & HUNT / LONDON. The lock has no other external markings but does have the traditional double boarder line engraving around the outer edge of the lock. In a completely non-scientific analysis of extant examples of Potts & Hunt produced Enfield rifle muskets, it has been found that the majority of the Potts & Hunt guns with southern or Confederate markings or attributions do not have this boarder line engraving, while most of the examples with the border line engraving that have any sort of markings or attribution have a Yankee association. The reasons for this are unknown, but it could be speculated that the non-engraved lock was minutely cheaper, which provided a noticeable saving across the purchase of thousands of arms. The hammer is the traditional “London style” hammer without the engraved “feathers” on the nose, but which has matching boarder lines engraved on the hammer body. The interior of the lock is marked P&H over the mainspring and with the initial of the lock maker, JB, upside down at the mainspring stud. The top edge of the lock plate bears the assembly mating mark \ \/. This same mating mark is found throughout the gun, with the exception of the rear lock screw, which is an old replacement that is marked \ \ \ \/. The left breech of the barrel is marked with the usual three London commercial proof, view and definitive proof marks, along with the gauge mark 25, which indicates .577 caliber. On London proved guns, the gauge mark is often found under the barrel instead of on the breech. The bottom of the barrel has the matching mating mark \ \/, and shows the usual assortment of maker, assembly and inspection marks. These include a P&H mark for Potts & Hunt, the same initials JB found in the lock, an illegible barrel makers name that is stamped awkwardly along the round barrel with only a small part of the lower section of the letters visible. The ramrod channel is stamped with the stock makers name that appears to read J WICKS, a name I have encountered in other Potts & Hunt stocks.

The gun has a thick, untouched and deeply oxidized brown patina with a slightly bronze tone. The thick oxidation is present on the exposed portions of the metal, with the barrel having a smooth pewter patina under the bands and under the barrel where the stock has protected the metal. The lock has the same, thick brown patina. The metal is mostly smooth with some scattered patches of surface oxidation, pinpricking and some light pitting which is mostly found around the breech and bolster area. The bore of the gun is in about VERY GOOD condition, with an evenly oxidized brown patina and strong visible rifling along its entire length. The bore also shows some scattered light to moderate pitting here and there. The lock of the gun functions perfectly and operates crisply on all positions. The gun retains its original long-range rear sight and the combination front sight/bayonet lug. All three of the barrel band tension screws are missing their original round screw keepers on the ends. The gun retains two period correct sling swivels, which might be original to the gun and might be replacements; it is impossible to know for sure, but they are absolutely correct. An original jag-head Enfield ramrod is in the channel under the barrel. It nearly full-length but is missing the threads at the end. The rod is slightly thick for the ramrod channel, and may be an old replacement, but is a period correct original rod that is appropriate for the gun. The brass furniture has a thick, uncleaned patina with dark ocher, brown and some dark greenish tones. The trigger guard is slightly bent, apparent damage from the period of use. The stock of the gun is in about VERY GOOD condition as well. The stock is solid, full-length and complete and is free of any breaks or repairs. The stock has a dark, uncleaned look with the appearance of burnished wood that reminds one of a banister rubbed by thousands of hands over many decades of handling. The overall appearance is really very attractive, and the patina of the wood matches the metal wonderfully. The stock shows numerous scattered bumps, dings and marks from service, handling and use, but still retains good edges and strong lines. There is no real indication that the stock has been sanded. The most notable wear to the stock is some splintering along the edges of the ramrod channel and some chipped loss around the pin in the stock that holds the trigger guard in place. As the trigger guard is bent, the pin may have been removed in an attempt to fix the trigger guard long ago. The chipping is very old and is likely from the period of use. The wood loss and wear along the rammer channel edges is quite typical of any muzzle-loading musket that saw significant service.

Overall, this is a really attractive, relatively crisp, 100% period complete and correct Pattern 1853 Enfield Rifle Musket by the well-known London gun making firm of Potts & Hunt. This is a straight commercial gun that never saw British military service and would be equally appropriate to represent a typical Civil War imported Enfield that saw service on either side. Every collection of Civil War arms needs at least one Enfield rifle musket, and this has a wonderful, fresh from the attic look that displays wonderfully, has no glaring condition issues and is fairly priced.
Last edited: Feb 22, 2021

SOLD Brown Bess - Made from Pedersoli and The Rifle Shoppe parts

G
What is a fair price for an original 1853 Enfield Rifle ?