All-day hunt: What & how do you carry your gear?

Spikebuck said:
Another great alternative that I love for when I'm carrying my smoothie with shot is this canvas bag. Lots of pockets to separate cards, wads, etc. 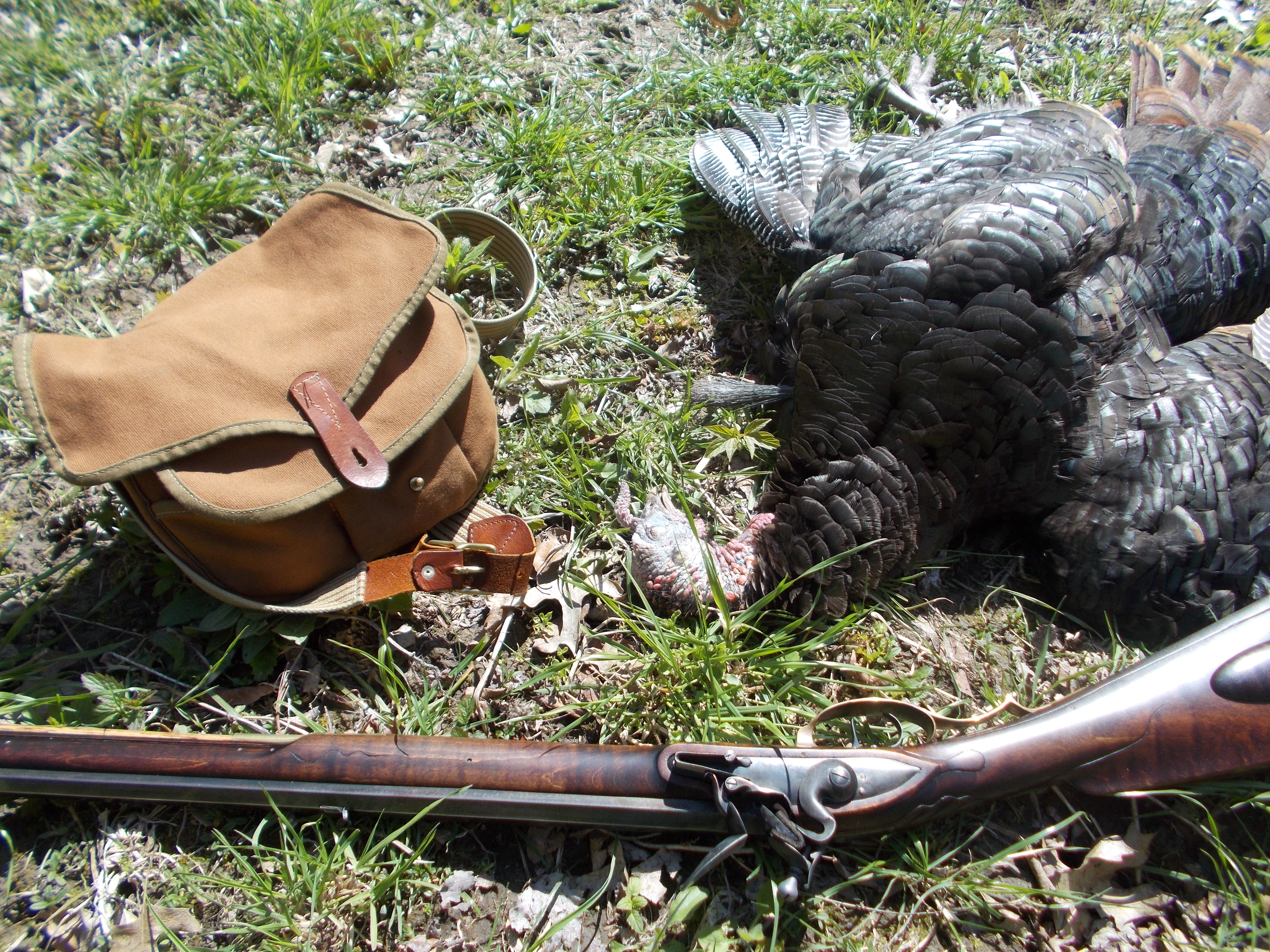 I posted the wrong bag link for the canvas bag with all the pockets for smoothbore loading needs. Here's the correct one:

Loyalist Dave said:
So I try the whole "traditional" route.

I wear 18th century clothing, with a layer of wool, with the outer layer being my hunting shirt. I attach a blaze orange cape to the hunting shirt, and have a blaze orange Voyager's knit hat. Although I'm mostly on private land, The State allows straight walled modern cartridges during "gun" deer hunting season, and they will reach from the near-by public lands to where I hunt. I'd rather discourage a shot in my direction than run that risk, OR cause a poacher to move off instead of taking a shot at the tan creature creeping through the woods.

I wear mits made from old knee high wool stockings. Wool leggings and mocs, but if there is snow I wear Hi-Low boots....

I carry my shooting bag and my hunting horn. Both are brown, although I have a lovely screw-tip horn that is white, but again, I don't think where I hunt it healthy to have a bit of white bouncing around on my hip in deer season. (I wear a blue linen shirt instead of a white one for the same reason)
The shooting bag carries my rifle gear, plus my skinning knife and a stone, my compass, and my fire kit.
A tin canteen carries my water.
My "mouse" 'hawk rides on the back of my hunting bag

I also carry a snapsack, with a change of wool socks, my drag rope if deer hunting, my first aid kit in a japanned tin, an extra, modern, orange knit hat (I'll explain in a moment), a bag with a half-pound of ground parched corn aka rockahominy (can be eaten cold or boiled) a smaller bag of raisins (not only sugar but potassium - wards of leg calf cramps ), a small a tin of tea, another of sugar, a few strips of venison jerky, salt and red pepper. I also carry two tin mugs aka "soldier cans" (One is modified with a bale so I can heat water over a fire, or lift it out of the fire using a stick). Tobacco and my pipe.

I load the snapsack as though I'm going to, for some unforeseen reason, get stuck in the woods overnight. IF I intend to go overnight, I'd also pack my wool blanket, and my oil cloth lean-to.

I like to stay hungry when hunting as I seem to be more alert when so..., but after the deer is down, I may be a bit spent hauling it out of the brush even if it only went a short distance, and I will very much be spent if I have a difficult drag from where I retrieved it to the vehicle. So the raisins and the candy help with fatigue, so does a cup of hot sweet tea. Caffeine helps too.

After shooting and reloading, I smoke my pipe. This, as with archery, allows the animal if I haven't made a serious hit, to lie down and expire. Then when the pipe is done, I start my track.

The extra orange hat carried in the snapsack is on the back of the tree where I'm waiting for the deer. I hunt from the ground, often in a natural blind, which means I use trees to break up my outline. Well the orange hat posted head high on the tree to my back, hopefully discourages hunters from tossing a shot in my direction, since the tree blocks them from seeing me wearing orange. When I'm trying to track, I move the extra hat to where I was when I shot. I've found being able to look backwards and spot where I was standing helps when I am locating where the deer stood when hit, and thus makes for easier tracking when needed.

Yeah it only took me 20 years to figure out to mark my spot so I can see it looking back while starting a track.....

One more thing folks...,
IF you happen to hunt in an area that is adjacent to a heavily traffic'd area, OR it is an area with heavy human traffic at different times, hunt ALL day.

I know this thread is about hunting all day and my previous post is what I take for the all day hunt, or any day hunt...

But when I write "heavily traffic'd" etc, I mean the deer have seen the farmer or farm hands, or recreational hikers, or it's next to a farm etc and there is a lot of human noise and human scent from time to time. Where I am the public areas are part of parks, and you get hikers and horse riders (some even in hunting season that hike or ride without orange, but that's for a different thread). OR I'm on private land bordered on one side by public and on two others by working farms....,

Where ya goin' with this Dave ?

I'm takin' the long way around the barn to stress that you shouldn't take a break in the middle of the day as I've seen a lot of "modern" hunters do. I've taken almost half of my venison between noon and 3 p.m. Especially in cold weather. What I figure is that the deer feed close to dawn, then if it's public land, in comes all the hunters, including me. Even if I'm quiet, I'm not that quiet, and the guys around me sure are not. Scent is kicked up from the forest floor too, as well as carried by the wind. The deer go to cover.

Maybe one guy, even maybe two get a deer..., then when the hour of 11 to Noon arrives, just about everybody leaves for lunch. Some guys only took a half day off from work. The rest will come back at about 4. Meanwhile it's cold and the deer need calories. They heard the grand exodus, and the human scent has died down. BUT HEY they're deer and they're not hiding in the thick brush thinkin' "I heard 8 humans come in but I only heard 7 humans leave." Nope, they only know it's much quieter, and the scent is greatly reduced.

My very first deer was a button buck at 2 p.m. on public land..., drizzling rain. I figure the drizzle and almost no wind scrubbed the air of any human scent. I stayed put and a lot of guys left....

Now you folks in actual wilderness hunting situations, might have different results, but if the whitetails have some regular human exposure, hunt all day.

Nuthatch said:
For the last couple years that I’ve done a ML hunt, I carry pretty much the same stuff as I do for a centerfire or archery hunt. The only difference is that I have a very small nylon bag on my belt for powder, balls & such. My reload times are slow but fast enough to not worry about it. For powder, I carry 5 plastic vials with pre-measured charges. This is for a backpack-in hunt for deer so I figure a handful of charges is plenty. Small game would certainly require more.
How about some of you? Do you carry a full horn & traditional bags? Describe the hunting you do and how you carry your gear. I figure I can learn from some of you who have been doing this a lot longer than I.
Click to expand...

As light as possible. Three pre-measured powder charges, three patched balls in a bullet board, knife, capper, compass around my neck, all else in pants or coat pockets. Real thick cover here, don’t need anything catching or snagging. I also carry a towel for cleaning up after rolling in the gut pile…