I found this article interesting, concerning the tradition of naming our guns. 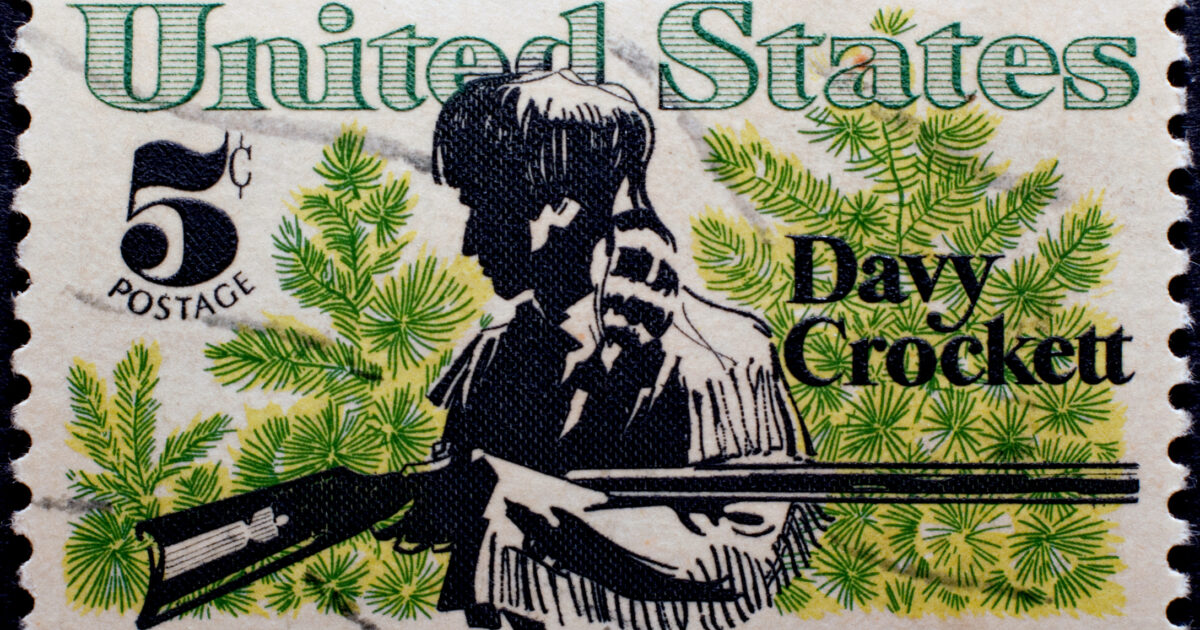 For some reason, the tradition of naming one’s favored firearm seems to have fallen out of fashion with today’s hunters. This wasn’t always the case.

If you look into the annals of history with an eye for firearms culture, you’ll discover many well-known nimrods who gave a name to a much-loved gun, including these renowned outdoorsmen.

Perhaps the best-known gun is Davy Crockett’s Old Betsy. Old Betsy was a .40-caliber rifle made by James Graham of Pennsylvania. She had a black walnut stock, with brass hardware and silver inlays. This was a particularly beautiful firearm, and one the poor Senator Crockett could never have afforded to purchase himself. As a member of the Tennessee State Assembly, Crockett championed veterans’ rights and made it easier for individuals to own land. So the constituents of Lawrence County took up a collection and presented him this rifle on May 5, 1822. 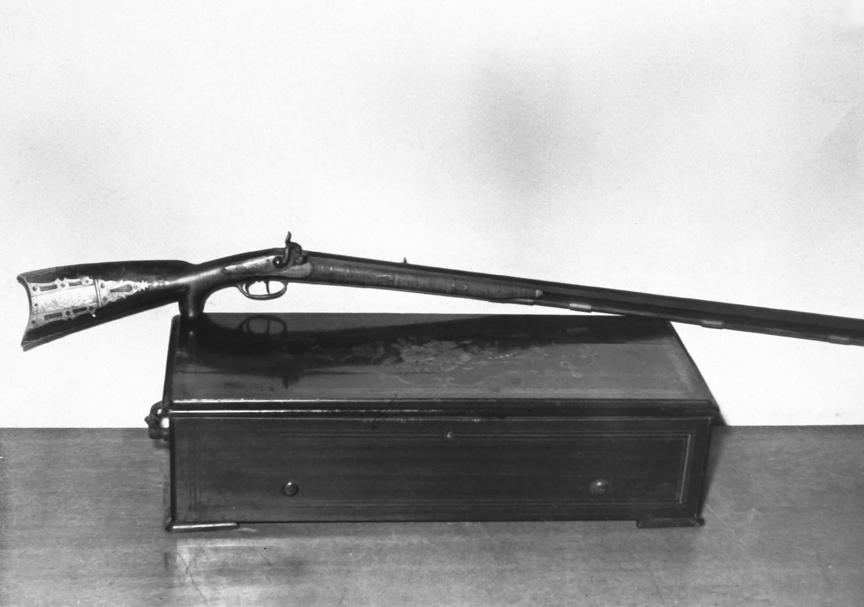 Much mythology surrounds Old Betsy. While it is accurate to say that Crockett killed more than 100 black bears with her during six months of hunting in 1825 and 1826, he did not use Old Betsy during the battle of the Alamo. Crockett left the flintlock with his son John Wesley upon departing for Texas. The original rifle, severely foreshortened and converted from flint to percussion ignition, is now displayed in the Alamo Chapel Museum in San Antonio, Texas.

Daniel Boone was another legendary hero who carried a flintlock rifle. Crafted by his brother Squire, a skilled gunsmith, this .44-caliber Kentucky longrifle stretched more than 5 feet and weighed nearly 11 pounds. Boone dubbed the gun “Old Tick-Licker,” boasting he could use it to shoot a tick off an animal without hurting the beast. By modern standards, it was a massive firearm, bulky and unwieldy. But it was one of the finest guns of its day, surprisingly accurate and crafted with the durability that survival on the frontier demanded. 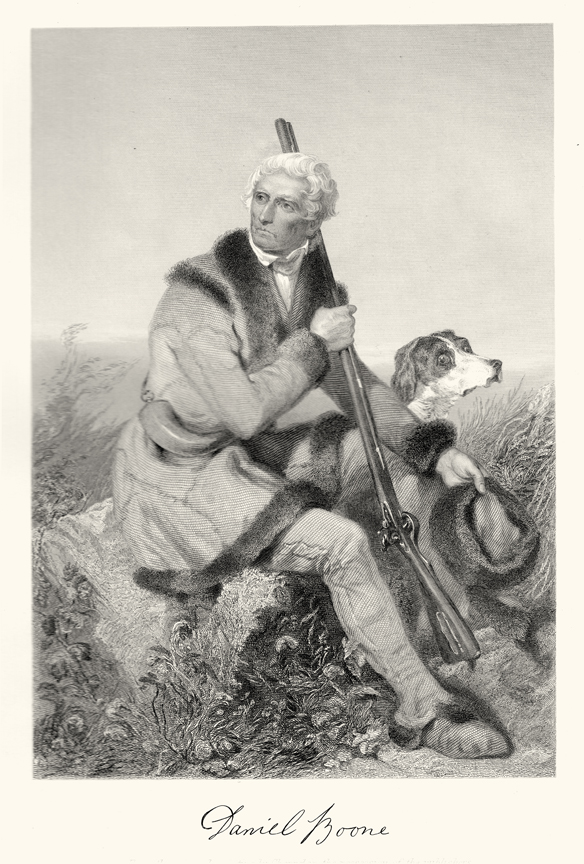 In this 1861 portrait by Alonzo Chappell, Daniel Boone is seen with his beloved gun “Old Tick-Licker.” In years past, many hunters gave names to their favored firearms.

“Lucretia Borgia” was a.48-caliber trapdoor Springfield rifle owned by Buffalo Bill Cody. Cody may have gotten the idea for the name from playwright Victor Hugo’s famed Lucretia Borgia. Borgia, the daughter of Pope Alexander VI, was described as a cold-blooded murderer in many dramas and books, and it is said Cody named his gun for her due to its deadliness.

Cody related details about the gun in a story told by Zane Grey in Last of the Great Scouts.

“I have killed over 40,000 buffalo, and most of them with that old gun,” Cody said. “…our term of service on the Plains covered so many years, and so many different kinds of guns came into use that we tried out this one, then that one. The Winchester was well liked, as was the Spencer carbine, especially on horseback, but they could not shoot alongside of the .48-caliber needle-gun. That carried 70 grains of powder and 470 grains of lead. ‘Shoot to-day!—kill to-morrow!’ was what the Indians called it.
“That was my father’s rifle, and I love that gun.”
Click to expand...

The best known gun in waterfowling history may be “Bo Whoop,” a 12-gauge magnum double-barrel owned by famed writer Nash Buckingham. Buckingham was a respected authority on shooting and hunting. In 1921, Western Cartridge Company president John Olin sent him an Askins-Sweeley magnum 12-gauge to field test the company’s new Super-X shotshells. Buckingham liked the gun so much he commissioned to build one for him just like it.

The shotgun Becker crafted to Buckingham’s specifications was constructed on a Fox frame with 32-inch barrels, which were overbored to deliver a 90-percent pattern of copper-coated 4s at 40 yards. Nash’s good friend Colonel Harold P. Sheldon called the gun Bo Whoop because of its distinctive hollow report.

Following a December 1, 1948 duck hunt near Clarendon, Arkansas, Buckingham was riding back to town with a man named Clifford Green when a pair of game wardens stopped the men and checked their licenses and ducks. Bo Whoop was laid on the fender of Green’s car after one of the wardens looked at the gun, and Buckingham didn’t notice it was missing until they had driven several miles away. Despite an exhaustive search by game wardens, police and hunters, and ads placed with local newspapers and radio stations, Buckingham never saw the gun again. 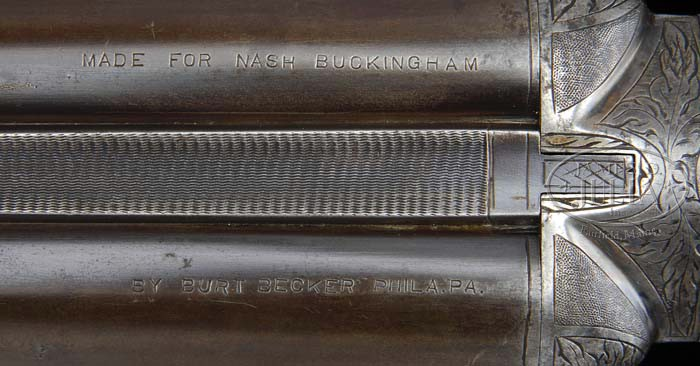 As it turns out, the gun was found and later sold with a broken stock for $50. The buyer kept it in a closet at home for decades, and in 2005, his grandson took it to a shop for repair where he learned its origin. In 2010, Bo Whoop sold at auction for $201,250, the third-highest auction record for an American shotgun at the time. The buyer, Hal B. Howard Jr. of Palm Beach, Florida, donated it for permanent display at Ducks Unlimited’s national headquarters in Memphis.

Outstanding in all respects

I have my long time friend Jim Cave's flintlock, a gun I sold him that was willed back to me, he called "Tic Toc".

I haven't really named any of my muzzleloaders but I do have a .270 suppository shooting bolt gun I call "Little Nan" after Alaska's famed guide Hal Waugh, a first cousin to my grandmother, who called his rifle "Big Nan", a .375 Weatherby.

It looks like Crocketts rifle had a back action lock and a pistol grip stock. It seems unusual for the period.

Only 25 miles or so too the South of Crockett’s Mill ,just across the State line of Tn/Al lies the small community of Greenhill Al. 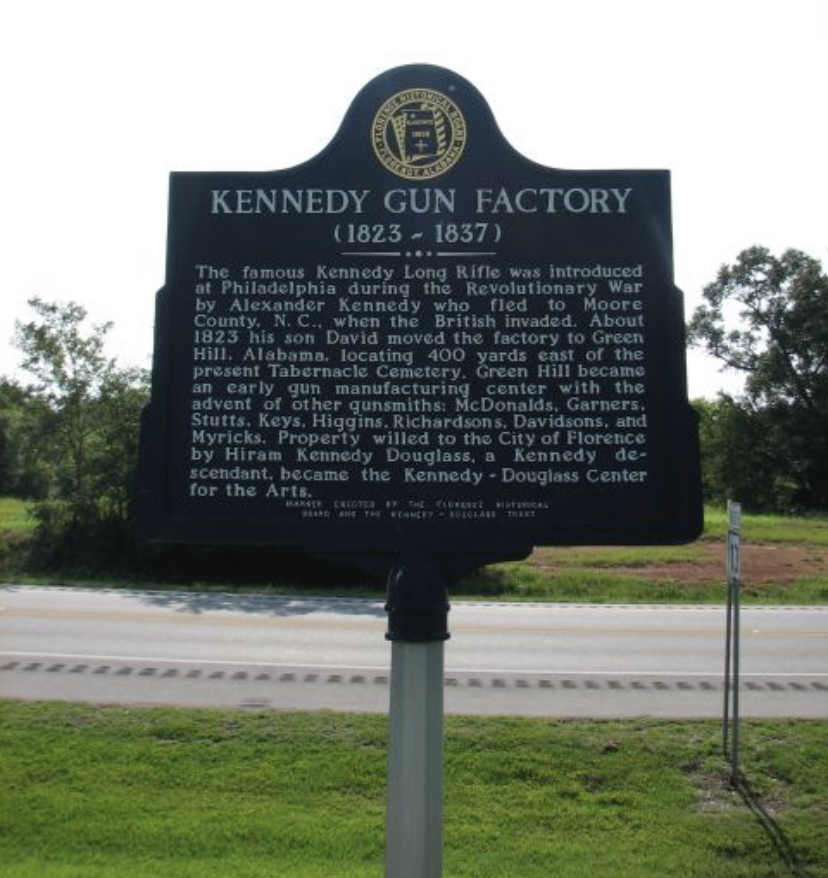 He could have owned one of these instead… 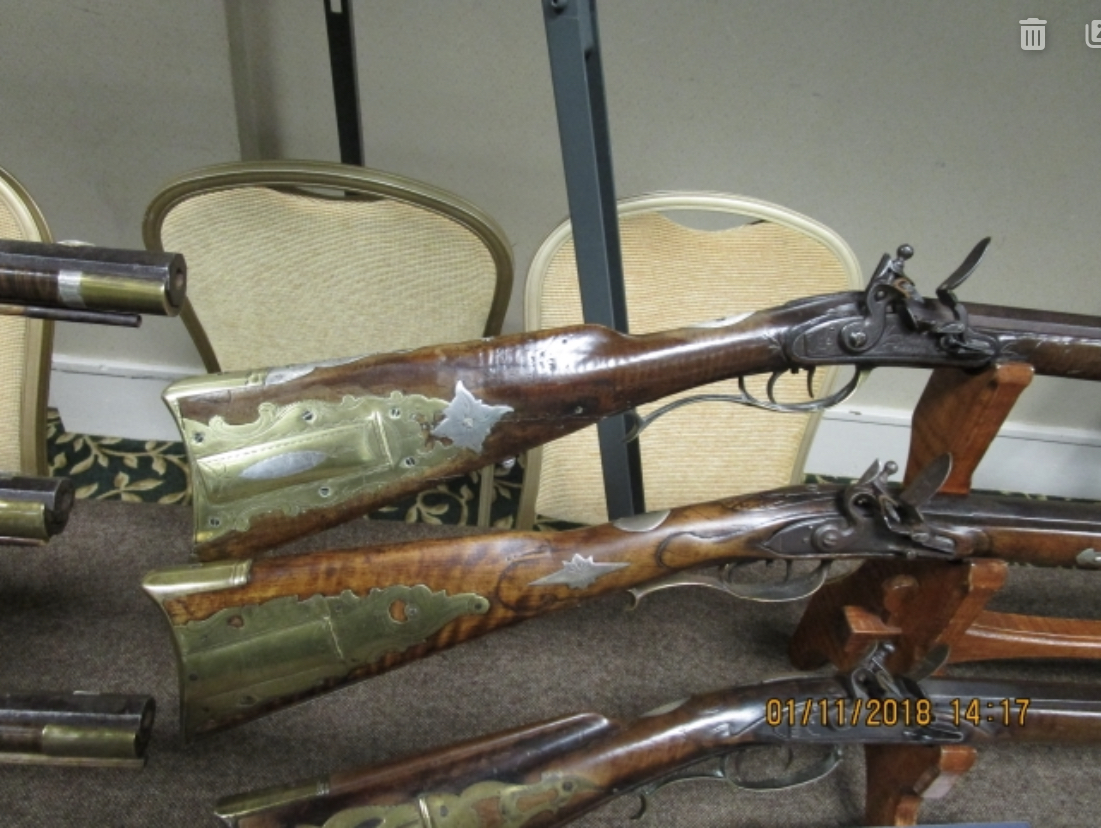 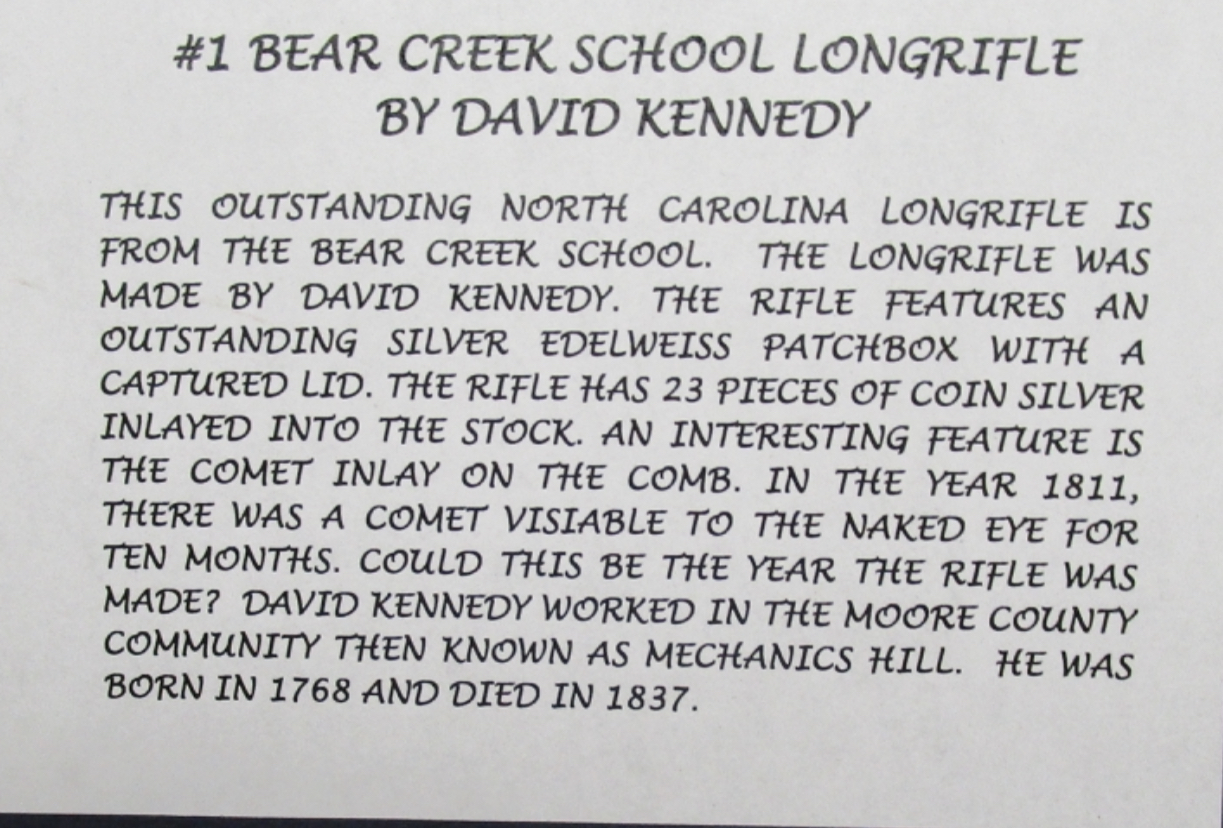 Very informative and well written article!
One Texas Legend, “Big Foot” Wallace‘s rifle had a peculiar name (to me). He named it “Sweet Lips”. Even though this larger than life character in Texas History could be considered just a little on the “eccentric“ side, I still find that name choice to be an odd one, especially for that time period.
When asked if he had ever been “lost” during his time on the Texas Frontier, after a reflective pause he responded, “No, but I was bewildered once for about 3 days….”
Never let’em see ya sweat Big Foot!

smo said:
Such a shame they had too travel so far for Crockett’s rifle…

Only 25 miles or so too the South of Crockett’s Mill ,just across the State line of Tn/Al lies the small community of Greenhill Al.

He could have owned one of these instead…

Omg the crown inlay gives me a 3d pain in my butt just looking at it !?

The Crisco Kid said:
It looks like Crocketts rifle had a back action lock and a pistol grip stock. It seems unusual for the period.
Click to expand...

But all that happened after his "Betsy" was buchered.

Whose gun was "The Dove"?

What always caught my attention regarding Crockett's rifle was the caliber. Not many today would hunt a black bear with a 40 cal. I always wondered if he double balled it for bear.

Crockett's 2nd wife was Elizabeth, is that were the name "Betsy" came from?
D

Supposedly it was his sisters name!

D.Summers said:
Supposedly it was his sisters name!
Click to expand...

I can understand the Betsy part, that came from a relative. But how about the "Old" bit?

The Crisco Kid said:
It looks like Crocketts rifle had a back action lock and a pistol grip stock. It seems unusual for the period.
Click to expand...

I can't tell you how many times I have seen that picture and just now realized you are absolutely correct! That does seem unusual for the early 1820's. I guess there were some English sporting rifles with back actions maybe be it was one of those reworked?