I obtained a rusted TC Hawken 50 cal barrel and had it bored out to 54 cal (mikes at .533) and would like to develop some shot loads; anybody have a suggestion? I plan on starting at 70 gr 2f and an equal volume of shot (7/8 to 1 oz) with wasp nest filler between the powder and shot, will this work?

fire bear, I have a 32 gauge shotgun that mics at .526. My current load is 60gr 3F or Pyrodex with 70 gr of shot. I use a 1/4 thick felt wad instead of wasp nest. I'm going to try the Skychief load next time I take my muzzleloaders to the range.

fb, I forgot to add since you have a smooth rifle, you could go a little heavier than my shutgun load.
F

Thanks Phil. By 70 gr shot do you mean 70 gr black powder volume or something else?
C

I think commercial loading runs from 1/2 to 5/8 oz shot. What you are loading is in the 20 gauge range. Being that it's a T/C with a heavy barrel essentially a 54 smoothbore, those loads shouldn't be a problem, but I'd be tempted to load it down and make a sweet little garden gun out of it, or shoot it as a smoothbore rifle with a single round ball.

fire bear said:
Thanks Phil. By 70 gr shot do you mean 70 gr black powder volume or something else?
Click to expand...

All firearms have their optimal loads and my load may not be yours. I’ve known people to use 2 ounce shot loads in a 20 gauge but I doubt they started there. I started at 55 grains of 3f and 3/4 ounce shot. I tried loads up to 70 grs 3f powder and 1 1/8 ounce shot. My optimal load for a pattern at 25 yards was 60 grains 3f and 7/8th to 1 ounce of shot. This is roughly between 24 to 20 gauge. I’ve found that different powder measures can be off. I have one that loads light. So if you use a powder measure for your shot, test your settings against a shot dipper.
Last edited: May 6, 2020
T

just use the tried and true, SQUARE LOAD. GOOGLE to DUELIST 1954 and MIKE BELEVIEW will explain it all to you.

fire bear said:
Thanks Phil. By 70 gr shot do you mean 70 gr black powder volume or something else?
Click to expand...

Yes, Phil means the volume of 70 grains of black powder.

Thanks to those of you that provided guidance on how to develop a load for my smooth bore. I have been to the pattern board twice now. The first trip showed me that the gun was shooting low. I had set up for a 25 yard test with a 8” paper plate setting on a 24” square piece of paper. I had shot a load of, by volume, 60 gr 2f with equal volume of shot. Then 65/65, then 70/70. When only 7 or 8 pellet holes are on the 8” plate it is disappointing. So, back home it was time to put on the thinking cap. I own a 16 ga so I know how important square to the bore can be but what is square to a .533 bore? Seeing that one company only sells ½ oz loads for a 32 ga figured I would start there and weighed out a ½ oz of shot. I then pored the shot into a clear black power volume measure and the shot leveled right at the 40 gr line. I followed that logic up to 1 oz and came up with the following loads:

The shot I used for these first 2 trips to the pattern board is recovered shot, different sizes and not all nice and round so I expect that the pattern will be a little looser than commercial shot. For both tests I was using paper tubes made by wrapping 20 lb office paper around an empty .410 case, white glue it together, gluing a ½ in cereal box over shot wad into one end of the tube then pouring in the shot against the ½ in wad and then shoving some hornets nest into the tube. The powder was loose loaded at the range. The loaded paper tube is dropped down the barrel over the powder and a heavy lean is given to the loading rod to crush the tube over the powder. 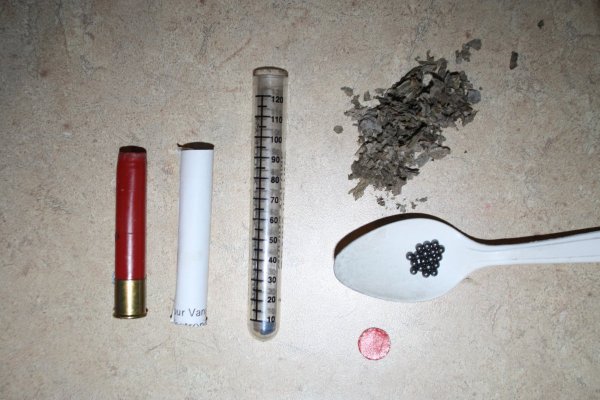 For the second trip to the pattern board I set up on the 16yrd board, raised the rear sight a notch and used one of the 70/60 and a 70/70 loads left over from the first trip. The gun was still shooting low so up another notch and take shots 3 through 7. Here are the results:

So it looks like I’m still hitting a little low and to the right (not sure I’ll worry about the right). The next step is lift the back sight another notch then try some commercial #5 shot with ½ oz to 1 oz loads again at 16 yards. 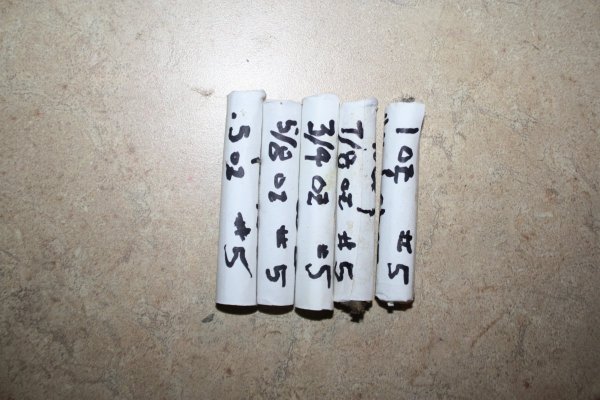 I’m not sure what your planning on hunting but the #3 load at 16 yds is impressive with 48 hits on an eight inch plate. That is a definite kill zone. Even the lesser amounts are not bad. Have tried the Skychief load?

Dump the fancy shot cartridge brother.
Tip an oz in and forget wasting shot and powder.
80gr to an ounce is quite strong in a .53.
70 to the oz is nominal unless the gun has a huge vent of course.
F

All I use in my 32bore sxs percussion is 1.1/2 drms powder to 1/2 oz of shot will kill crows and pigeons out too 30 yards just load powder ,card wad . felt wad , card wad , shot, card wad, that all that is required.
Feltwad
F

I made another trip to the pattern board with #5 shot, here are the results:

I’m not sure if I missed marked shot 2 at 60 gr instead of 50 gr or if I actually shot 60 gr when I should have shot 50; a look at the results makes me think I actually loaded 60 gr. I did everything else the same as my last trip to the pattern board (sorry Britsmoothy, I’m still using the cartridges; I don’t have proper wads and it is a way for me to keep the shot and hornets’ nest together.) On my next trip I’ll try some 7 ½ shot.
C

Looks like 3/4 ounce is the sweet spot, now you need to consider velocity and penetration.

B
Where to start working up a load?

M
Velocity testing part one: Fg vs FFg vs FFFg
2