Good for you on the hunt, harvest and the land to enjoy it on.
I have one of those Pederseli long rifles. It is called the Blue Ridge, if memory serves correctly, from Cabelas. Inherited it after a best friend died in the late 90's and have taken a number of deer with it. Started out using my T/C load of 65 grains (volume) FFFg and a T/C MaxiHunter with success, even though the twist is slow, as you mentioned. Then, after decades of only using my cast conicals in the BP rifles I wanted to try out the rb's my friend had cast for this particular firearm, as those balls had just been sitting in the drawer unused. Water jugs died at 100 yards with that same load of 65 grains of FFFg with the PRB, and so have deer. I realize it isn't period correct, but it is pretty enough for a factory rifle, carries really nice in the woods and has provided a number of memories over the years, as your rifle has, too. That is all we can ask for in this sport. Keep enjoying that land and don't let anything, even wind turbins, rob you of that joy.

Thank you Christophero, I have a Blue Ridge .50 flint and that was my first flinter. But as everyone always says you can’t have just one so I dived into the custom and semi custom ones as well!! Yesterday we had fog here so I was blessed to not see the turbines although I could still here them as the wind was blowing some. From our driveway at our North Place I can count 111 of those. I am trying so hard to come to terms with them but when I’m sitting in my deer stand in the riverbottom and I have the noise and the shadow flicker of the closest one to endure it sure makes it difficult to enjoy the tranquility of nature that I so much appreciated before it was taken away. All over money. So sad. Anyway, yes I am lucky to be able to hunt our own property anyway. Greg

My wife and I spent a week in the summer of 2018 with the motorhome sitting in the public campground at Winterset, which must also be very close to you. What beautiful country. We spent a few days just driving around going to the various "Bridges of Madison County" among the many other things to see and do in the area. Since many of the bridges have one out in the country quite a bit, I was just drooling as we drove around that absolutely gorgeous looking deer country.

So I am curious...how did the wind turbines affect wildlife? How far away are they from your farm? I've read about impacts to various birds of prey that might fly into them, but never really about game animals, so just wondering what you are seeing and why?

Nice place and a fine hunt. What's all that white stuff on the ground?

Spikebuck, Winterset is 18 miles east of our farm. The ground around there is even more beautiful than ours and ours is great! The deer hunting there is wonderful as I cut my teeth bowhunting in Madison County and spent many many times learning about the Whitetail Deer there! Since these turbines are brand new to our area I didn’t know what to expect. My deer numbers have fallen off from what I can see and since I am a serious deer hunter and a farmer I pay close attention to what is on our property. I believe also that it has turned many of the deer nocturnal. For a point of reference I passed up 6 bucks this year bowhunting. I haven’t filled my bow tag yet. In a normal year I will pass on 12-15 shooting opportunities before finally shooting a nice mature buck. I have not been seeing the number of does as well. As far as turkeys go out cottonwoods at the north end of the property is still the roosting area for a decent number of birds but the half a dozen toms that always roosted in the trees on the south end of the property have completely moved out. They had used that area for years. The closest turbine is a 1/3 mile from the river bottom on the south side of the property. These turbines sound like a jet flying over but just doesn’t ever go away unless the wind stops blowing. The turbine is 9/10’s of a mile from our house and we here it loud and clear when the wind is from the south or the west, which is a lot of the time. It doesn’t seem to bother the coyotes however. I will post a picture of our farmhouse if it is ok with the moderators. If not, feel free to remove it. Greg

Sparkitoff, that is tracking powder that I throw down over the entire farm to aid in the recovery of a wounded deer. It works quite well and I will sell you as much as you want for the right price!! Greg 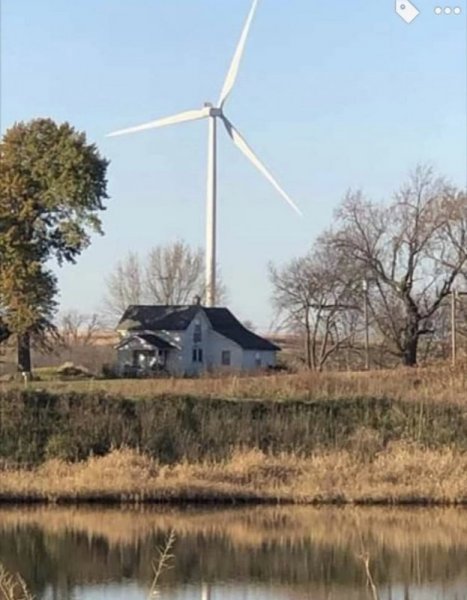 Wow...I had no idea that those wind turbines could be that loud. I wonder if it's the way the blades on those are set or what. We have a few wind turbines around here...a LOT of them as one moves West in southern Minnesota. I have been relatively close to some...well within a 1/2 mile, and I never heard anything, but as you say, perhaps the wind has to be blowing the sound your way. Now I can understand why so many people in areas where these turbines are going to be placed have big-time issues. Thanks for advising.

You are blessed to have a place like that to call your own.

You mentioned coyotes. That may be part of your problem.

No, we are not over run with coyotes but there are plenty enough to hunt. Most hunters wait til January and February to go after them around here. Greg
F

Critter Getter said:
Fireman Brad, that is about 45minutes sw of our farm. Good hunting there if you get the chance. Greg
Click to expand...